New Exhibit Reveals an Unexpected Side of Jacob A. Riis 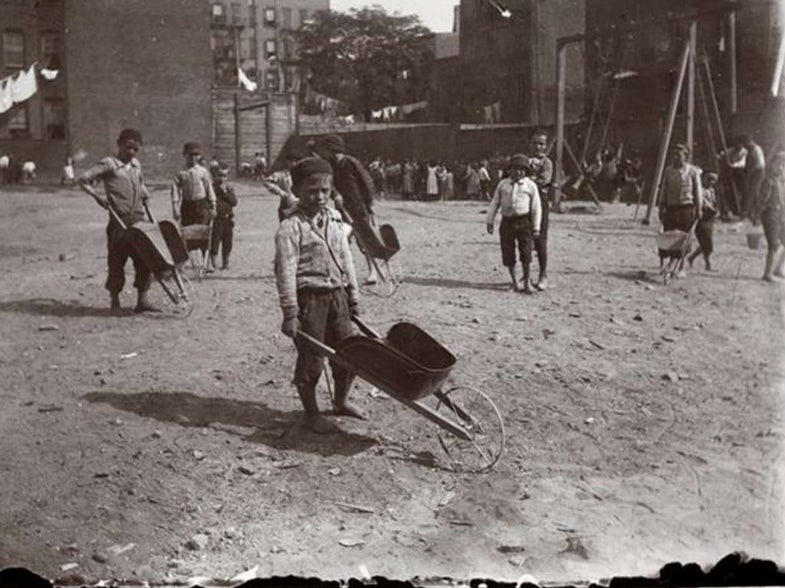 Jacob A. Riis is known to many as the father of photojournalism and a muckraking reporter who exposed the plight of the urban poor in the late 19th century. Riis’ many published works drove a movement to reform the housing and labor laws in New York City and across the country.

Today the Museum of the City of New York unveils a remarkably well-designed and curated exhibition, Jacob A Riis: Revealing New York’s Other Half, that focuses on the journalist’s photographic and written work.

Although Riis is often considered one of the first social documentary photographers, according to guest curator Bonnie Yochelson, he really considered himself much more of a writer.

“His real gift was as a storyteller,” she says.

His many published articles, books and a detailed archive of his correspondence make up about half the exhibition. Riis saw his photographs as tertiary to his larger enterprise and ultimately left his entire photographic collection to the ages in a box in his attic.

According to Yochelson many of the pictures associated with Riis were actually taken by other people. He was known in particular to work closely with two amateur photographers, Henry Piffard and Richard Lawrence and a handful of the images presented in Riis’ most well-known work, “How the Other Half Lives” were actually taken by the duo. “The idea of authorship was not important to him,” says Yochelson of Riis’ use of photography in his investigations.

The show is smartly laid out, featuring a variety of his photographs in long glass displays inset in handsome wooden polygons. Of Riis’ photographs, you will find mostly contemporary re-prints made by Chicago Albumen works as very few original prints exist. The newer photographs were made to accurately reflect Riis’s original images, which in the past have been cropped, embellished and blown up.

Amidst the photos, letters, articles and books, you’ll also find a powder tray which Riis used to ignite the explosive powder which illuminated his subjects and made much of his work possible. Also on display is a “magic lantern,” a type of antique projection display that Riis used frequently. Riis used this device to give travelling slide shows that he narrated to advance his journalistic mission. The original lecture was recorded just once when he visited Washington D.C., showed approximately 100 slides and would become the backbone of How the Other Half Lives. Yochelson was able to match photographs from the museum’s collection with the images referred to in the Washington script. Voice-over and foley sounds from the magic lantern’s operation bring Riis’ words to life.

Although Riis may not conform to some modern conceptions of a photojournalist, the exhibition’s incorporation of audio-visual and written works effectively paint him in a very contemporary light. Much as today’s reporters must work around increasingly diverse formats for reportage, Jacob Riis made use of every technology available to him to investigate and disseminate his work. “He was a media-savvy journalist,” says Yochelson, “I think TED talks would thrill him.”

Jacob A. Riis: Revealing New York’s Other Half is on view at The Museum of the City of New York through March 20, 2016.