Publisher Mubarik Jafrey discusses the first magazine of its kind 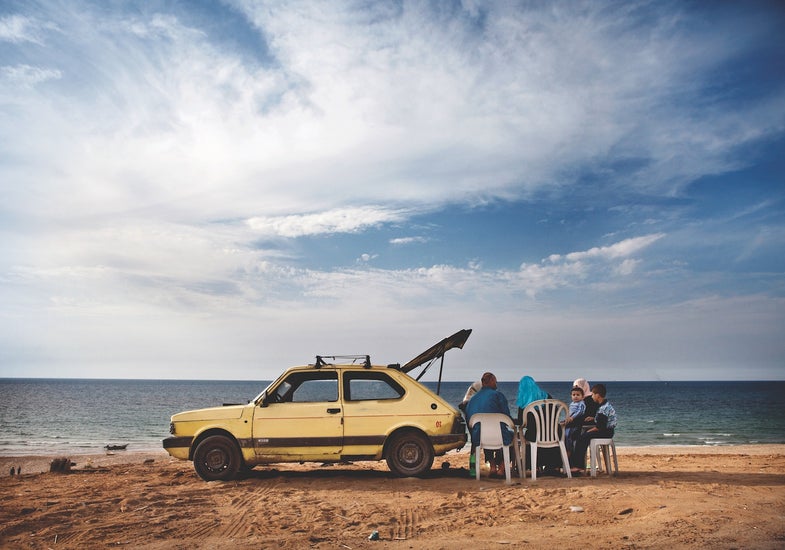 A family in Gaza City enjoys a picnic on the beach. Tanya Habjouqa
SHARE

I first met Sueraya Shaheen and Mubarik Jafrey during Dubai’s first ever international photography showcase, the Dubai Photo Exhibition. They were carrying copies of their magazine, Tribe, around in a backpack, looking to attract new readership one person at a time.

The Dubai-based Tribe is a small operation with a big mission. As the world’s first—and so far, only—magazine devoted exclusively to photography from the Arab world, it’s uniquely concerned with a vast and diverse region where the talent is plentiful, but artistic institutions and international attention are just beginning to catch up.

But Shaheen,Tribe‘s photo editor, and Jafrey, its publisher, are excited about the evolution and they—along with a growing roster of international contributors—want to cheer it along as it progresses. Like the first-of-its-kind photo exhibition where we met, they hope their magazine is a sign of the sea change that is making photography a signature attraction in the region’s art world.

Tribe published its first issue last March and has published two since then. It intends to release another every three months following its upcoming June issue. The issues are substantial—more than 100 pages each—and glossy, printed on heavy paper stock, It’s the sort of product that might seem better suited for a coffee table than a magazine rack. They are printed at a run of 2,000 and can be purchased for $15 an issue by writing subscibe@ink.ae. Tribe can also be read online for free.

For Shaheen, who was born in Lebanon to Syrian parents and left the country in 1975 at the outbreak of war, Tribe isn’t just about photography; it’s about shifting the story on a part of the world whose darkest moments typically attract the brightest global media spotlight.

“The region is always in the news, but rarely in a cultural context. Someone has to develop that narrative and re-edit the perspective, so to speak,” Shaheen said via email.

Here, publisher Jafrey speaks with American Photo about Tribe‘s journey, and the state of Arab photography.

When and how did you and Sueraya get the idea for Tribe?

It was at a gallery in Dubai back in 2014. We were walking around, showing a visiting photographer around town, and it occurred to us that there were no photography magazines in the region, which was strange. So we decided to go ahead and make one. Sueraya and I both live in the art world and know a lot about the art ecosystem, so naturally we went for an art photography magazine. My day job for the past 12 years has been in brand development and publishing and Sueraya is a well-known photographer who consults on the subject. It was a perfect match.

Initially, what was your vision for Tribe? What purpose did you want it to serve?

We looked at it as a platform to showcase Arab photographers, but as time went on we started also thinking of it as an archive. We want Tribe to serve as a point of reference for art photographers in the future looking at this moment in contemporary photography.

What does the “Arab world” of photography consist of, in Tribe’s view? Does it include Arab photographers living in different parts of the world? Or people of Arab descent who are based in say, the West?

The Arab world, for us, includes photographers of Arab descent living within the Middle East and North Africa, as well those in the diaspora. Eventually, we’d like to integrate photographers of non-Arab nationalities who’ve made Arab countries their home and made the Arab world their subject, but currently, limiting the content to Arab photographers really plays to our strengths.

When we started working on the magazine, people told us we were going to run out of Arab artists to feature after the first five issues. But not only have we not run out, we’ve not even scratched the surface. We’re literally just catching up with the people who’ve been doing this for so long. I can’t wait to start talking about the young kids, the new artists. Right now, we’re just covering what’s been going on for a long time.

Tell me about the name of the magazine, Tribe. How was it chosen?

In one way or another, we are all part of a tribe nowadays. We bond with stuff and people and we come together over those things. We are a tribe of artists, a tribe of creatives, a tribe of photographers.

What’s Tribe’s intended audience? Is it an Arab audience? An international audience?

It’s both, but primarily the audience is regional and secondarily international. We are trying constantly to reverse that order.

Starting a print magazine is a risky proposition. Why did you want to produce a print product rather than starting online?

The decision to print was very easy. Niche anything is alive and kicking more then ever. There is a lot of value in it. In a way, if photography is a niche, we are a niche within that niche. Moreover, we are a photography magazine with photographs that are meant to be on paper, so it just needed to be a print publication. Both of us had complementary skill sets to make it happen. Print is not dead — yet.

We have distributed the magazine by building direct relations with outlets, bookstores, museums and galleries. Both of us travel a lot. Whenever we go to a place we scout out locations and reach out to them to show them the magazine. We are very small and in a very early stage, so we have to be smart about how to keep stock and rely on friends of the magazine—even some pilots—to drop off the magazine in places as far away as Mexico and Los Angeles.

Photography, in Europe and the United States at least, has come into its own as a force in galleries, auctions and museums. To what extent has that happened in the Arab world? Has it been on the same sort of timeline?

Photography has been integrated in our society here and the Arab world has a rich history of studio photography. Today there are more photographers coming out of the Arab world then ever before. Almost every art gallery in the region represents photographers. There have always been artists producing lens-based art and using cameras as a tool. Everyone seems to be a photographer here.

The Arab world is so large and diverse. How do you decide what’s important among such a wide area?

We look at the work not really thinking too much about where it was made. We look at the various culture hubs in the area and see who’s making noise. We also hear about artists from other artists and have moles in the art schools!

In the latest issue of Tribe, which was launched to coincide with the 10th anniversary of Art Dubai, the editor’s note read, “Like many of the galleries and initiatives that took off, the last decade has paved the way for this publication to be realized and have a growing audience on paper and online.” Tell me about the kinds of milestones you’ve seen in Dubai and beyond that have made the magazine possible.

The whole art ecosystem is escalating here. Galleries like East Wing and The Empty Quarter have opened up locally, and in the last few months, we’ve seen so many fine art printers popping up around the city. There are a number of new museums in the region showing photography, like the Mathaf: Arab Museum of Modern Art in Doha and the Marrakech Museum for Photography and Visual Arts. This year there was the first Arab contemporary photography biennial in Paris during Paris Photo and Photomed Liban is an annual thing. Photography is increasingly accepted as an art form, and there are more and more solo exhibitions of photographers who are presenting strong, consistent work.

Leila Alaoui was a brave woman who gave a voice to those who didn’t have one. Like Leila, the photographers we know are fearless and they’re really pushing the boundaries. I think, for them, they’re most concerned about just going ahead and saying what they feel they need to say, whether that’s about politics, education or sexism. I think the region is nurturing and celebrating their accomplishments.

What do you hear from the photographers you work with about the challenges of free expression in parts of the Arab world?

There really is nothing stopping any kind of an idea from being developed. One just has to be logical about what one chooses to show and where.

What are your hopes for the magazine? Any plans to increase circulation, focus on an online counterpart, etc.?

We are systematically working on being more international and taking the work across the world! We want to make Tribe a international platform, not just a regional one.