Interview: Sara Lewkowicz on ‘A Portrait of Domestic Violence’

Shane continued to scream in Maggie’s face as Memphis wedged herself between them. At some point, the toddler had stopped... 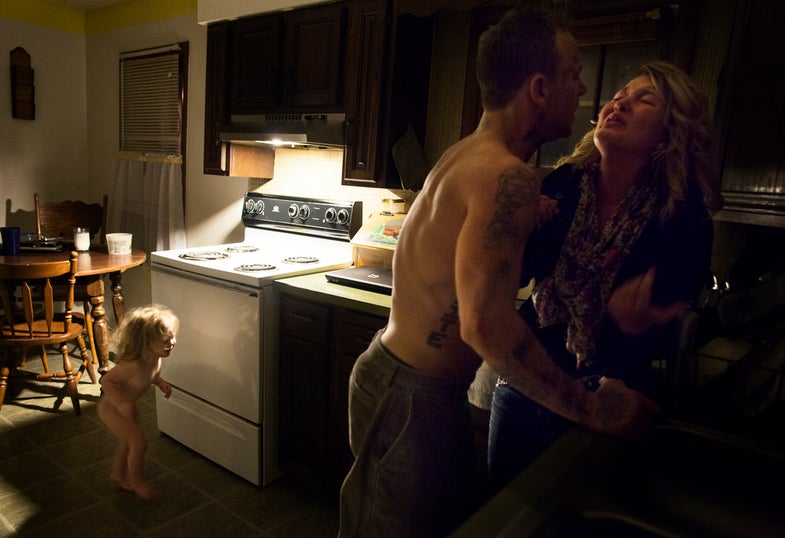 As Shane and Maggie continued to fight, Memphis ran into the room and refused to leave Maggie's side. Shane continued to scream in Maggie's face as Memphis wedged herself between them. At some point, the toddler had stopped crying and began trying to soothe her weeping mother. Sara Lewkowicz
SHARE

Shane continued to scream in Maggie’s face as Memphis wedged herself between them. At some point, the toddler had stopped crying and began trying to soothe her weeping mother.

Grad student and Getty Reportage photographer, Sarah Lewkowicz, won first prize in the 2014 World Press Photo Awards Contemporary Issues category with her series “A Portrait of Domestic Violence.” She shared with us some background on the project.

How did you get started working on a project with the couple? I had met them at a local fair while I was working on a project of my own. I had an idea to do a story about recidivism because the guy, Shane, had been in and out of being incarcerated a lot. My original goal was to document the difficulties that felons face trying to stay out of jail. It kind of become something else in one evening, very quickly.

What drew you to them as subjects? I saw him first. He has these tattoos on his neck and I was curious. He was holding this little girl and it was really this fascinating juxtaposition, so I wanted to take a picture. I just walked up and asked.

For many aspiring photographers, the approach step is one of the most challenging. Do you find it difficult to approach people you want to be your subjects? I’ve always been a pretty outgoing person. But, even being outgoing, it’s not that you’re not anxious or afraid. I get afraid of approaching people, too. It’s more about what you do once you have that fear. Do you push past the anxiety or do you let it control you? For me, if I get an anxious feeling about approaching or calling someone, I usually take that as a sign that I should definitely approach them.

I’ve learned to kind of tell the difference between my own social anxiety about approaching somebody and the little voice in my head that says, “This person might cut your face off. Don’t talk to them.”

That instinct seems crucial to work like yours. It definitely is. Part of that whole equation is developing your instincts about people. That’s something that human beings in general should try to work on. I generally have pretty good instincts about people so I feel comfortable trusting myself. Even with Shane, whenever I would go to their house to photograph them I would always tell my roommate where I was going and how long I planned to be there. There was something in my gut that made me want someone to know where I was when I was around this guy.

I couldn’t tell you why I felt that way. I knew he had a lot of problems and it’s generally just best if someone knows where you’re going.

How did your relationship develop with Shane and Maggie? I took the first couple photos and then ended up spending a few hours walking around this fair talking with them. They were very open with me. Because of that openness and because we spent so much time together, it kind of clicked. I felt comfortable asking if I could come to where they live and continue to document what they were going through and what they were struggling with. I always make it clear to people that I’m not there to judge them. I’m there to try and understand what goes on in their lives.

How much time were you spending with them?
I was doing it in between my actual school assignments, so it wasn’t as much as I would have liked. But, even when I wasn’t physically with them, I would talk to them a lot. I would text them and talk to her on the phone. I made it a point to keep up with what was going on in their lives.

Part of the reason I chose this project was because of their openness and their honesty. I didn’t have to pry. I don’t like to pry for information about people’s lives. I’m there to listen to them. I give them information about me. If a person is going to be open with you, that’s why.

So, it’s a real personal relationship, not just artist and subject.
I didn’t just give them a buzz when I was free to go take pictures. I took the time to really get to know them and talked to them a lot.

Did you know things were getting to a boiling point before the night when things blew up? The night before that, I had been talking to maggie while she was at work. She had been saying to me that they were having problems and had been arguing a lot. I don’t know what made me ask this, but I asked if he had ever hit her. She said no, he had never hit her, but he had shaken her by her shoulders and dragged her across the floor by her hair. When I heard that, it made the hairs on the back of my neck stand up. It set my alarms off.

The following night, I was with them at the bar and there was definitely tension right from the beginning. Shane wanted things to be done the way he wanted them done. He wanted to do what he wanted to do. He was this overwhelming force. I was getting the sense that at first Maggie was seduced by that. He’s a good looking guy and he has such a powerful, charismatic way about him. But, I got the sense that by that point she was starting to feel bullied and she didn’t want to be dominated and pushed around like that.

She had begun to push back a little bit and that was when the tension started to rise.

What was going through your mind once the actual abuse started?
Honestly, you never know how you’re going to react until you’re there. It didn’t really seem real. I would have thought that I would shut down around something like that, but it was actually kind of the opposite. I got really calm. I just started trying to think very logically. What needed to happen right then. That was when I realized he had my phone and I had to reach into his pocket and take my phone back and tell somebody to call 911. As soon as I knew somebody was doing that, I knew I needed to keep shooting. I was going to keep shooting until he told me to stop or he hit me.

Were you expecting to get hit?
I remember thinking to myself that I needed to prepare because he might turn around and break my nose. The guy clearly didn’t have a problem swinging on a woman.

You fell like you’re looking at an illustration, but you’re not. It’s actually happening. It’s very surreal.

It sounds very surreal. And yet, it’s very much a reality for many. For so many people, that’s their life. I got so many emails from women — and a few men — saying, “that was my life for years.” It has been amazing how many people saw those photos and it somehow made them feel a little safer to confess these things. There’s typically so much shame associated with it.

Did you go home and look at the photos right away? Or did you let them sit for a while? The night that it happened, I stayed with Maggie. She couldn’t drive because she was too shaken up. I asked her if she wanted me to take her to a friend’s house, so I took her and the kids. She wanted me to stay and didn’t want to be alone, so I slept on one couch and she slept on the other with the kids. The next day, we spent the whole day talking and I took her to a battered women’s shelter to fill out an application. She wasn’t sure if she was going to go back with her family or go to a shelter. She didn’t know if he was going to be let out. There were a lot of variables.

At the end of the day, I drove back to Athens and I went to bed. The next day, it was time to go back for maggie’s daughter’s birthday party. She was turning two. I didn’t look at the pictures right away. I knew what was on the camera, but it wasn’t the first thing I was thinking about.

Looking through many of the other World Press winners, a large portion of them are from international locations. It’s interesting to see a domestic documentary project take top honors.
In a way, we’ve developed this idea that violence only happens in foreign communities of color–that brutality isn’t something that we do here in America. It is, though. We can be brutal. This is not something that’s specific to one place in the world. We’re brutal to each other everywhere.