“It was a crazy piece of luck and I ran with it,” says Joel Meyerowitz. Fresh off a dream advertising... 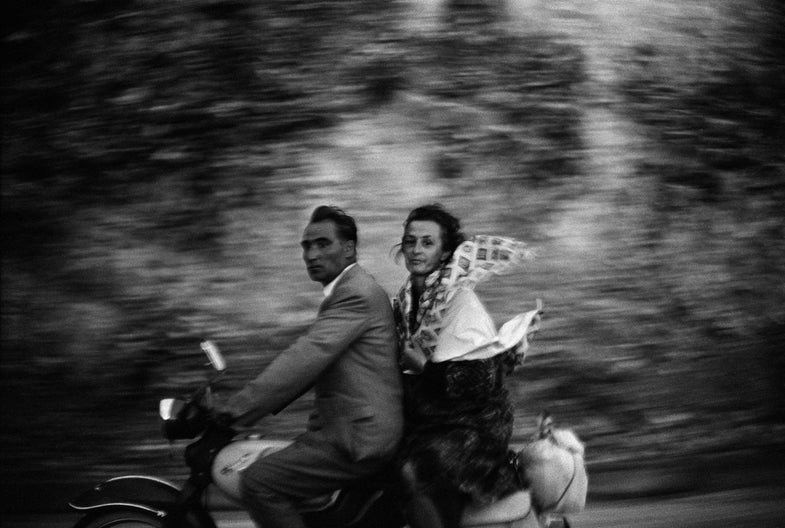 “It was a crazy piece of luck and I ran with it,” says Joel Meyerowitz. Fresh off a dream advertising job that in 1965 paid $29,000 for a week’s work, he and his wife at the time decided to run away to Europe for a year. For the young photographer, whose highly acclaimed career today spans more than five decades, “it was like giving myself a Guggenheim or a Fulbright.”

Over those twelve months driving daily, up, down and across the the continent with a Leica in his lap, Meyerowitz took thousands of pictures from inside of his car — “life along the roadside whizzing by at 60 miles per hour.” When he returned, he showed the work to John Szarkowski, the hugely influential Director of Photography at the Museum of Modern Art, who looked through a few hundred and said, “lets do a show.”

Now through the end of May, Howard Greenberg Gallery in New York is reviving European Trip: Photographs from the Car, the iconic and unconventional series which hasn’t been seen it its entirety since the 1968 debut. Meyerowitz spoke to American Photo via Skype from his studio in Tuscany this week about his intentions for heading abroad, manipulating his Leica behind the wheel of a car and exploring the risks and mysteries of the medium.

What do you mean when you call this your “first conceptual work”?
What had happened for me was that in 1964, I took a trip around America. Like so many of my generation we were in search of Robert Frank — to see the America of our moment. I think many of us had the same ambition to go on this quest because we saw that photography could really be a larger statement than just a couple of interesting photographs, that you might be able to say something about the time and the place you’re living in.

On that trip in ’64, I found myself shooting out the car window — I had a Volkswagen Bus with that big window up front — and everything seemed so immediate to me. As soon as you passed something, there was no going back. I made a bunch of those pictures and they stayed in my mind. So when I found myself going to Europe for a year spent sitting in a car, I thought to carry the Leica in my lap. When something happened outside the window, I just reached for it at a 1/1000th of a second.

After a few weeks of doing this on a regular basis, I had the sense that I was inside the camera, that the car was the camera obscura and I was in it looking out the window, which was a frame. I didn’t know what I was capturing, but I kind of accepted it as a phase that I could work in. If I carried the camera every day and every time I drove in the car I took pictures from that position, I’d make thousands of pictures. I thought out of those thousands of pictures, something would arise that was genuine. I didn’t invent shooting from the car, plenty of other photographers did it before me, but I don’t think anyone ever did it with that kind of intensity or focus. It was just a picture here or a picture there in passing.

Was it your plan to exhibit them as a series from the start?
No, I was just making the work because I was in the car and life was whizzing by and the only way to reach it in passing was to go, “click.” In a way it was like a gesture of recognition that there are things that fly by faster than we can really consider. They’re only pure instinct really. I didn’t see any of those pictures for a whole year because I was living in Europe and I wasn’t processing film. I was going on sheer faith that I was getting something.

When I came back to America, I processed all my film myself, I started making my contacts and then my prints, and I was on fire. Immediately I saw quirky images that were fragments. This is what was a conceptually interesting thing to me at the time. I kept on thinking to myself, only the camera can stop this stuff that’s flying by. It’s like the camera tears a fragment out of the continuum and that fragment, if you can fix it at 60 mph so that it’s frozen and sharp, is a very Modern concept — we live fragmented lives.

So here I was feeling the urge to be reaching for something that was passing by that I hardly understood. Instinct was telling me, ‘reach for this, reach for this.’ I didn’t have time to think about it and move around and strategize with it the way Cartier-Bresson might have done, or Robert Frank. It was a very from-the-gut kind of response. I think all of that made it seem like a conceptual practice to me at the time.

When you took your American journey, you were engaging with the Robert Frank narrative, the frontier narrative, the West. When you took your European trip, what was on your mind?
I was young enough to want to know something about myself in the world at large outside of my comfort zone. I wanted to go to a place where I didn’t speak the language, where I didn’t know the culture or the kinds of activities that went on or the significance of gesture, for example. You know, when you travel throughout America — you travel to Texas or Southern California or Minnesota — you’re recognized. Even though they’re regionally different and maybe even the jargon or the way of framing your ideas is slightly different because it’s a different state, nonetheless, you’re recognized because you’re an American. There’s a kind of consistency. But you take yourself and throw yourself into another culture, by living with Gypsies in Spain, lets say, as I did for six months during the trip, and everything is new. I really wanted to get away from my familiar tactics and my familiar understanding of the American system, the American way of life, to see what the rest of the world looked like and what it would teach me about myself. That’s the real adventure, to see how much you can change.

There’s a common critique of the American experience abroad; it’s thought of as shallow and superficial — ‘tapping on the glass,’ so to speak. Were you engaged with that idea, that this type of American ‘Grand Tour’ is thought of as touristic?
I certainly was aware the role that tourism plays and the kind of blindness that affects the short-term traveler where you see only the superficial, the surface of the place. The question for me was how do you get under? How can you peel away the seductive quality of the ancient history and drama of European life? They’ve been there for thousands of years with their temples and their myths and their regional beliefs, all of their interlocking cultural connections because so many warring tribes had moved back and forth across that continent. You could be as far south in Spain as I was and there was both Moorish and Greek and Italian influences. I mean, there they were, aqueducts from the Italians and also water systems from the Moors and the residue of Greek architecture. It’s astonishing to come across these things.

To struggle against that influence, the delights that history provides, to try to see what’s really there, required staying in place for a while. The six months in Spain grounded me because it helped me peel away the superficial things. And even though we were staying put, I was nonetheless driving every day and making these pictures. I felt that I was looking at the absurdity and the darkness of Spanish life seen through the filter of the Gypsies who consider themselves outsiders. In a way we were fortunate to have penetrated the culture and lived within it.

You made over 2000 exposures. You exhibited about 40 photographs. Still, there’s quite a bit repetition throughout and variation on the same themes — planes, trains, automobiles, big skies with a sliver of ground. I took this to be suggestive of life on the road, which can be very exciting, but also monotonous. Tell me a bit about composing the work and editing the final sequence.
If you’re a photographer, you can appreciate that the limitations are: you’re in a car, you’re traveling and you have to make the most of what you have. You have to deal with what’s out the window. You can’t wish for something. You’re always at a distance and I was drawn to that. It must be the landscape photographer in me that recognized something about scale and space out in the wilderness.

I remember coming back from the trip in ’64 and showing some of those pictures where I wasn’t on the street and I was driving through the open spaces of the West to Garry [Winogrand], who was my closest friend at the time. Garry didn’t get them. I showed them to John [Szarkowski] and John got them right away. He said to me: ‘you know, the sign of maturity for a young photographer is the willingness to step back instead of always pushing — the subject, the street — into the face of the viewer. There must be this willingness to look at things through their own way and trust that the reader would be interested enough in the photograph to actually take the trip in and read something small and far away.’

What John said validated the guttural impulse I was having to take these pictures from the car. He taught me to be willing to let the shutter fly. I came back to him after Europe with a few hundred of these and he was amazed; he turned to me and said, ‘let’s do a show.’

It was a kind of test: can a photograph hold up with that much openness in it? That much nothingness? Well-described but yet empty? The question is, why was that so appealing to me? I have two sides of my personality. I like to mix it up on the street, close in and complicated, but I also respond to things that are spacious, diminished and far away. It’s about trust and it’s risky, but I think the more you work with risk as a photographer, the closer you get to the mystery of the way the medium works. The more you’re willing to accept the risk of making a dumb picture, an empty picture, the closer you get to seeing just how expansive the medium of photography really is.

European Trip: Photographs from the Car is on view at Howard Greenberg Gallery in New York from April 18 – May 31, 2014

Eugene Reznik is a Brooklyn-based writer and photographer. He contributes at American Photo, Time LightBox, Animal New York and elsewhere. Follow him on Twitter @eugene_reznik.