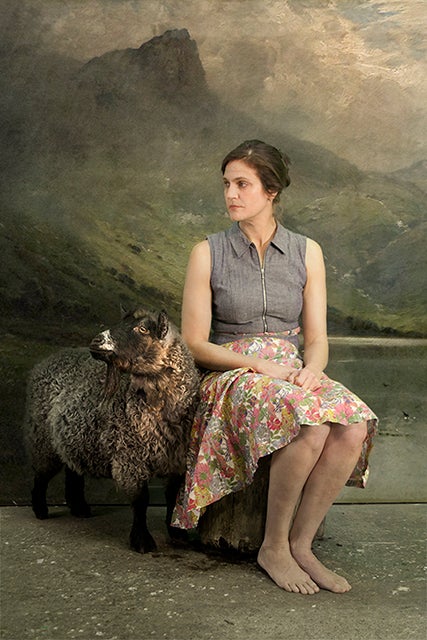 Oliver Wasow has been working with constructed photographic images for over 20 years in both analog and digital mediums. His manipulated landscape photography has been shown in the Metropolitan Museum in New York and the National Gallery in Washington D.C. in addition to a number of national and international galleries. A prolific image collector and compositor, Wasow recently shifted the focus of his work, from a long-standing interest in landscape and urban tableaux, to quiet and affecting portraits. To find out more, we caught with Wasow and discussed his most recent series, Portraits.

When did you get the idea for your Portrait series and how did it come about?

I had gone 30 years without ever photographing a person, my work had been mostly interested in (as most fine art photographers are) issues of fiction and artifice, exploring constructed images in a pre-digital time and way. I had never really had any interest in photographing people because I had just thought of them as being too historically specific…and a kind of documentary photography that I wasn’t interested in. At the same time I had a parallel practice where I was collecting images and had a real interest in vernacular photos and from an aesthetic point of view was really interested in old studio photography—setups with backdrops like in carte de visites from the 19th and early 20th century.

At some point, I decided that photographing people was something that I wanted to do and because I [was] shooting these with a greenscreen, it allowed me to work with landscape images which I had been doing for many years. The project was born out of the desire to collapse those two things into each other. It was also born out of a realization that a lot of the rules that I had set for myself about not photographing people were completely contradictory to the rest of my practice.

Who are the people pictured? What is your relationship to them?

They are my family and friends, mostly because they’re available to me. My goal isn’t to reveal something about these people that is true to their personality necessarily, though that does end up happening anyway.

One of the photographs in particular that was a real catalyst for me in this series is of my brother. He has chronic schizophrenia and has always been a big figure in my life. While I would like someone to see that photograph and not need any background information about it, there’s no question that making that portrait it was a way for me to try to break down the emotional distance that I’ve always had in my work and to try to engage with something that had meaning for me directly and wasn’t filtered through postmodern irony or critical distance. I’m torn—there’s a real attempt at sincerity and genuine emotion in this work and at the same time I have a distrust of that.

There’s three photographs of my wife in the series. She boxes, and in one of them she looks old and haggard, and it’s not a terribly flattering picture of her. In a way it’s fictitious, yet it’s not. There are other images of her in my work that are more romantic and idealized. I’ve never believed that a photograph has the ability to capture the essence of a person, but it can certainly capture multiple aspects of individuals.

How do you make the images? What is the process from start to finish?

My subjects are shot against a greenscreen and the backgrounds that I drop in are composites made from multiple landscapes, usually from paintings. In many of the pictures, you can actually see the line of the wall against the floor, a reference to carte de visite and old studio photography. After the background is dropped in, I work to create a play between the background and foreground. I want a certain degree of seamlessness in terms of the overall hue/saturation and the brightness of the image. Sometimes there may be a light coming from the background or it may look like something in the landscape is in fact, also projecting light out into the studio but I also want them to be separate. For me, the fact that I’m using paintings in the background is very relevant because I consider the images in this series to be as much paintings as they are photographs.

What’s the relationship between the sitters and the backgrounds that you’ve put behind them?

It depends on the shot. There’s a picture of a boy with a donkey, the boy is my son and the donkey belongs to me. The scene behind my son is from his favorite video that he was playing at the time. While that’s probably not apparent to most viewers, for me it was relevant.

There’s a picture where Dana my wife is wearing boxing gear and in the backdrop behind her are jagged and violent-looking mountains. There’s also picture of a friend of mine who’s a writer who is Lebanese, and he is posed in a very Orientalist style. The image was shot in his apartment and the Odalisque pose was his idea. There’s definately a relationship to varying degrees, usually the background comes later.

How do your portraits relate to the other work you make?

I’ve always been interested in the tension between the sincere and the romantic and the cool, distanced, ironic and fictitious nature of photography. I think that there is a thread that runs through my earliest work to the present of an almost overstated spectacle of romance and beauty that is borderline kitsch. I’m interested in photographs that have a tenuous relationship with reality where they’re both believable and not believable. I think a lot of photographers enjoy exploring that space. Science fiction, in the past, was a place for me to explore that, particularly before Photoshop, when the believability of the photograph was still relevant. And now that that isn’t relevant, I’m less interested in the Science Fiction aspect than I am in the mysterious and romantic nature of something being both a painting and a photograph.

What is your interest in the imagery and technology of the past?

I’m curious about what happens when you collapse the present and the past together—a classic postmodern strategy. There’s a moment in early Pictorialist photography where painting and photography were very closely tied together. Before fine art photography decided that the way it was going to distinguish itself as a fine art was through the Decisive moment and the documentary status of the photograph, there was this period where it flirted a lot with painting, right when painting was flirting a lot with photography. What interests me about digital technology today is that it is re-introducing that collapsing of painting and photography in on each other again. Photography is becoming increasingly a post-production, painterly activity.

Wasow’s work is represented in New York City by Theodore:Art