Interview: Nick Oza On The Ground After Ferguson Decision 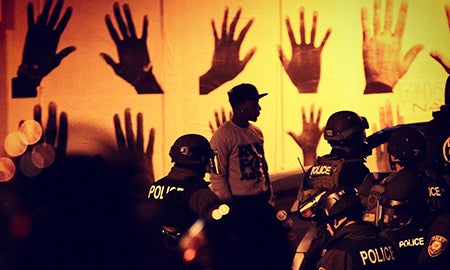 On Nov. 24, 2014 just after 8 pm Central Time, St. Louis County prosecuting attorney Robert McCulloch announced the grand jury decision that no charges would be brought against Darren Wilson, the police officer who shot and killed Michael Brown, an unarmed black teenager, on the street in Ferguson, Mo. Major protests broke out in the immediate aftermath across the country, with pockets of looting and arson in Ferguson, where police in riot gear deployed tear gas, and the FAA issued a temporary no-fly zone. Nick Oza, a staff photographer at the Arizona Republic, was on the ground on assignment for USA Today, filing photos and Instagramming for the duration of the night. We spoke to him the following morning about his experience of the evening, how he prepares to cover an event like this, and how he balances the visual allure of fire and smoke without descending into sensationalism.

When did you first get to Ferguson and what did you see?

I arrived in Ferguson on Sunday afternoon. There was a protest that I went to cover. You could see the tension in the community. People were waiting for the grand jury and organizing. I had not covered such a large situation before, I hadn’t been there in August, so it was a very intense experience. After the decision, rioters pretty much controlled the streets as far as looting or burning things.

What brought you over from Arizona?

My editor called me and said USA Today is looking for somebody to cover Ferguson. One of our staff photographers had been there for a week—there were so many photographers here and they were waiting and nothing happened. So he left on Monday and I took over.

Can you describe what the scene was like immediately after the announcement that Officer Wilson would not be indicted?

I think the intensity was building and I talked to somebody earlier around 3:30 p.m.—I had been photographing for a while that day—and I asked what was going to happen. They had been organizing. They said, well, if that happens, this place is going to burn. And I knew they were right.

But, right after the decision, the mother [of Michael Brown] came up on a stage, and there were so many people and everyone went quiet. It was really amazing. And after a few minutes—I think the mother was crying—one of her family or friends carried her off stage and that said a lot of things because then you see it photographed, you can feel the energy. That’s what I felt.

Within 10 minutes, things just started changing. It looked like they were pretty well organized. I saw the tear gas they started firing after a few pictures, and it just went bizarre. There was the fire—probably dozens, maybe more. I was trying to get my gas mask out and everything was foggy and also I was afraid of falling because I wasn’t able to see. So I didn’t have the gas mask on and I thought, well, I’ll deal with it later, I just want to make pictures.

For sure I came too close and [the gas] got me. And it got every other photographer too. For me it was a first experience, it was a little different. But, I was so fortunate, there were two black women in a car and they opened the door and I explained to them what happened and they let me sit in their car and gave me water and a ride actually because I was a little lost. So it took probably 10, 15 minutes to regroup my mind, and then I was functional again.

Was the police response intense at the onset, or was it in response to some rioting?

I think the protesters, they—basically police were assigned to corner them from both sides and I think the intensity grew. Maybe they anticipated the magnitude of it because in August it was bad, but not like this.

You mentioned a gas mask. How else, as a photographer, do you prepare to cover something like this?

You can prepare as much as you want, but at the same time I think you have to go with your gut feelings. There was one thing in my mind—if you’re by yourself, I think one or two photographers were robbed. Their camera got stolen, maybe also a laptop. They were shooting alone. So, I think you have to have a peer with you, and light equipment to work on an event with this kind of intensity.

You’re working very hard and one thing I realized there—I was shooting and I was sending pictures, instead of shooting more pictures. Some of the wire service photographers said they were transmitting wirelessly [right from their cameras] and I think every institution should be doing that. Because it is too — you can’t predict, but you can tell that things can go so bad and so quick.

You were Instagramming from the scene as well?

I did heavy coverage on Instagram, and I’m trying to use social media for sharing pictures live because that’s what the new generation of photographers are dealing with and that’s how our society is communicating. So I think our role is very different than before, as photographers or photojournalists.

Who were your colleagues on the ground you worked with to stay safe?

A very good dear friend of mine, Joshua Lott and Eric Thayer. I think Eric really helped me later in the day—I worked until, I think 3:30 [a.m.] and then I was editing so I went to bed after 6 a.m..

The temptation to photograph all the fire and smoke must be great, because it is incredibly powerful visually. How do you balance that without delving into sensationalism?

That’s a very good point. You have to be your own visionary. I don’t like to follow much on anybody. You can read all the books and understand all the compositional rules, but the rest, everything should come from your heart. And that’s why I use the term “intensity,” when I saw the mother [of Michael Brown] was taken on somebody’s back—I think for me, that picture says a lot. I think most of the time, when you’re a veteran photographer you see hugs a lot, but this was something very different. So I tried to look for things that are not just unique, but that tell the story better, and what is your own vision. Not many viewers can come here, so the question is how can you show them what it is.

How do you anticipate this playing out in the next few days? What are your plans and what will you be looking for?

I’ll be out shooting today to see what the aftermath is of all this. I do a lot of long term projects—I work on immigration—and I try to do it on my own time because the magic never happens when you want it. I really hope I can tell the angle of what the community is going through, because not everybody wants this. Sure, there is justice and injustice. But, I think everybody was suffering. The intensity is there, so it may go on like this, but I hope they control the situation so that there aren’t more victims after all this.