Gregory Crewdson is best known for his elaborate and surreal imagery of small town America. His photos almost always depict... 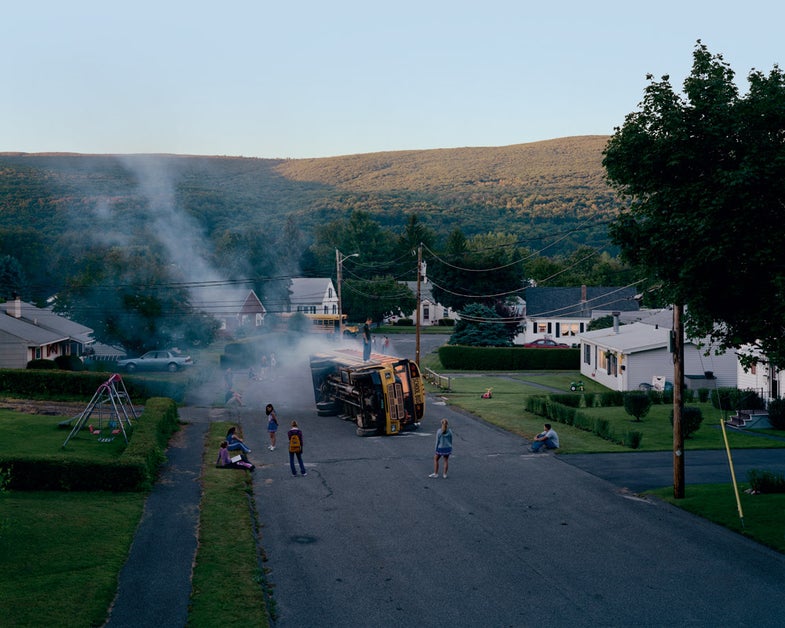 Gregory Crewdson is best known for his elaborate and surreal imagery of small town America. His photos almost always depict peculiar, and at times downright disturbing scenes of horror, chaos and mystery. We recently chatted with Mr. Crewdson, to dig a bit deeper in the sub-conscious of a most-intriguing photographer.

How did you come to photography? Crewdson: My interest was piqued early on, when my father bought me to the Diane Arbus retrospective. I was ten years old at the time, and it gave me an inkling of the power of pictures. But I didn’t start taking pictures until I was in college. I had a crush on a girl who was photo major, and followed her into a photography class. My Photo 1 teacher was Laurie Simmons, and my crush went from the girl to my teacher. As soon as I took my first pictures, my crush shifted from the teacher to photography.

What was it about the photography that made you fall in love with it? The stillness. Photos are fundamentally different from movies or literature, and this frozen aspect is particularly compatible with the way I think. I have dyslexia and still images make more sense to me – I think in terms of still images, and I know how to read them.

Ironic, considering that “filmic” is often used in connection with your work.
I always loved movies and the look of movies. I’m also a huge student of movies – but could never make one. Working in a linear fashion is foreign to me. I was always interested in using aspects of film production towards a single image – the relationship between movie making and still photography – and blurring the lines between the two. I’m fascinated with telling a story in a single image rather than through time.

If you had to pick one movie that has shaped your work, which one would it be? David Lynch’s Blue Velvet, without question. That would be the movie that defined me as I was coming of age. I encountered it when I was a graduate student at Yale. I remember feeling deeply connected to how it used the American vernacular, and revealed something more dark and sinister underneath it. I was also completely connected to the way it looked: the use of light and darkness. I’m not saying it’s the best movie ever made, but the one that defined me the most.

Cinematographically, your images also evoke the work of two earlier directors: I’m thinking of the interior shots of Yasujiro Ozu, or that famous scene in Orson Welles’s Citizen Kane – when Mr. Thatcher signs the contract with Charles Foster Kane’s parents in Colorado, and young Charlie Kane is seen through the window, playing in the snow with Rosebud…
Absolutely, both Ozu and Welles are important influences. Take Welles’s use of deep space, this great depth of field where the story has several layers, and everything means something.

You’ve once said that “every photographer has one story to tell” – with the emphasis on the word “one.” What’s your one story? If I knew exactly what the story was I wouldn’t need to make pictures. In my own head, the story is undefined and murky, impenetrable. My whole need to make pictures comes out of the urge to understand what that story is.

But there are themes running through your work…
I’ve always been interested in the commonplace, in finding a sense of beauty and mystery in everyday life. I’ve always been interested in the psychological nature of picture, in trying to explain my own fear and anxiety and desire in photographs. The pictures are my means of trying to find meaning in the world.

What are your fears and desires? A theme that runs through the work is trying to make a connection. All photographers feel alone in a sense: taking a picture is an act of alienation, of separating yourself from the world. The feeling of being alone and wanting to connect is a theme in my photography and in my mind.

Spoken like the child of a psychoanalyst… There’s no doubt that my father being an analyst has shaped my view of the world. He didn’t act like a psychiatrist with us, but he was very present for us, particularly since his office was in the basement of our house. We witnessed on a daily level what he did; saw the patients coming in and out. When there was a family issue or one of us had a problem we would go to his office to talk about it. Not as a therapy session, but as a safe place – inside the house, but also separate in a sense. All that did have an influence on me and I brought some of that my relationship with my own children.

Do you also bring some of that to your work? Psychiatrists have a kind of distance from the world, but at the same time they also have a kind of empathy. What I adopted from him was that combination of distance and intimacy. My pictures portray intimate moments, but at a remove.

You speak of photography as a means of self-exploration. Roger Ballen describes his motivation in similar terms. But the resulting images are quite different. Ballen’s work evokes a sense of close quarters. Your images are often noted for their expansiveness. Yes and no. There’s expansiveness, but also claustrophobia, in my images. People being caught in doorways and the like. I’m fascinated by the figures and the setting – people looking for a way out, a possibility of something larger, something outside their own existence. I would argue that a theme in all my work is entrapment and expansiveness at the same time – because that’s a theme that runs through my mind.

Your images require production like a movie, and often cost as much to create. But you haven’t even mentioned the technical aspect yet… It’s almost ironic that my pictures are so technical, because I’m not so good at that stuff. I have an idea in my mind and figure out how to do it one way or another. Photographers have to be problem-solvers on a very practical level. Photography is so dependent on the world; you cannot disregard the practicalities.

“Perfectionist” is another term often bandied about in discussions of your work. It’s undeniable that I have control issues, that I want to do everything I can to make a perfect image. But at the same time I know that perfection is impossible to achieve. Much of the tension and the mystery of photography to me lies in my desire to create this perfect world in a still image – and the impossibility of doing so. That’s what keeps me making pictures.

Doesn’t that mean that frustration is pre-programmed? Frustration is key to making art in general. To make art is to will something into life, but there’s always something that goes against you. Be it technical issues with the camera, or weather problems. You can’t count the ways that a picture can go wrong. Frustration and resolution are key to my process of taking pictures.

Most of your images include human subjects, but they are presented in a detached manner. How do you relate with your subjects – during a shoot and conceptually?
We get them through a casting process. They’re always given a description of the picture before we start shooting, but I want almost no contact with them outside the making of picture. I don’t ever want to know my subjects well. I want them to feel foreign to me in a way, because I want that feeling of separation to be evident in the picture: a private moment, but photographed in a detached way.

That sounds remarkably like an analyst describing his relationship with patients… Absolutely! What fascinates me is that tension between the detached form of the therapy session and the private things that are said in it.