The last time we spoke it was in a very different context: in 2001 and 2004, when your pioneering Internet... 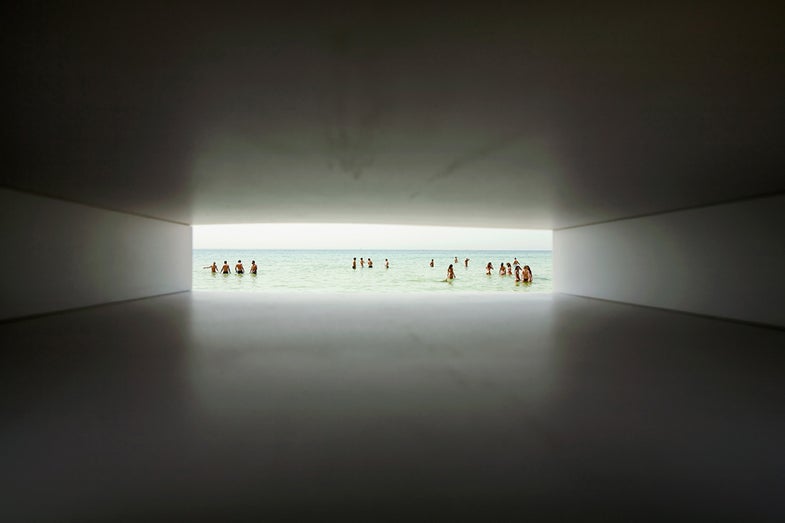 The last time we spoke it was in a very different context: in 2001 and 2004, when your pioneering Internet telephony firm Vocaltec was in a partnership with Deutsche Telekom. Now, we are meeting you again as a photographic artist. What happened in the intervening years?
Ganor: I retired from my role at VocalTec in 2005. Of course this decision didn’t come out of the blue: I always had a strong affinity for photography – I got my first camera at my bar mitzvah and have taken pictures ever since. Originally my plan had been to retire from business at 50 and become a filmmaker. But when I attended a workshop by Adi Nes, I realized the full potential of still photography and decided to enter a full-time program at the Hamidrasha School of Art in Tel Aviv.

But in terms of subject matter, you didn’t leave the world of business and finance entirely…
Correct. My first project was a Photo series called Wall Street, which I shot in New York City and Israel over the course of three years while I was a student at Hamidrasha. It consists of seven staged photographs that represent my view of Wall Street after having being the CEO of a NASDAQ-traded company for more than a decade.

… and it’s not a rosy view.
That’s putting it mildly. During my years as a CEO, I encountered so much immoral, corrupt behavior by investment bankers that I developed a disdain for Wall Street culture. They cared about only one thing: making money – at any cost. I experienced this first-hand: in 1995, VocalTec was approached by Netscape, who wanted to acquire us. I declined the offer and we decided to go public,. The lead bank was Hambrecht & Quist. Three days before our IPO, Netscape announced the acquisition of a direct competitor of ours. The investment bank? You guessed it: also Hambrecht & Quist! As a result of the acquisition announcement, our IPO was marred, and our shares dropped from $19.00 to 16.75. ( It did recover later)

So Wall Street was an indictment?
Art became my way of expressing my sentiments about Wall Street. I have a medical background, and my training included psychology. The book “Snakes in Suits : When Psychopaths Go To Work” By Paul Babiak confirmed my own analysis: it claims that the investment banking industry, in effect, recruits psychopaths– people who will do everything they can, amorally, to earn money. This book confirmed what I knew. Of course I know a lot of great human beings who work in investment banking, but they are in the minority. I became convinced that when so many sociopaths congregate in one industry, something is bound to go very wrong. The work was my way of warning of things to come.

What were the reactions?
My Wall Street series premiered at a Tel Aviv gallery on 21 August, 2008. Three weeks later, Lehman Brothers collapsed. At the time, the work was described as prophetic. I got dozens and dozens of calls after the Lehman crash, all asking: How did you know? The answer was simple: I experienced the problem firsthand.

Your new series, The Box, marks a departure from Wall Street – both in terms of form and content. How did it come about?
I’m the type of photographer who always carries his camera with him. One day, I found myself in a new seaside restaurant in northern Tel Aviv. It had a cupboard that was open on both sides. Like many photographers, I’m a peeper – who shoots things just to see what they look like through the lens. When I saw that cupboard, I couldn’t resist the temptation of finding out what the beach would look like framed by the shelves.

I was so intrigued by the results that I kept coming back to the same restaurant, simply to shoot through their cupboard. Carrying a cupboard isn’t very convenient, so I asked a carpenter to build me a set of wooden boxes in different shapes, colors and sizes. I would carry them with me to see how the results would be.

What does the box mean?
Once I found myself walking around with boxes, and people on the beach saw this strange man shooting through a box, I had to do some thinking about what got me hooked on the box (laughs). Art photography has many definitions – the one that speaks the most to me is that the photographer is a sculptor whose main material is light. In that context, The Box is a study of rays of light, a study in physics. When you shoot from different positions with the box, or at different times of day, you get light from different angles, and you get dramatically different images. With the wooden box you help shape what you see.

A means to amplify differences in the quality and shapes of light?
Yes, and it also serves to emphasize specific elements, and hide others. It’s a very primitive wooden lens that yields interesting results when combined with an highly technological tool such as an advanced camera.

When you look at the outcome, 80% of the image are the sides of the box – what would classically be considered the subject is only 20% of the image, essentially, a slit. But to me, the real subject is both the light on the box and the slit – the two add to each other. It’s a physical game of perspective. You know how photographers and kids will sometimes frame a subject with their fingers? That’s what the box is about – except that boxes come in a much larger range of sizes than fingers, so there is no natural reference point. This throws the viewer off and creates an enigma. For example, many people think it’s a specific location that I’m peeping through. But in fact, my peephole travels with me.

Where to?
So far: all over Israel, both on the Mediterranean and the Dead Sea, and internationally to Spain, Cuba, the USA and others. It helps me in my quest to create something sublime in its beauty. Of course you never get there, but you reach for it – and the beauty that comes out of the box is often quite poetic.