Interview: Alex Prager’s Nod to the Golden Era of Film

"I certainly don’t have the classical school background. " 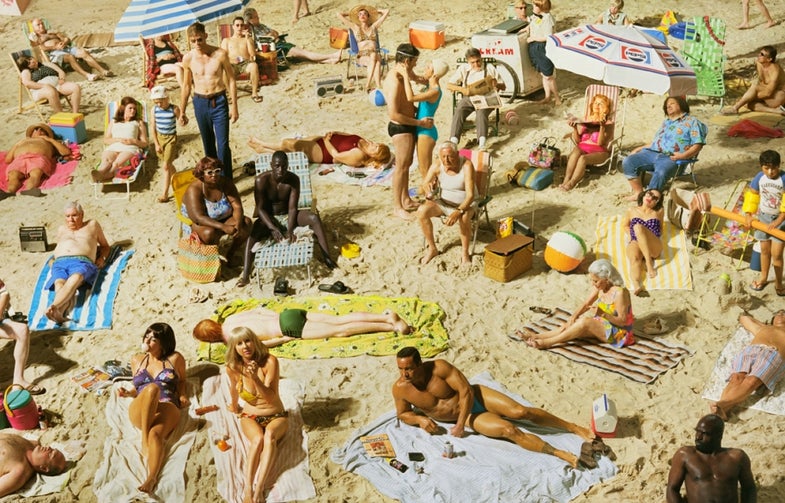 You’ve had an unusual beginning in photography; one could even say you stumbled into it. How did you discover photography for yourself?
I certainly don’t have the classical school background. I was 20 when I realized that if I didn’t choose something to channel my energy and passion into, I’d be doing office jobs every day of my life. I was working as a receptionist at the time. So I started going to museums and art shows, and wanted to see if I could draw or paint. When I was 21, I came across the Eggleston exhibit at the Getty Museum. Within one week, I bought a used Nikon N90-S and equipment on EBay – from a lady who was divorcing her husband and getting rid of his stuff. It cost $80 and came with a manual on how to use darkroom equipment.

There’s a long way between a first camera and a career in art photography.
I was really excited about the pictures I was taking. Now, I’m mortified at them. I was developing pictures at night in the darkroom until 3 or 4 a.m. Above all, I felt like a picture wasn’t totally done until I had an audience to react to it. I still feel that way

How did they react, and who we’re “they”?
At the time, I was living in an apartment building in Korea Town. I used to hang up pictures in the laundry room and in the morning I would see which pictures were gone. That way, I could see what people liked.

When I started showing in galleries, people would come up to me and tell me what they were feeling about the work. People were telling me that the subjects reminded them of people they knew, that images were reminding them of scenes from movies. I was trying to give people something that felt vaguely familiar to them?

Why?
It’s the same way I use color to get people’s attention, and then to have them discover something underneath that’s not as cheery.

Your images are often described as having a filmic quality
I try to create a slight exaggeration of real life – something that is more intense and dramatic. A heightened representation of real life, like a parallel universe. Much of the filmic feel in a still photo comes from the lighting: Your lighting is really cinematic, so is Gregory Crewdson’s and so is mine. Your work reminds me of the movie Wings of Desire: it has that glow to it, but in dilapidated old scenes, and the subjects look like angels.

Which kind of movies inspire your lighting?
I love the lighting from Hollywood movies of the Golden Era, from the movies of the 1920s until the 50s. With that kind of lighting, anything can happen. It draws you in. There can be a lot of dark things happening – things that might not have been pleasant to watch, but the lighting aestheticizes them and makes watching the movie irresistible.

Orson Welles once said: “”I passionately hate the idea of being with it; I think an artist has always to be out of step with his time.””
I want to communicate to the culture that I’m part of and live in. I want to be half a step ahead, but never out of step. It’s important to me to connect with people who are around me. I don’t want to die and 150 years later people go: “Alex Prager… now I get it!”

…Recognition in your own lifetime?
Not really. It’s more about having a place to connect. Because maybe then you can change some ideas about culture a tiny bit, or to inspire people to do things that they wouldn’t’ have done before.

What kind of ideas?
For one, “what is beauty?” It’s not so much about answering the question as about asking it –and showing a variety of answers. I find it really beautiful to have a colorful crowd with interesting faces, with unique noses, ears and fingers. Some people might find a six foot tall Brazilian model with a perfect ass beautiful. But when something is perfect, you look away because you feel you’ve seen it before. I’m more interested in things that are off, unique and strange.

Another idea I’m interested in is the role of a female is in our culture. When I first started to have the female as heroine it was more because I’m a woman and I knew it better. But when people reacted to me being a woman shooting women, in my first series Polyester and The Valley, I became aware of women in our culture as a theme.

Your recent work focuses on crowds.
Crowds fascinate me. Above all, what they see or don’t see about their lives – what they connect with, or don’t connect with. The crowds in my images include a range of people: My sister, who is also my best friend, is in all my pictures; but there are also strangers I found on the street and people I find through casting companies. The pictures were created in a staged setting, but after a while, things became real. People start acting differently once they enter the crowd – because they’re people after all, and they connect or not. That’s when unexpected things start to happen.

You almost sound like a biologist looking through a microscope
I am detached in that I use people whom I don’t know as props. But there are also people I know, my sister and very good friends. That’s very important. I’m not trying to reenact crowd scenes, but I’m trying to show the separation and disconnect between people. I’m very aware of the energy that surrounds my sister and me when we’re shooting, and that energy influences the reactions of others. Insofar as there’s an experiment going on, we’re all part of it.

What are you working on now?
It’s a secret. I feel when you have an idea and you tell someone before you’ve made it, you release some of the energy you have in it. You get a reaction, maybe even an acknowledgment. It lets the air out of the balloon a bit.

So, as much as you like the reactions to the images, you actively avoid reactions at the concept stage?
Yes. Because, in my view, I haven’t made anything yet. The concept, after all, is not a thing, but just an idea about a thing. And as a visual artist, the only thing that really counts for me is an image that I can show people.