The photographer’s latest monograph is a lyrical blend of humor, alienation, and nostalgia 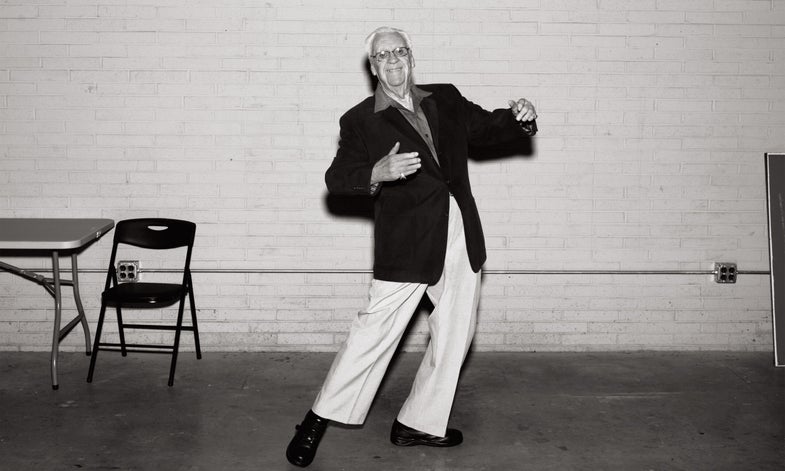 For his latest photobook, Alec Soth has reedited his work made over the last few years on assignments for news magazines, and through his collaborations with the writer Brad Zellar for their self-published itinerant “small-town” newspaper, The LBM Dispatch. Re-sequenced, and stripped of their original context and captions, the images in Songbook (MACK January 2015) take on new meaning and offer a rambling, witty, and wistful examination of contemporary American culture, of the individual’s role within the community, from coast to coast. The work will be exhibited in New York at Sean Kelly Gallery from Jan. 29, 2015, and in San Francisco at Fraenkel Gallery from Feb. 5, 2015. The following is an edited transcript of our conversation with Soth about his push away from verbal language, the parallels between music and photography, and how together they invoke a uniquely American blend of anxiety and nostalgia.

So much of your work from the last few years is closely tied to text, words about the pictures—your editorial assignments, your collaborations with Brad Zellar, the Ping Pong Conversations. For this book, you’ve stripped away from many of those same pictures their original context and their accompanying text. What was your intent behind pushing away from verbal language?

My whole career in photography has been this sort of battle with text, and with story, and narrative. There’s been the longing for narrative, and at the same time the knowledge that photography often resists it, and functions best when narrative is imagined. If you look in the back of Sleeping by the Mississippi, you’ll find these footnotes to the pictures, and then in Niagara, more extended footnotes. And then going forward, my last project book, Broken Manual, was followed up on by filmmakers and they kind of took care of the backstory in ways that sort of relieved me of that obligation that I had to the story. In a similar way, having collaborated with Brad over the last few years, I know those stories exist, and I know that they’re documented, and have a place, and will have another life in the future as well. He had great respect for the pictures and wouldn’t over-tell the story necessarily. But even still, there’s something refreshing to me about letting them just exist purely, or almost purely, as images. The Songbook, it sort of liberated me of that, and the pictures can just exist on their own.

Do you think your same pictures function differently when you take away the words? Would you say perhaps that these documentary-style images take on a more fictional perspective or function?

Yeah, totally. And even in this case, there are titles, albeit pretty abbreviated titles in the back of the book, but for the most part they exist without text, unlike my other books where the title is right there on the facing page. Stripped of that, I think they allow the viewer to greatly imagine the story. I think there’s always some degree of that, no matter what. You know, if it’s a picture of Barack Obama, or something, the most famous celebrity, projection is involved, but there’s sort of degrees of it. And having accompanying text shapes the projection one way, and the more information you remove, the sort of more wide open it is for the viewer. I love that experience, that feeling of having it be wide open.

Your past collaborations with writers I interpret as a kind of transmedia storytelling that compensated for each medium’s shortfalls. In this book I see you’ve swapped words for music, in a similar vein. I’m curious about what got you thinking about music, what you think the parallels are between photography and music, what each can do to complement the other, and how you think they work in tandem?

I’ve just found myself over the years using music as a metaphor all the time. It’s not that I think photography functions exactly like music at all, but I think that’s sort of like one end of the spectrum, with something like journalism, being on the other. I’ve often said that I think photography functions a lot like poetry, but it annoys me, because poetry kind of annoys me. But at the same time it’s just the reality that there’s a lyrical quality to everything that’s—talking about everything being open to interpretation is this kind of lyrical experience. And so with this book, having done the Dispatches with Brad—that word, “dispatch” being symbolic of news and journalism—I thought of this other way of putting pictures together which is more lyrical and more musical, and less narrative. How do I choose what goes in the beginning and the end of the book? It’s not really geographical, it’s more about this feeling that I equate to what I imagine to be how composers work, though I’m by no mean’s musical in any way.

Perhaps I’m stretching this metaphor, but in my experience of the book, I found a kind of melodic quality to the sequence. There are these patterns and visual refrains that I, as a photo editor, wouldn’t necessarily out of instinct think to maintain, but are nonetheless successful. Your repetition of certain types of compositions in immediate succession to me functions as a kind of chorus. Was that something you had considered?

Exactly. I’ve been thinking a lot about music as I’ve been collaborating with other photographers at Magnum on stuff, and collaborating with Brad. This act of collaboration, I’ll often make the analogy to functioning in a band. Though again, I never was in a band or anything like that. Over and over again, these musical analogies come up and it felt appropriate with this book. Recently I collaborated with the musician Billy Bragg on something, and just thought about this overlap about how these mediums work. I wanted to inject that into the pictures some way.

You mention collaboration—you did this book outside of your own publishing company with a larger, somewhat more commercial art publisher. What was the process of collaboration like putting it together through that kind of venue?

That’s a good point, it was really important for me not to self-publish this project. Which is not to say that self-publishing is not collaborative, it very much is, and I work with designers just like with MACK. But I felt strongly that all of my major projects not be self-published. Self-publishing for me is about experimentation. In this case, this is less of an experiment than a finished project, and I want professional distribution, and all that stuff, and there’s a real element of collaboration in that. Which is a little bit different actually than in the past, with Steidl, which gave me a ton of freedom. With Michael Mack, you have a great deal of freedom, but he was an incredible collaborator in terms of design, and thinking about how this object will live in the world. That was just a really great experience. Again, thinking about the musical analogy, Little Brown Mushroom is like, I’m putting out these little cassettes into the world, and here’s like an album, a crafted, studio album, which I worked on with a producer, and I’m really proud of it. But at the same time, it’s not like a tremendous amount of people. Michael is a small operation and particular in the way he does things, and it’s fantastic.

Do you still put together book dummies, by hand?

That a little bit has changed actually. This is the first time that I had not done a truly hand-made dummy. Why is that? I don’t know. I mean, I guess I’m far enough along in my design chops, which are severely limited, that I can open up InDesign, and play around with it. So in this case, not a physical dummy. But I’ve been so involved with Dispatches, and everything that came before that I do have a better sense of how to do it.

One thing that I’ve learned, which is especially true about Little Brown Mushroom, is how much I don’t understand design. I know what I like but I just don’t see it. The way I explain this to students and photographers—we understand when there’s shadows missing and details, but like, kerning—we just see it, we don’t understand how it works. So I came to MACK with a layout, in a sense, and then he responds, the designers respond, and they they scoff at certain things, and admire other things. The exceptional quality of the thing, the basic feeling, I kind of get it, but I can’t technically do the stuff.

Tell me about the bits of lyrics and quotes you dropped throughout the book.

I would say that halfway through the process of working on the Dispatches and whatnot, I started developing this concept. And I knew that the pictures, they’re made in the world as it is, but there’s this definite element of nostalgia. And at some point, these two words became prominent in my mind: nostalgia and anxiety. And in terms of the lyrics, I thought about that quality, the way that sort of old music can invoke both of those feelings simultaneously. Ironically, I wanted the lyrics to kind of provide this soundtrack for the pictures.

Working in black-and-white tends to convey both those feelings, too. For the exhibition of this work, did you ever consider doing a kind of immersive installation, where you would add some kind of soundtrack or audio element to the experience of your images?

Interesting you say that because I’m really sort of adamant that this not happen. And this came up in the collaboration with Billy Bragg—I tend to think that photographs and music actually don’t work well together. It becomes sort of syrupy when you do it. I was really adamant that it not turn into this sort of slideshow with music playing, because it forces the emotional content. Part of the power of photography is the absence of sound, absence of time, and so forth. So, it’s the idea of music, rather than music itself that works for me.

There’s a lot of wit and humor in your images in this book. But there’s also a fairly consistent and deep sense of melancholia. Can you talk about about these two moods? Are we depressed as a society? Or is it that you find our society depressing? What do you think it says about this contemporary era in American life?

I have a hard time drawing a line between what is my own psychology and my own interests, things that I’m attracted to, and what’s in the culture at large. I mean, I know for sure that a lot of what makes the pictures look the way they do is just me. But at the same time, I have an awareness that American culture is—by virtue of the celebration of individualism, or whatnot, there is that element of loneliness and melancholia in the culture. But I’m uncomfortable making any sort of grand statements about the way the world is. I don’t think I photograph the way the world is exactly. It’s like what I always said about Niagara Falls. You go there and the first thing you see is lots of happy families enjoying things, and that’s not what I photographed. With this work, I tried to be a little more broad, and diverse in my approach to things, but at the same time, I’m attracted to what I’m attracted to.