"The debris was just unbelievable. It looked like two atomic bombs went through." 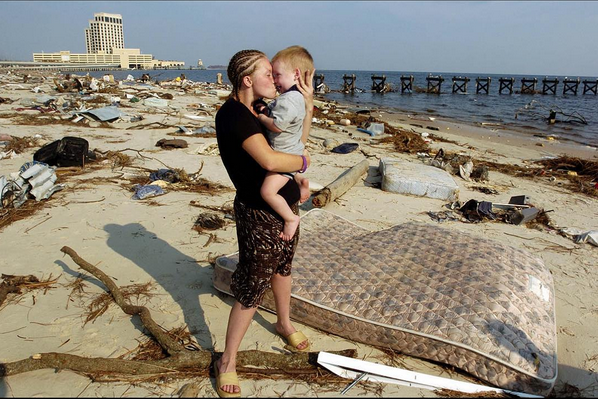 This week on Instagram award-winning photographer Nick Oza has been sharing images that he made a decade ago when Hurricane Katrina battered the Gulf Coast. Here, he recalls where he was shooting when the storm came and the stories that he and his colleagues were looking for once it had passed. Follow along on the @AmericanPhotoMag Instagram feed.

At that time I was with Knight Ridder Newspapers and I was working for Macon Telegraph in Macon, Georgia. The whole time I was shooting in Biloxi. We were trying to help our sister paper, the Sun Herald. We were following the storm and Biloxi was supposed to be the hardest hit area. Biloxi had more damage, but New Orleans became the story because the levee broke.

I was there for a week. I left on August 29, I think it was a Sunday. We were right behind the storm and we were the very first ones who got there from my paper. The debris was just unbelievable. It looked like two atomic bombs went through. Stories were everywhere.

Upon arrival in Biloxi I met up with Mark Washburn from the Charlotte Observer—six months earlier we had worked together covering the war in Iraq, as soon as he saw me he wanted to have me do portraits of people.

Honestly, when Mark chose me and said we’re going to go out and shoot portraits I was a little ticked off. I really wanted to go to New Orleans, but I think 10 years later, the story needed to be told in Biloxi too. We ended up hitting these very big heartbreaking news stories. There was a high school where a lot of people were staying and there was a fear of a diphtheria outbreak. We were the first ones who broke that story. It was about following small things and finding bigger stories. A lot of people just felt lucky to be alive.

I think covering Katrina was ground breaking for me, not just as a photographer, but as a human being. It showed me that I wanted to focus on issues that really matter. For me, understanding humanity comes first.