Inside The Whitney’s Inaugural Show, ‘America Is Hard To See’

The reinvention of everything 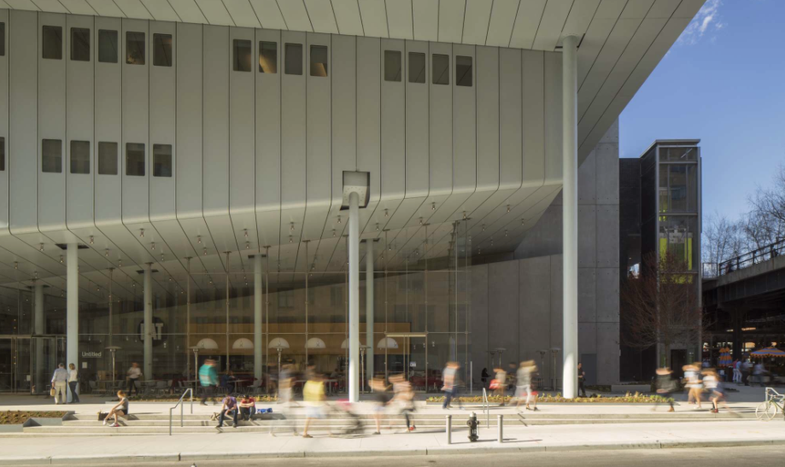 To date the conversation surrounding the opening of the new Whitney Museum has focused mostly on its exterior. The Renzo Piano-designed fortress of glimmering glass and steel on the cusp of the Hudson River is an impressive addition to New York City’s Meatpacking district, but the true value of the new Whitney is what the space will make possible for the artwork in the museum’s permanent collection. When the museum opens to the public on May 1 that is likely where the conversation will shift.

The inaugural exhibition, “America Is Hard to See,” is a staggering assembly of work that showcases the museum’s beloved and newly acquired treasures, and reasserts the institutions’ commitment to modern art of American origin. Meticulously divided across eight floors and 220,000 square feet, the exhibition is finely tuned and fully integrated, with photographs, paintings, drawings, sculptures, installations, and video pieces sharing multiple, themed galleries, and the effect is riveting. In a world of image-fatigue, the exhibition makes familiar work look brand new and radically relevant.

“We knew from the start that this would be an integrated exhibition, as that’s always been the Whitney’s mission,” said Elisabeth Sussman, the Sondra Gilman Curator of Photography. “Our core curatorial team established 23 chapters for the show, and we brought relevant things from the photography collection into those themes.”

Sussman, along with Senior Curatorial Assistant Elisabeth Sherman, had a lot more to choose from when preparing this exhibition. In September, the Whitney received a donation from longtime trustees Sondra Gilman and Celso Gonzalez-Falla that Sussman said had a truly transformative effect not only on the collection as a whole, but on the outcome of the inaugural exhibition too. The donation includes work by Imogen Cunningham, Margaret Bourke-White, Alfred Stieglitz, Robert Frank, and the first Ansel Adams pieces ever acquired by the Whitney. Of the three new Adams photographs introduced to the permanent collection, only one is featured in the show. The presence of Adams’ 1941 print “Moonrise, Hernandez, New Mexico,” next to a series of eight Chiura Obata woodcuts and watercolors is so striking, even the most jaded observer will be compelled to stop and stare.

By placing photography alongside it’s aesthetic peers, “America is Hard To See” finds new dimensions in often-exhibited work, and invites further investigation of the less familiar. From Walker Evans to Weegee, Lee Friedlander to Lewis Hine, nothing feels overexposed or pushed aside. Even where massive sculptures and neon, pop-art prints threaten to draw your attention elsewhere, Larry Clark’s black and white prints from his Tulsa portfolio, which lead the exhibition chapter “Raw War,” are alluring, provocative, and unavoidable.

Beginning at the 8th floor of the new building, “American is Hard to See” follows a loose chronology that traces the Whitney’s own lineage. In following that history, a narrative begins to emerge, and as you descend the light-filled stairways or the Richard Artschwager-inspired elevators, the lines between media and medium and process and practice intertwine and overlap, bursting from the fifth floor galleries in what is arguably the show’s image-heavy apex.

“You could say the entire fifth floor is really about photography,” Sherman said. “The Whitney has committed to collecting the work of the 20th and 21st centuries, which are really the centuries of the camera. But the 1980s and 1990s represent the bulk of our collection, which is when artists really started to explore the image in new ways.”

The ‘newness’ of photography is evident everywhere in the exhibition, as it is repeatedly reexamined, dismantled, and reborn, each time emerging with an immediacy informed and inspired by the cultural, political, and technological conditions that surround it. Nan Goldin’s landmark slideshow The Ballad of Sexual Dependency is presented in its intended form, in a darkened room and accompanied by a carefully curated soundtrack. But the power of her intimate expose is reflected again in the Whitney’s new performance space, where Yuji Agematsu’s immersive installation “Walk on A, B, C” takes viewers on a slideshow-driven geographic journey around the museum’s new neighborhood. While the intent of these pieces are drastically different, both are punctuated by the visual intensity of color slide photography, and a sense of movement, tension, and transience.

With over 400 artists represented in the show, it would be easy for Diane Arbus or Dorothea Lange to fall through the cracks, but everything is anchored, and nothing is underestimated.

“America is Hard to See” presents photography parallel to everything else, not as an art form to be considered in isolation. Through carefully curated pairings, like Man Ray photograms coupled with Louis Lozowick pen and ink drawings, the Whitney makes a strong case for the power of thoughtful juxtapositions. The photographs featured aren’t out-of-context, but in complex conversations with aesthetic peers, taking on the deconstruction of everything and playing a crucial role in its reinvention.