Inside The Trophy Rooms Of Texas’s Biggest Big-Game Hunters 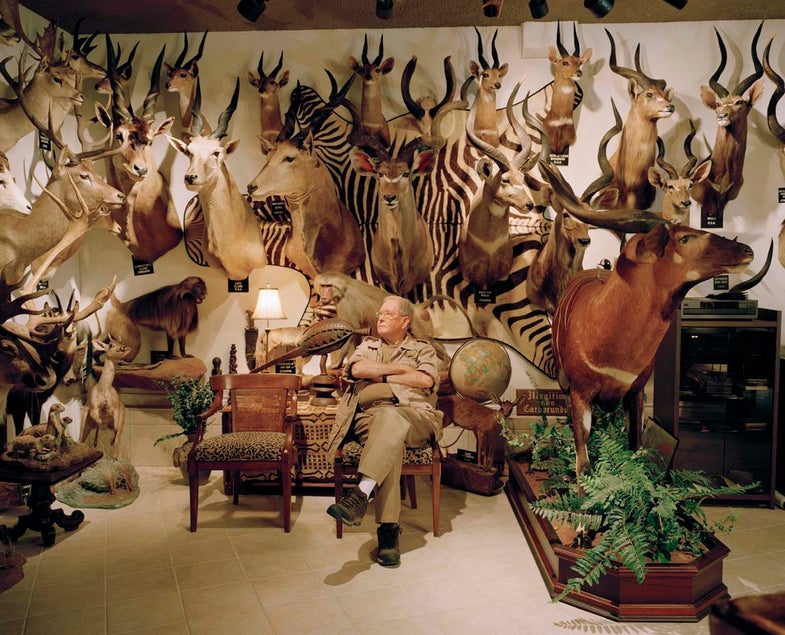 untitled hunter, trophy room # VII, dallas, texas For his 14 year quest and collection in fair chase of all the Spiral Horned Antelope of Africa and many sub species of which 17 of 19 are record class, and in addition a recipient of the Africa Big Game Award for the successful collection under fair chase conditions of the African Elephant, Buffalo, Lion and Leopard. David Chancellor
SHARE

If you’re not the hunting type, your first reaction to David Chancellor’s series “Safari Club,” in which he photographs the trophy rooms of big-game hunters, may be one of shock. It seems like it would be easy to get outraged over these images, or the people that they depict, but Chancellor’s coolly-written statement hints at a different approach. In this text, he lists out the requirements for various international hunting awards: “The Africa Big Game Award, for the successful collection under fair chase conditions of the African Elephant, Buffalo, Lion and Leopard.” If it seems like Chancellor is being intentionally vague about his own intentions for taking these photographs, that’s because he’s trying to make it difficult for you, the viewer, to draw simple conclusions from his work. A quick look at the trophy hunters in “Safari Club” does not shed much light on what Chancellor actually thinks about them. He says that he is motivated to study the things he doesn’t understand, in the hope of provoking his audience to reconsider their own beliefs. 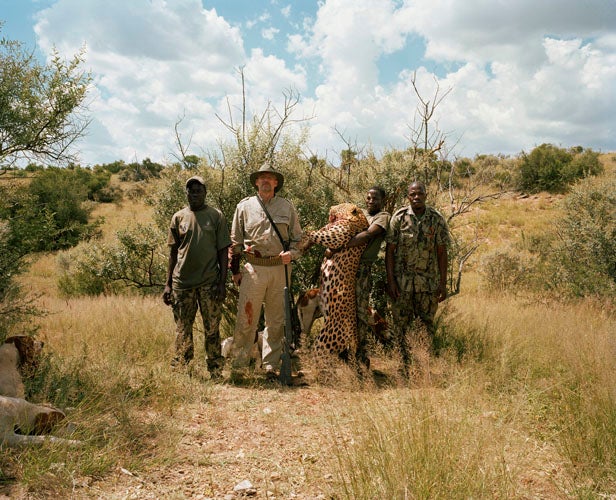 “Safari Club” is just one series within Chancellor’s broader work on what he calls “human-wildlife conflict.” While stressing that he is “not a wildlife photographer,” over the course of more than four years, Chancellor has looked at the way that wildlife is treated, using game hunting as a way in to make a broader point about the way that humans and animals are interacting. He’s extremely well-versed in this subject, and can explain freely the particular challenges that come up in working with different species in different environments. In our conversation, he described to me in detail the various ways to manage elephants: when humans enclose them in any kind of space—even a huge one—they will eventually eat all the vegetation, and starve. A recent set of underpasses built in Kenya have allowed elephants to move freely, without creating any conflict with humans. This issue, like the Texan hunters of “Safari Club,” is just one aspect of Chancellor’s larger work. I spoke with Chancellor ahead of the American release of his monograph Hunters, published this month in Europe by Schilt Publishing.

What was your motivation to photograph the hunters in Dallas?

I became very aware that I was photographing individuals who were usually shooting one or two animals, but to have gotten to that level, you will have gone through the rest of the animals. These hunters—particularly the Texans—were talking about how they had a space in their trophy room for this, this is something they’d always wanted to do, they were building an extension to their house in order to put this in. A picture with one animal might particularly appall one person, but put them in their sitting room—I think one guy has 242 animals in his sitting room—put them with their life’s work, and then you start to ask questions: Why? why would you want to do this? And how could you possibly argue that hunting and conservation go hand in hand when you have 242 detailed species? The way to get in to that world was slightly convoluted, but by the time I got to photograph those guys, I spoke the language. They’re incredibly private spaces. Those people sit in those spaces on a daily basis to enjoy the animals. They’re not dusty natural history museums, these are their sitting rooms. I wanted to look at different levels, including people who would take their private jet to West Texas to sit in their room, and people who would do as many jobs as they could, on a daily basis, to spend 5 or 6 days hunting. So there is a complete cross-section in there. 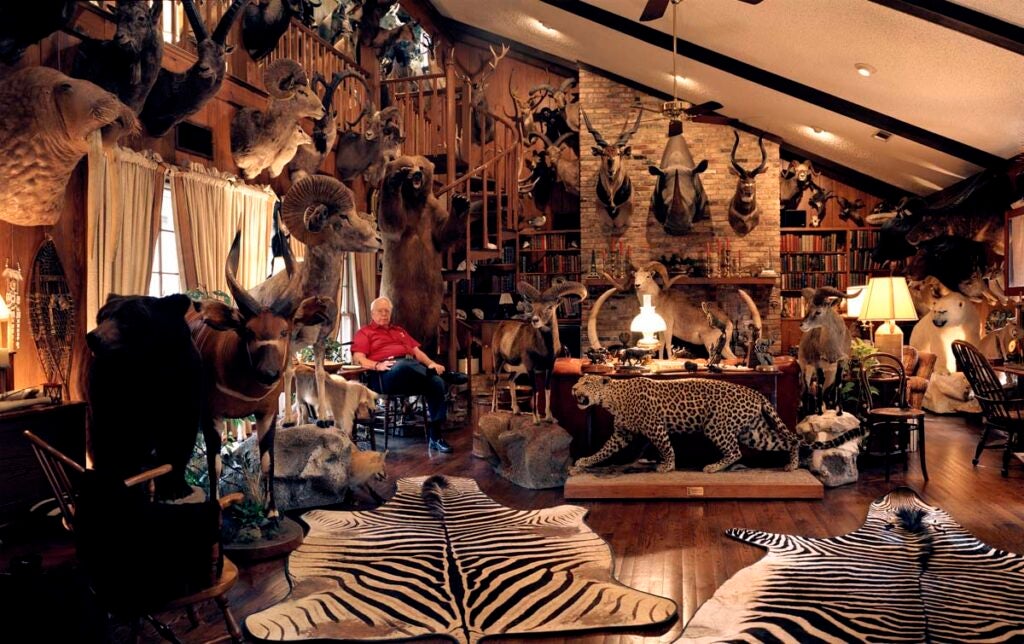 How do you want to represent situations to your viewer?

I’m not a wildlife photographer, I think that’s clear. But for most wildlife photographers, with one or two exceptions—Peter Beard is a prime example of that exception—their work is slightly clinical and slightly obvious, though unquestionably beautiful. I didn’t feel that I was ever seeing the way that we conflict with the wildlife as the environment changes, and that’s what I wanted to look at. I fight to get across to people that the work is human-wildlife conflict, it’s not about trophy hunting. Trophy hunting is an example of human-wildlife conflict. Because hunting was obvious, it was a good starting point, it makes you pay attention, and it makes you question what’s going on—”I don’t like hunting, but I’m engaged with this image, and I want to know more about it.” When I started this project I thought I knew what to expect, and I thought it would be a very clean, concise body of work, and it would confirm my feelings about hunting, and the people who hunted. The more time you spend within the game industry—and you actually do call it “the game industry”—the more you realize that we have to treat each situation in its own context. You can’t just say “this is what happens,” over the whole continent. You’ve got to use the tools available to you within each situation to avoid the conflict with the wildlife. 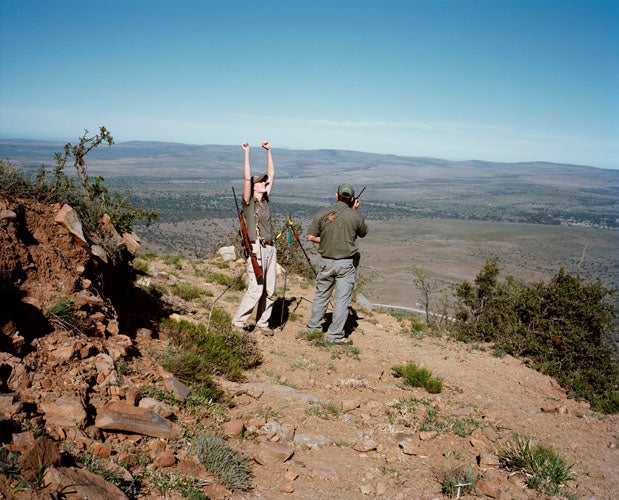 The work that I do, I generally get involved in it because I don’t understand it. It’s not something that I’m going to stand up and regale about, because I’m not that type of photographer, but I am going to say, “wait a minute, why do they do that? I don’t understand that.” I’m not trying to push something down somebody’s throat and say, “I think this is wrong.” What I’m doing is exactly what I hope the reader of my work does, and starts off where they don’t know very much about it, or they have a preconceived idea. It may confirm this idea, but it also might make them want to look further or understand a little bit more. So it’s very much a process of learning, particularly with “Hunters.” It’s very easy to produce dramatic images. What’s more difficult is to produce images that both sides will engage with, and want to look more. That has been the challenge. If you see the work and you want to know more, then I think I’ve achieved what I wanted to achieve.