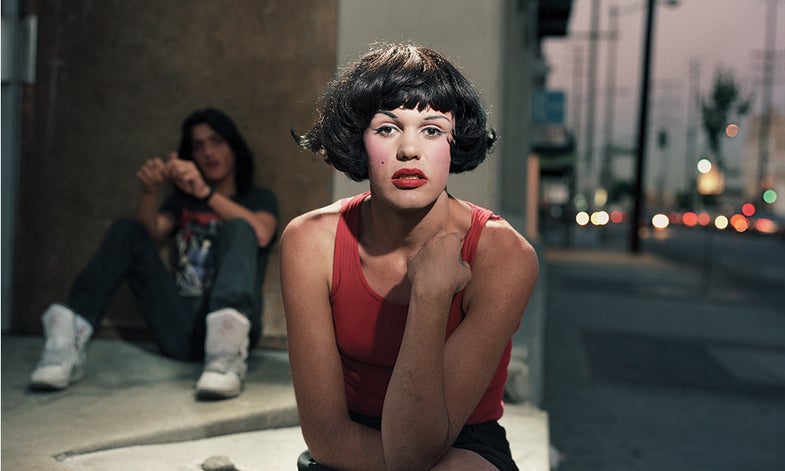 Philip-Lorca diCorcia employs brilliant lighting and intriguing scenarios to make photographs that ask questions. You get sucked into his world and wonder what just went down or what will happen next. A self-described former drug user and dropout, diCorcia’s perspective allows him to mine human emotions and fragilities via portraiture (his stunning images of hustlers were exhibited at New York’s Museum of Modern Art in 1993), stealth street photography (evident in his series “Heads,” first shown in 2001), and meticulously constructed scenes that could double as movie stills. It’s all filtered through his dramatic lighting, which has been embraced and emulated by fashion and editorial photographers alike.

Hanna Schouwink, senior partner at David Zwirner gallery, which represents diCorcia’s fine art, describes the light as chiaroscuro and says, “He understands the manifestation of light. He interprets aesthetics in a contemporary way but is inspired by the color and light you find in Old Master paintings. There is an understanding of humanity in his work. I think his works are metaphors for the difficulty of life and the complexity of life.”

His latest exhibition at Zwirner, East of Eden, showed diCorcia at the height of his powers, with images that merge the novel by John Steinbeck, after-effects of the 2008 financial crisis, and the Bible. As diCorcia recently explained to Great Britain’s Independent, “It’s about the loss of innocence. People started out believing that there are weapons of mass destruction, that they would never have to pay their mortgage back, that they could borrow against the house that they didn’t even own and buy another car, and the people who sold them these ideas knew all along that it was not true. It’s no different than the devil tempting Adam and Eve.” Narratives don’t grow much bigger than that one, and, when conveyed by diCorcia, the pictures more than match the words.