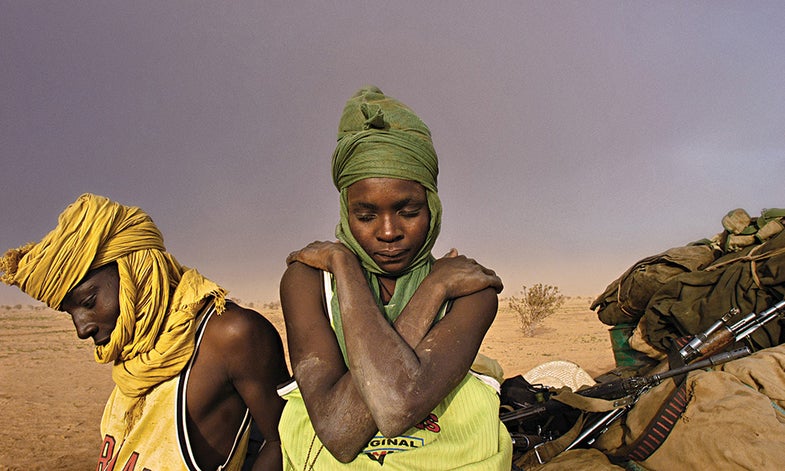 Photojournalists in hot zones often concentrate on battles and bloodshed, the so-called bang-bang shots that make front pages and homepages. Self-taught Lynsey Addario has endured front lines with cameras strapped around her neck, and she’s been kidnapped by terrorists and held at gunpoint. But she has come to recognize that truly gripping war stories take place beyond the guns. The winner of a MacArthur Fellowship, the author of the forthcoming memoir It’s What I Do (Penguin 2015), and a favored shooter for Time, National Geographic, and The New York Times, Addario uses compassion, sensitivity, and an unflinching eye to bring back humane tales from some of the most difficult places on earth. “I am drawn to people with hardship and humanitarian issues,” Addario says. “But I am a storyteller, and I look to convey information.”

Addario says that a large part of her time with subjects is spent getting to know one another to establish a sense of intimacy. Her closeness to her subjects is particularly apparent in a series on women who die during childbirth. “I went to Sierra Leone, where the statistics for that are the worst in the world,” she says. According to the World Health Organization, approximately 800 women die from preventable causes related to pregnancy and childbirth throughout the world every day. “I saw a woman die on camera in front of me. It was depressing, but also inspired me to keep doing the story. Merck used my photos and raised hundreds of thousands of dollars to fight those deaths.”

Fresh from a trip to India on behalf of the Nobel Peace Center to shoot a photo essay on child enslavement, Addario says that each assignment usually results in at least one crying jag. “I empathize with people, and it pains me that some people are born into privilege and others into sustained misery,” she says. “But that compels me to stay out there, tell stories, and try to bring changes to terrible situations.”

Correction: Jan. 9, 2015
The original version of this article misstated the maternal morality rate, which in Sierra Leone is reportedly 1100 deaths per every 100,000 live births, according to the World Health Organization (May 2014).

See more of her work at lynseyaddario.com