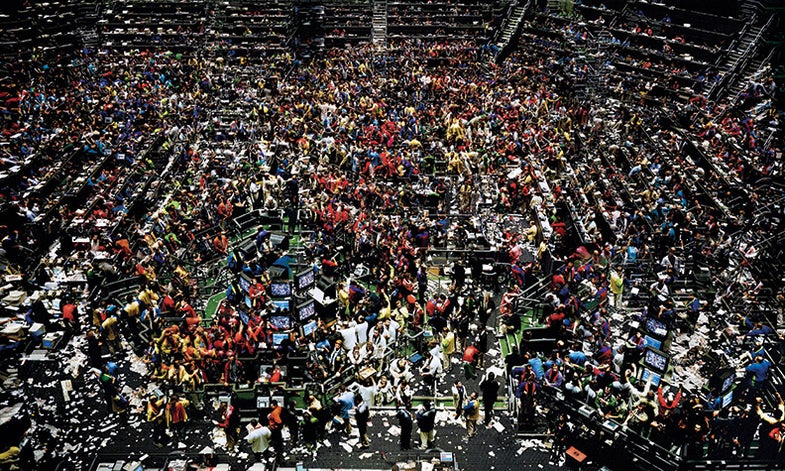 If timing is everything, then Andreas Gursky was spot on when he brought his first dramatically oversize photographs to gallery walls—and the public consciousness—in 1986. Gursky is among the influential photographers of the Kunstakademie Düsseldorf, aka the Düsseldorf School, who produce almost-clinical, distanced surveys of powerful spaces and structures.

Gursky’s work makes us look at expansive, sometimes densely packed, scenes of modern life—from racks of candy to exteriors of urban architecture to factory floors and trading floors— in new ways. After shooting with large-format cameras, he scans images and manipulates them, altering and weaving together various exposures in postproduction, before printing his pictures on a grand scale. By blowing them up to room-sized dimensions, Gursky created a new standard of photography.

Darius Himes, who heads up the international photography division at Christie’s auction house, remembers the shock of seeing Gursky’s work for the first time—in 2001 at the Museum of Contemporary Art in Chicago. “It’s particularly impressive when you’re used to seeing beautiful prints at 16 by 20 inches,” he says. “Gursky’s work operates at a scale that is completely different from what people are accustomed to. It’s as impressive as looking at a large Barnett Newman painting.”

Collectors went mad for his enormous photographs. It’s no wonder, then, that he and his work were taken on, in 2010, by top dealer Larry Gagosian, who is astute at recognizing major talent and betting that prices will rise. Gursky’s arrival helped revolutionize contemporary photography as collectible. “Now,” says Himes, “it’s all one big honey pot, with major galleries  having contemporary photographers on their rosters.”

The point was further driven home via the sale of Gursky’s  73×143-inch 1999 print of his piece Rhein II. Auctioned at Christie’s for $4.3 million in 2011, the work set a record for photography. That the final bid so far exceeded its pre-sale estimate of $2.5 million to $3.5 million, explains Himes, “shows that photography has entered into the ranks of serious collecting. The back-and-forth among collectors was unprecedented [for a photo]. It’s a great thing that a contemporary photographer did this, and it broadens the market for everyone.”