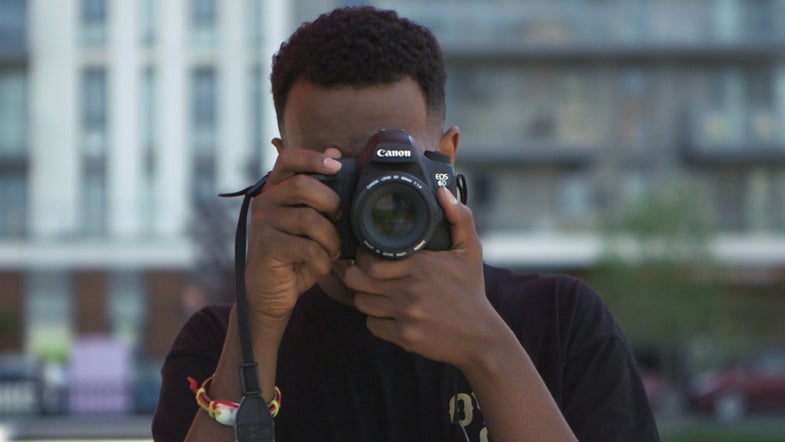 Toronto photographer Yasin Osman has a busy schedule. Between shooting assignments for clients such as Vice News, Facebook and Adidas, updating his Instagram account and working as his job as an early childhood educator, he doesn’t have a lot of spare time.

But when he’s in town, he is always sure to spend an afternoon at Shoot for Peace, a photo class he runs every weekend with kids in his community. He teaches them the basics of photography while they document the neighborhood where they live.

“The way I got into photography had to do with Regent Park, the neighborhood that I’m from,” says Osman, 23. The area once had a reputation for poverty, gangs and drugs, but has been rapidly gentrifying in recent years. And from his apartment window, he had a front row seat.

“I would use my mom’s cell phone to take pictures of these changes,” he says.

Despite the major changes, Osman says there’s no better place to grow up. Families are very close, and everybody knows everyone. For instance, all the kids in the neighborhood knew he was a professional photographer. The photo classes started six months ago, when they saw him with his gear one day and started posing for photos, but then had a lot of questions about how he made the photographs. Soon after, they planned to meet for classes, and came up with a group name.

“We were shooting the basketball and talking about shooting as well in terms of photography,” so we were just like shoot for what? Shoot for peace.”

The idea, he says, came about because of the neighborhood’s reputation. Despite the brand new condominiums, restaurants and happy families strolling around in Regent Park these days, just a few years ago it was better known for poverty, gangs and drugs than it was for the arts. But Osman hopes that’s going to change.

“I’ve lived here since I was about five years old,” Osman says. “When I was younger there was a lot of violence going on, and I had to grow up a lot faster.”

Growing up, not a lot of people were encouraging each other to pursue artistic careers. And Osman, who also works as an early childhood educator, wants to show kids what options they have.

“That’s the number one thing that motivates me,” he says. “I wanna do for them what I would have wanted for myself.”