An adventure in deep time, extreme travel, and the business of art 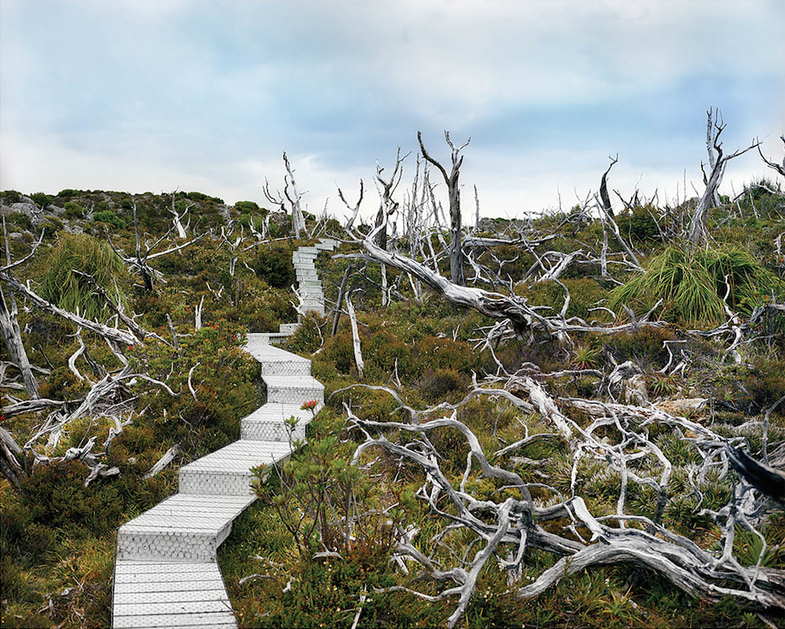 My name is Rachel Sussman. I live in Greenpoint, Brooklyn. I am a contemporary artist. That’s what I do for a living—no day job, just what sometimes feels like a 24-hour on-call job. Of art. Of arting.

Back in 2004 I took a trip to Japan. I had just finished an artist residency at the Cooper Union, and I had just purchased a new camera (a Mamiya 7ii, which would accompany me around the world and which I still shoot with). I went there without an agenda other than to continue making photographs about the relationship between humanity and nature. I ended up having this incredible adventure to a remote island where, I was told, there was a 7,000-year-old tree. Once you got to the island, it was a two-day hike to get to the tree. With the help of some people who befriended me on the ferry ride over, I made it to the tree and made some photographs of it, and continued on my way. The lightbulb moment came later.

Long before I visited that tree, I had been interested in developing an art and science project. I came up with many ideas, discarding each when I found them lacking the substance and depth I was looking for. I wanted to make work with some philosophical heft as well, and I kept returning to the concept of deep time—those geologic or cosmic measurements of time that so far outpace our human temporal experience that the mind boggles to contemplate them. Sometime the following year, I was in SoHo having dinner with some friends, and I told them about that trip—that’s when the lightbulb went on. All of the disparate pieces that I’d been thinking about for so long suddenly gelled. “The Oldest Living Things in the World” was born.

Part art, part science, part philosophy, “The Oldest Living Things” evolved into a 10-year-long transdisciplinary conceptual art project that has culminated in a set of 125 images of 30 organisms, an exhibition, and a book that’s now been published in several languages. It’s also been my own laboratory in making a living as an artist.

The idea was a simple one: to find and photograph continuously living organisms at least 2,000 years old; in other words, to start at “year zero” and work back from there. Research is a very significant part of the work. There wasn’t a pre-existing list of organisms that qualified aside from a few ancient tree lists, so I began with a lot of broad Google searches, tracked down published scientific research, then reached out to the authors. They were almost always thrilled that someone had found their work, especially someone outside of their field. Some invited me to join them in fieldwork; some sent maps and directions or connected me with local guides.

I soon found out that the world’s oldest living things are not just plants. There are also bacteria, fungi, and, I was surprised to learn, even some ancient animals (those being corals and sponges). These ancient survivors are spread across the globe. An undertaking of this breadth requires a lot of time, research, legwork, and money.

The book and exhibition include research papers and ephemera, all sorts of things that I collected on my travels—for example, interesting rocks, maps, quirky memorablia, and x-rays from when I slipped and broke my wrist in Sri Lanka when going to visit a tree there. All are culled from a whole decade’s worth of research, travels all over the world, and thousands of negatives. It was important to me to illustrate the layers of the project—some of the messy underbelly, if you will, and not just formal, final images on their own. The photographs themselves, mostly 44×54-inch prints and some smaller-sized editions, are art objects that are one component of this layered work. I approached the photographs of the organisms themselves more as portraits than as landscapes.

Access was another important component of the work. Some of my subjects, especially the ones that people are probably most familiar with, like the giant sequoias, are easy to visit. Most of them are not. Getting to a remote part of Greenland, for instance, to shoot lichens that grow just one centimeter every 100 years, was not easy. Getting to Antarctica was a challenge. Visiting the Kruger National Park game preserve in South Africa, I needed an armed escort just to get out of the Jeep to photograph a baobab tree lest I be eaten by a lion.

Beyond being prepared for natural elements, the other question was what other members of my same species had in store for me. For instance, in Pretoria, South Africa, on my way to photograph the underground forests, there was a warning on the radio about snatch-and-grabs in the area I was headed to, and my host said, “If you’re at a red light coming off the exit and you see people approaching you, blow the red light. It’s not safe, just go through.” Certainly I have always tried to be as respectful and culturally aware as I can be wherever I go, and as a woman often traveling solo, safety is not a non-issue.

None of this work would have seen daylight without funding and support. We live in a very commercial world that relies heavily on the myth of the entrepreneur. As such, artists are expected to play many roles. I’m my own CEO, accountant, fundraiser, marketer, creative director. I’m doing the advertising, the PR, showing up at parties and (hopefully) being charming. Somewhere in there I’m supposed to be coming up with this great new work, too. Finding a balance is a creative exercise in itself.

And the reality is that often the income art generates—for me that’s included art sales, book sales, speaking engagements, and writing—barely pays the bills, much less funds new work. I had to come up with some inventive fundraising tactics. I did a Kickstarter campaign in 2010 after I tried a benefit event. I’ve bartered for travel immunizations from a tropical medicine doctor. I bartered for dentistry. I’ve done lots of different things to help—all above board, of course. When you’re trying to do something like travel to every continent, that’s expensive. Making prints, making the art, is expensive.

Then I got the Guggenheim fellowship. When I found out I think I was laughing and crying simultaneously for about 10 minutes. I had begun applying when I started “The Oldest Living Things.” Every fall, I would work on my written proposal, take my portfolio over to their offices, and wait. Having to articulate each year what the work meant actually assisted my process and helped me refine how I thought about the work itself. My eighth attempt, in 2014, was finally the charm. That grant enabled me to continue my work, ensured my livelihood for the next year, and allowed me to proceed with my exhibition at Pioneer Works in Brooklyn—a show that has since moved to Bucknell University’s Samek Museum and will continue to travel.

I’ve also been quite fortunate along the way to receive some wonderful press. Still, just because an artist is getting mainstream exposure doesn’t mean that they’re financially solvent. There have been times when I’ve been the only person in the room not getting paid—providing photographs to a magazine or being a guest on a radio show, for instance. (I’m happy to note that this magazine is compensating me for my work.) Many artists fall prey to the “this is great exposure for you” argument, but I’ve become a huge proponent of people getting paid for their time and effort.

Unfortunately, we lack an infrastructure conducive to artistic pursuit. Here in the U.S. we have a model for funding the development of scientific research and technologies, sometimes ones that don’t yet have applications. There’s far less funding for creating art. I’m not saying that everybody who says they’re an artist should just get a check in the mail, but too often there’s an unproductive feeling of flying without a net. Under constant stress, one’s choices become more and more desperate, not more and more thoughtful and creative.

I feel incredibly fortunate to be involved in some of the exceptions, like the MacDowell Colony, the Guggenheim Foundation, and now LACMA Lab. A brainchild of the Los Angeles County Museum of Art, the Lab pairs artists with different tech companies and provides a sort of creative incubator to come up with what you might term “blue-sky” art: There are no limits, no set expectations of a final product. It’s just meant to stimulate ideas by getting exposure to these different areas and ways of working. For me that means continuing my look at deep time, now even further back into cosmic time and out into space.

Ultimately, the core of my work with LACMA Lab and on “The Oldest Living Things” is long-term thinking. When we consider the values of the systems in which we live and work in the context of deep time, an ethical question arises. We tend to forget that humanity is only one component of a vast and delicate ecosystem, and that our lives on Earth are a drop in the bucket of a vast swath of time. If we can employ long-term thinking into our everyday lives, how might that change our decisions? I hope that my work can serve as a touchstone for thinking outside ourselves, beyond your own lifetimes and everyday lives. I hope it helps people connect in ways that they wouldn’t otherwise.

Rachel Sussman is a Guggenheim, NYFA, and MacDowell Colony Fellow and a member of Al Gore’s Climate Reality Leadership Corps. Her book, The Oldest Living Things in the World, is a New York Times bestseller.