Flickr will be eight years old this February. In the ultra-compressed time frame of the web, that’s some impressive longevity,... 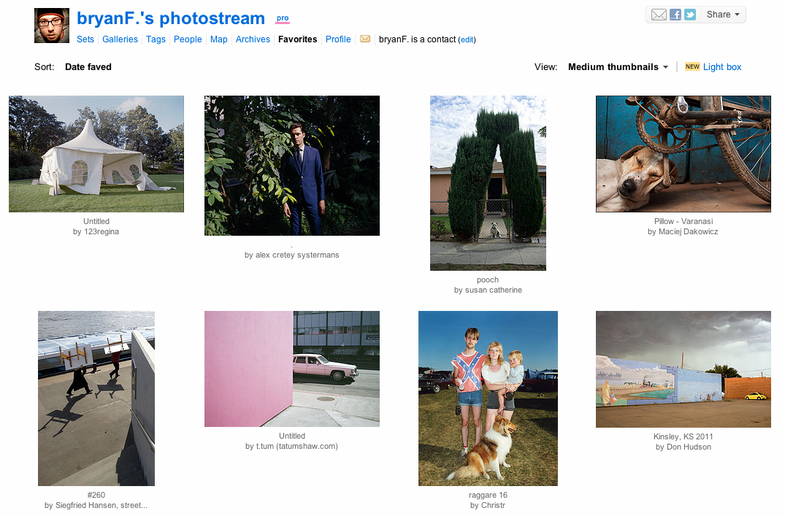 Flickr will be eight years old this February. In the ultra-compressed time frame of the web, that’s some impressive longevity, and it’s a testament to the site’s smart design, easy usability and powerful community tools.

But in recent years, finding interesting photography on Flickr has become a bit more challenging. The site has grown exponentially, and not always gracefully. Depending on your entry point, it’s possible that a visit to a Flickr photo’s page will dump you into a somewhat confusing place, saturated with blinking awards, mundane comments and hermetic subcultures. As a result, many serious-minded photographers won’t go anywhere near the site today, and honestly, I have a hard time blaming them.

But as one of the web’s largest and most attractive places for photographs to be shared, the site is still an excellent source for finding great photography. You just have to know where—and how—to look.

To really take advantage of Flickr, you need to make connections—both with other photographers, and with groups. If you think you’re going to randomly search Flickr for photographs and find consistently good work, you’re going to come away frustrated.

In this article I’ll highlight my own approach to using Flickr, and offer some tips that should point you in the right direction. 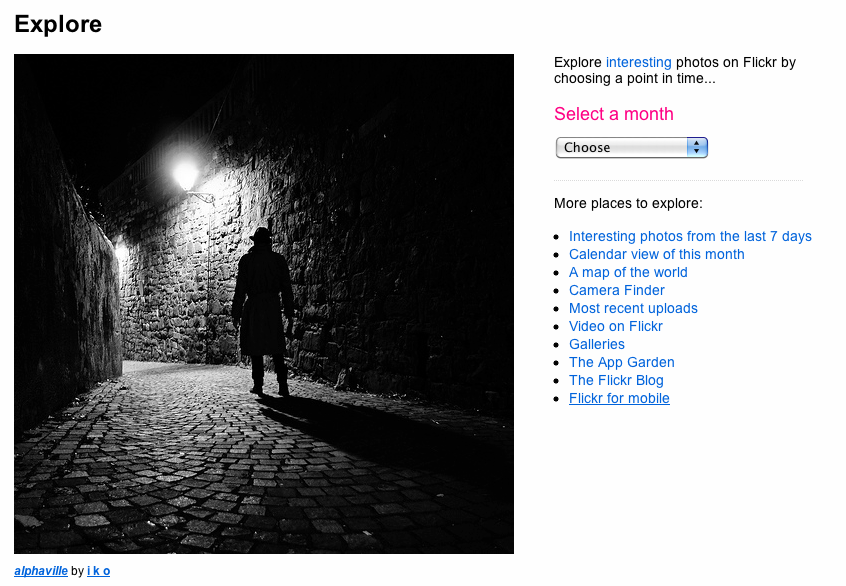 The Explore page on Flickr is an algorithmically determined gallery of what’s popular and trending throughout the entire site, and it’s probably the first place people go in search of what’s popular or interesting on the site. While it can uncover the occasional gem, for me, it’s best to pretty much ignore it; Flickr’s “interestingness” ‘bots tend to favor the more clichéd, overly sytlized, over-processed work on the site. The word “schlock” comes to mind. Not my taste.

The Flickr blog is another resource you can use to get an idea of what’s going on. However, its focus is a bit too broad to highlight much individual work, primarily because the Flickr audience itself is so broad. From time to time they’ll uncover some interesting projects, or announce new archives added to the Flickr Commons (the site’s efforts to build and maintain rights-free archives of imagery for public use), but for the most part much of the work they feature tends to favor the light-hearted and inspirational.

Which is certainly fine, but if you’re looking for more serious work, you’ll have to dig a bit deeper. And the best places to start are Flickr Groups. 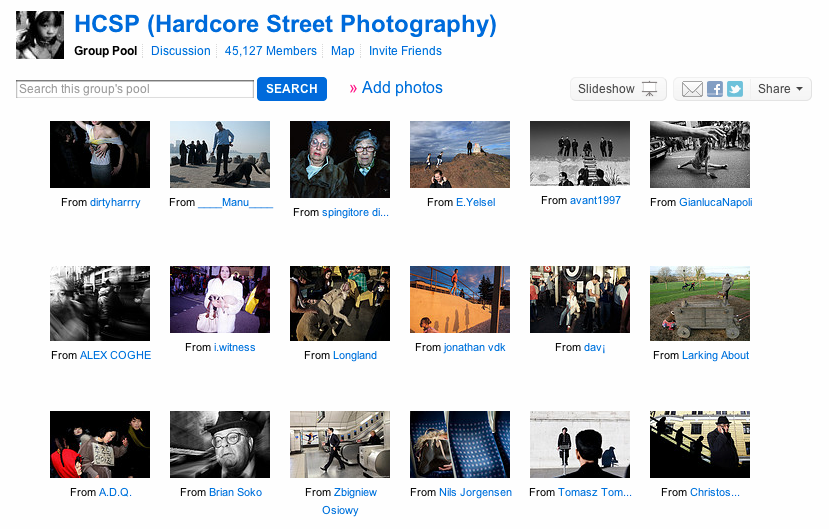 One of the simplest, yet most brilliant features Flickr introduced were groups. From the beginning, anyone could start a group, focusing it on any conceivable topic. Other users could then submit photographs to the group, start discussion threads, and give each other feedback. Voilà: instant community.

When I first joined Flickr four years ago, I was interested in street photography, and the first group that came up in a basic search was Hardcore Street Photography. I joined it, and four years later I can say I’ve met many very good friends through the group and discovered some really great photography.

Submitting your work to group is a great way to immediately get involved. Some groups will be heavily curated like HCSP, with the group’s administrator choosing which submissions he/she wants to include in the group’s photo pool. So for some groups, it can became a bit of a game to try to get in, while others choose to allow all submissions to appear in the pool instantly. By submitting photos and participating in group discussions you can pretty quickly understand the vibe and culture of the group.

It may have been just dumb luck that I discovered HCSP and eventually connected with people who’d gone on to form their own spinoff groups; you might have to do a bit of searching before you find a group that suits your interests. The first place I’d go would be to your other social networks and your friends. If you’re on Twitter or Facebook, ask your friends which groups they follow. You never know what the hive-mind will return. (You’ll also find a list of a few interesting groups to start with at the bottom of this page).

The next place to look for interesting groups are those associated with the online blogs or magazines that you follow and enjoy; many of them will have Flickr groups where they take submissions. These can be hit or miss: some are tightly curated, and could lead to you being featured by said magazine or website, while others are unrestricted pools where you’ll encounter thousands of photographs. It can make the browsing a bit easier, but you’ll still need to spend some time searching to find photographs that resonate with you.

When you jump into a group, the first thing I’d check is whether or not the group pool is curated. Those that are curated tend to be a bit more active and interesting because the admins invest more time in the group. I’d also check the discussion. Are they interesting? On topic? Haven’t been updated in weeks? These days I tend to think most discussions have migrated to other social networks, primarily Facebook, Twitter and Google+, but there are still some groups with vibrant discussions, like HCSP.

Like all social networks, Flickr is much more interesting when you have friends to follow! There was a time a few years ago when Flickr was the number one destination for following photographers online, but with the emergence of Facebook, Tumblr and Twitter, it can be challenging to figure out exactly where people are spending the majority of their time.

That said, there are still thousands of interesting photographers to meet and connect with on Flickr by adding them to your contacts list. And while you can do all sorts of things on the other social networks, Flickr remains purpose-built to share photos. There’s something to be said for that level of focus.

The best way to keep up with what your Flickr friends are doing is through the main contacts page, which shows you what they’ve most recently uploaded. Over the last few years, Flickr has improved this page, allowing you to view different sized thumbnails, as well as each photo one at a time in a light box. I generally view the medium thumbnails and only one recent photograph from each contact.

Once you build a nice list of contacts, I encourage you to take a look at their list of “favorites.” These are the photographs that people essentially bookmark and accumulate over time as they move through the site, and the browsing layout is pretty much the same as the contacts page. Looking at my friends’ favorites adds another filter and layer of serendipity to the experience. You can even subscribe to user’s favorites through RSS if you’re so inclined.

For me, adding these types of layers and filters, by subscribing to favorites and well-maintained group pools is the best way to find work on Flickr. I hope you have similar luck!

A few group suggestions to get you started:

Bryan Formhals is a Greenpoint, Brooklyn based writer and photographer, and the founder of LPV Magazine. He blogs at LPV and tweets at @LPVMagazine