How Does It Feel To Have Magnum Photographers Document Your Town?

Rochester seen from a Magnum perspective 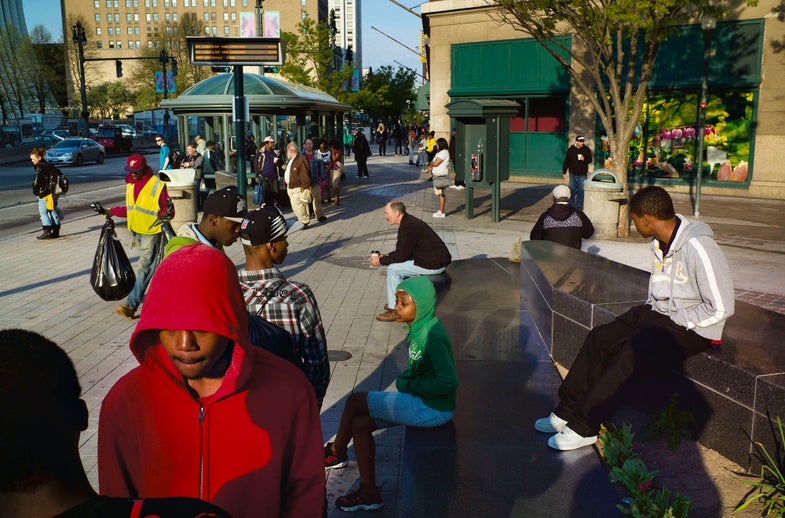 In 2012, eleven Magnum photographers descended on Rochester, N.Y. for three weeks. To the group, Rochester looked like the perfect place to continue its Postcards from America project, where a set of photographers headed out to create an archive of a place in a short time frame.

Susan Meisalas, Martin Parr, Paolo Pellegrin, Alessandra Sanguinetti, Alec Soth, Jim Goldberg, Bruce Gilden, Larry Towell, Chien-Chi Chang, Alex Webb, and Donovan Wylie would work for the given time period, then edit their final selections down to 100 images. The pictures would be sold as a box set in an edition of five and eventually published in book form. The book from that three-week project, Rochester 585/716: A Postcards from America Project, was released this month from Aperture/Pier 24.

During the photographing, and afterward, there was some controversy locally. The project’s organizers had been drawn to the city for its relationship to Eastman Kodak, which was founded there, and its recent filing for bankruptcy. Tate Shaw, executive director of the Visual Studies Workshop, which acted as a sort of host for the event, noted: “My observation was that people were saying: Hey why didn’t you photograph something that’s exciting and interesting and beautiful and why we all live here?”

But the photographers seemed most interested in finding the kinds of subjects they typically covered. “Paolo Pellegrin is a war photographer so of course he is going to want to go to the [higher crime] Crescent neighborhood—he wants dark and difficult places. Susan Meiselas is a big thinker so she went straight to the Hickey Freeman [garment] factory and tried to get out all the stories of the people,” Shaw explained. “Everybody had their distinct point of view. Alec Soth was interested in community groups. Parr was just out looking for people eating food and being American.”

According to Shaw, the project’s biggest impact was on the students who worked as assistants to the photographers during those weeks. Coming from both the Rochester Institute of Technology and the VSW’s graduate program, the students acted as researchers, fixers, assistants, and more. It was an incredible educational experience for them—some of those students went on to work for the photographers after graduation.

So did the result add up to an accurate portrait of the city? Not exactly, says Nathan Lyons, director emeritus of the Visual Studies Workshop, who wrote a short piece for the book. “I don’t think anybody could capture Rochester in the time that they were here.”