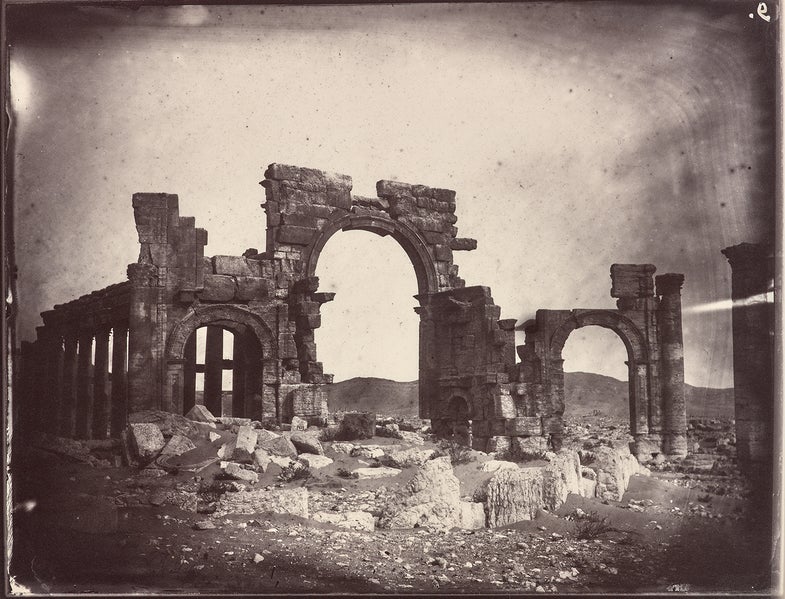 Earlier this month, the Getty Research Institute launched a unique online exhibition that blends ultra-high resolution historical photographs with engravings to help tell the story of 18th and 19th century documentarian endeavors to record the remains of the ancient city of Palmyra in present-day Syria. Photographs by Louis Vignes and earlier drawings and etchings from Louis-François Cassas are paired with text that breaks down the history of Palmyra’s classical past and contemporary peril.

Syria’s civil war, their refugee crisis worldwide and ongoing domestic battles with ISIL (The Islamic State in Iraq and the Levant) have dominated the news in recent years. Its people have suffered the destruction of not only their homes, but also their history. In 2015, ISIL, also known as ISIS and Daesh, occupied the ancient city of Palmyra, which since 1980 has been designated a UNESCO world heritage site. The city itself was once a flourishing desert oasis and bustling capital of trade under Roman rule during the 2nd century CE, and briefly, the center of its own empire for three short years during the storied reign of the Palmyrene empress Zenobia. 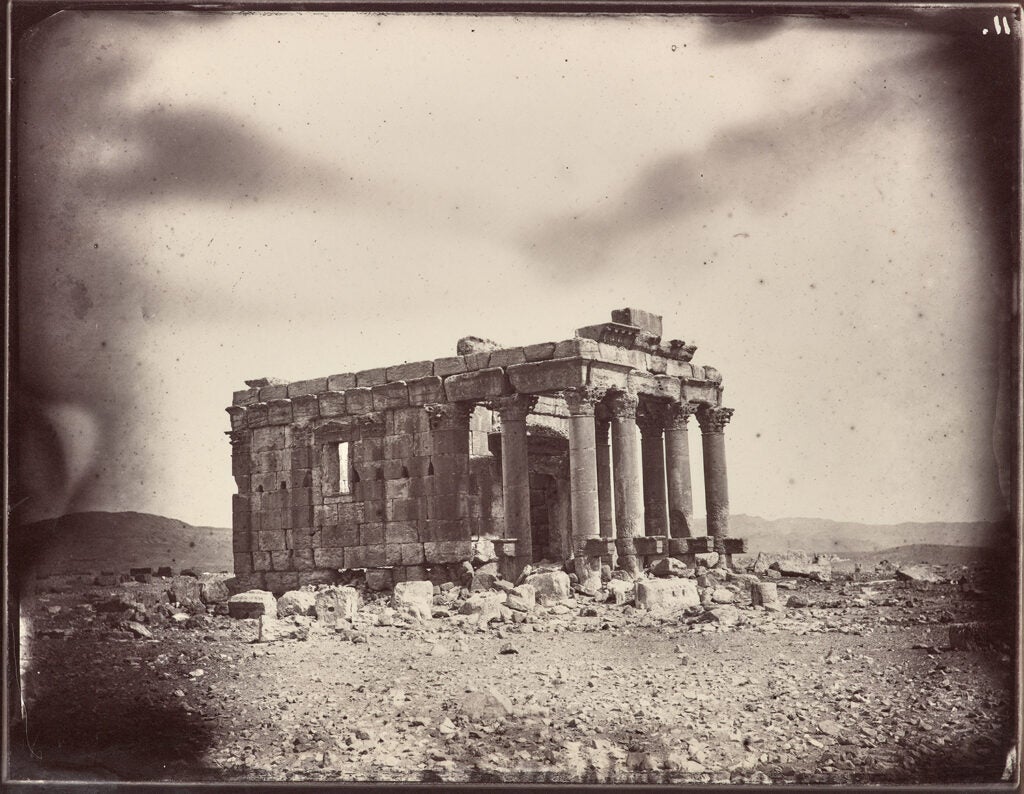 The temple, which was dedicated to a Caananite sky god and built in the 2nd century CE, was destroyed with explosives by ISIL in 2015.

From ancient accounts and modern remains of the city, scholars have long known it was once a marvel of architectural achievement, supporting up to 200,000 inhabitants at its zenith. Despite being destroyed and rebuilt under various Roman emperors and laid waste again in 1400, many of Palmyra’s ancient wonders persevered in some form into the 20th century. To the horror of not a few preservationists, after occupying the city ISIL militants set about destroying a number of the remaining ruins, including the iconic Monumental Arch which they toppled with dynamite.

Luckily, Palmyra has been extensively documented since Cassa and Vignes set out to record its classical relics. In fact, so many photographs of the Palmyra now exist that the ruined Monumental Arch has since been reconstructed with the aid of a computer-generated 3D model made using contemporary photos. While many images of the ancient city can found with a cursory online search, the pictures found in Getty’s online exhibition provide a unique record. 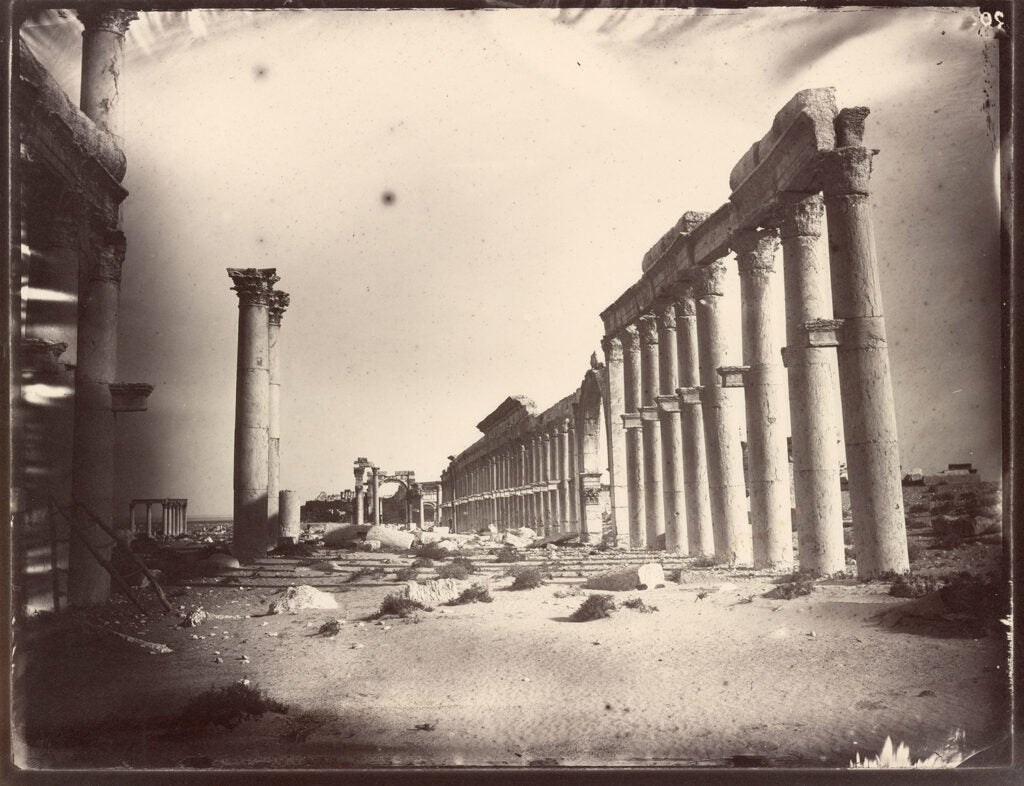 The main colonnaded avenue of Palmyra, much of which is still standing, was built during the second and third centuries CE.

Luis Vignes, who was a sea-captain by trade, was the first person to set a lens to the ancient city. He was trained by the pioneering photographer Charles Nègre at the behest of a French nobleman who self-funded an expedition to the Levant to photograph its classical wonders. Vignes’ glass and paper negatives capture Palmyra as it will never again exist and with a romantic sfumato at the edges, a result of the often imprecise nature of early photographic processes. His mentor Nègre was commissioned to print these photos and prepare them for mass production, using a novel photoengraving process. These prints, some of which are entirely unique, have been re-photographed digitally in remarkable detail by the Getty Research Institute and are available on the exhibition site to download as 90+ MB files for closer inspection offline. 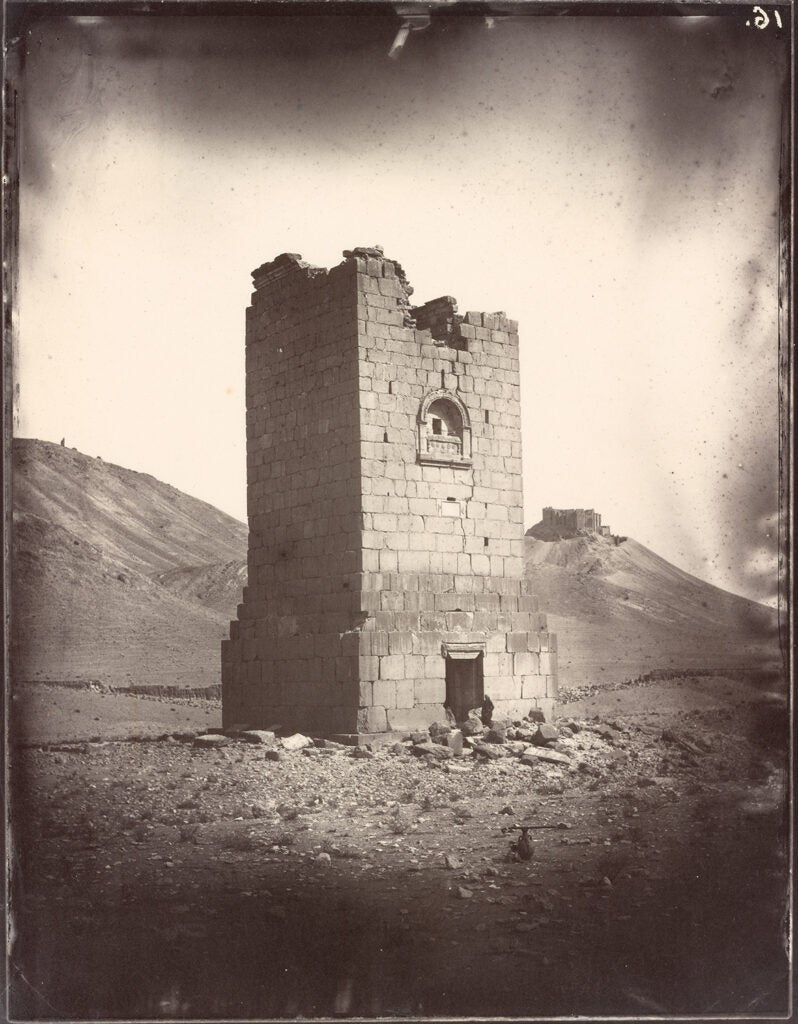 An ancient funerary tower at Palmyra, one of several which once housed the tombs of the ancient nobles of the city.

Louis-François Cassas’ work, while not photographic, should not be overlooked. An artist and architect himself, Cassas visited Palmyra in the late 18th century as part of a French diplomatic mission to the court of the Ottoman Empire, which controlled the territory that is now Syria. While Cassas’ work is tarnished by his Orientalist depictions of the city’s Bedouin inhabitants, his drawings depict its ruins in dramatic Neo-Classical splendor. More interestingly, his engravings provided some of the best-known early modern conceptions of Palmyra’s original grandeur, portraying the city as it might have looked in its second-century heyday—the Enlightenment equivalent of contemporary computer-rendered 3D models.

The online exhibition weaves Cassas’ and Vignes’ work together interchangeably to great effect, creating illustrated sections which detail the ancient history of Palmyra, its rediscovery, modern archaeology and contemporary peril and a brief background of the artists themselves. For the time being, the city remains endangered and is still occupied by ISIL, but the Getty’s online exhibit offers a great opportunity to see this ancient site through the distanced lens of history. 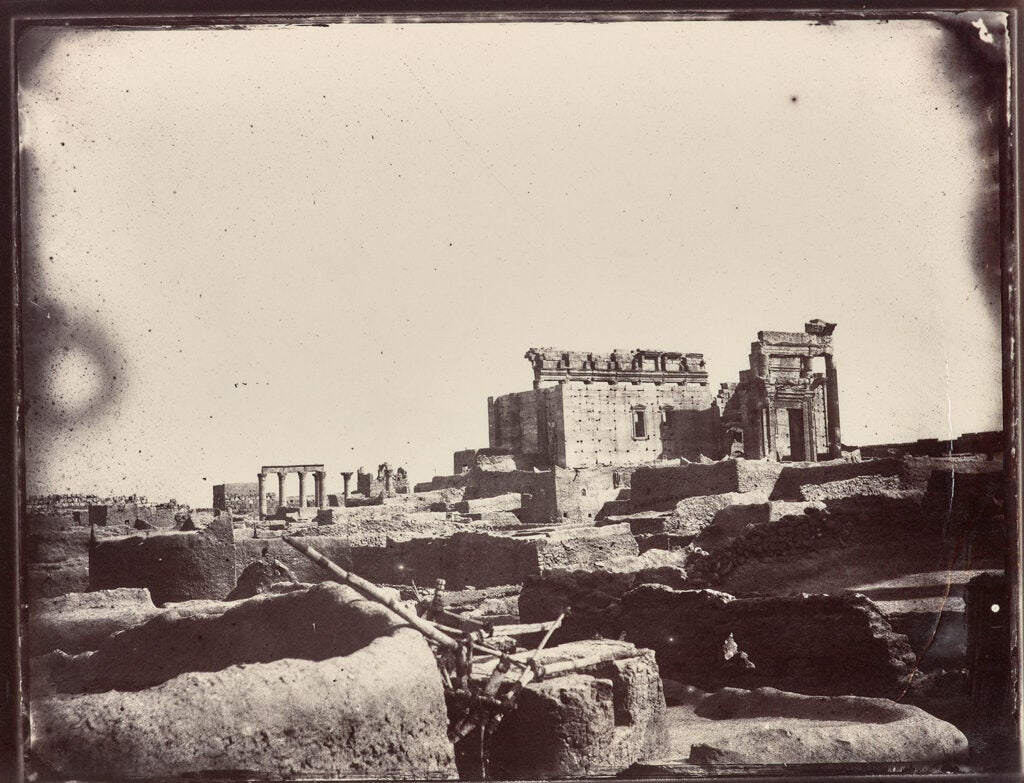 The temple, built to honor the Mesopotamian deity Bel or “Baal” was confirmed by satellite imagery to have been demolished by ISIL.
American Photo
Ancient
Architecture
Architecture Photography
Documentary