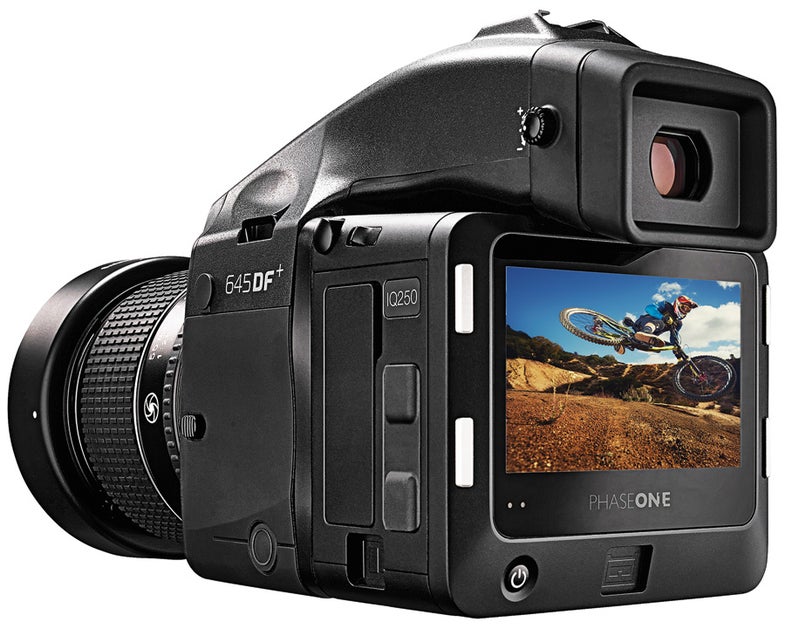 In the film era, medium-format photography was considered 35mm’s clumsy cousin, trading a bulkier camera and slower operation for substantial gains in image quality. That calculus has persisted into the digital age, making medium-format digital cameras a nonissue, but the reasons are more complicated now. Back at the turn of the millennium, Canon’s EOS D30 digital SLR was first to swap out the trusty, archetypal CCD—the charge-coupled device that had served to capture images since the first video camcorders—for a CMOS image sensor. (That stands for “complementary metal-oxide semiconductor,” if you care.) Almost all digital cameras with image sensors 35mm-sized or smaller have since followed suit, and for good reason. The gains of CMOS’s very different image-capture technology are considerable.

Medium-format cameras, by contrast, have clung to their clumsy CCDs—until late January, when out came the first medium-format digital back to incorporate a CMOS image sensor, the Phase One IQ250. Hasselblad tried to claim the race with a promissory note for the Hasselblad H5D-50c, which should be available by the time you read this; Ricoh isn’t far behind with its Pentax 645D 2014. (The year is part of the name, at least for now.) The Phase One and Hasselblad reportedly use the same 50-megapixel Sony-built chip; specs on the Pentax were yet to come as of this writing.

That it took so long for CMOS to make its way into medium format seems inexplicable. While CMOS sensors were once inferior to CCDs in their image quality—which made them a nonstarter for quality-driven medium format—this hasn’t been the case for years. CMOS chips are also much less power- hungry than CCDs. They allow images to be captured more quickly and in rapid succession, which in turn produces smooth video. But the game-changing thing about CMOS sensors in medium-format cameras, at least for photographers working outside the studio, is that they are more efficient than CCDs at their main assignment, gathering light. More about this in a minute.

One other benefit, of no small consequence to manufacturers, is that CMOS chips are cheaper to make—if you make them fairly small. There’s the rub. Cutting up a silicon wafer in pieces big enough for medium-format chips is a dicey business. And a few bad pixels can ruin an image sensor that is much larger and thus more expensive to manufacture than a 35mm-sized, or smaller, sensor. You have to throw more of them away. Given that sales of medium-format cameras are orders of magnitude less than those of more compact cameras, the economies of scale that apply to smaller sensors—whether in a cellphone or a digital SLR—simply don’t come into play.

Indeed, while CMOS sensors are cheaper to manufacture, it seems this won’t make an immediate difference in the breathtaking prices of medium-format digital cameras. The new Phase One costs $35,000, nearly 12 times the price of the full-frame Nikon D800, which at 36MP has only a third fewer pixels. That doesn’t even include the $5,000 or $6,000 for a medium-format camera body. The Hasselblad H5D-50c is almost as pricey. (We can hope that the Pentax will be less expensive given that the current 40MP Pentax 645D now costs a paltry $7,000.) And whether for cost-saving reasons or manufacturing constraints, that price buys you a physically smaller sensor than traditional medium format: The Phase One IQ250’s CMOS chip measures 33×44 millimeters, as opposed to the 40x54mm CCDs of previous Phase Ones. This “sensor crop” causes an effective increase in focal length, just as it does with the APS-sized chips used in 35mm-style DSLRs. In the IQ250’s case, the focal length multiplier is 1.3X.

Forgetting those prices for a moment—and hoping that Moore’s Law drives them down in a hurry—in what ways does a CMOS sensor really benefit medium-format photographers? For one thing, it handles more tasks than a CCD. A CMOS chip converts the analog electrical information that comprises a photograph into digital form (A-to-D) before that data even leaves the chip, while a CCD must send analog information to a separate processor for conversion. And, unlike a CCD, a CMOS image sensor makes initial autofocus calculations onboard. When it does send data elsewhere, a CMOS chip has more pathways along which to dispatch electrons. These abilities allow a CMOS chip to speed up the camera, affording a faster framing rate and nimbler autofocus, much-needed improvements with still-sluggish medium-format digital. (CMOS, along with ever-faster image-processing engines, has endowed smaller cameras with flashy features such as “sweep” panorama and in-camera HDR.) In the Phase One IQ250, the CMOS chip doubles shooting speed, though at 2 frames per second rather than the previous 1 fps or less, photographers probably won’t be shooting sports anytime soon with medium-format digital.

They will, however, be able to capture images in much lower light levels without as much annoying image noise. While current CCD-based medium-format digital cameras give iffy results even at their modest top sensitivity of ISO 800, the new CMOS models promise pleasing image quality at that speed and very acceptable quality at their top ISO of 6400. Photographers will be able to handhold a medium-format camera where none has gone before—capturing unblurred available-light candids that weren’t possible with CCD models. What’s more, CMOS delivers better image quality at longer shutter speeds, so it should open up new possibilities with tripod-mounted photography as well.

If the idea of finally putting CMOS sensors into medium-format digital cameras is to make them a viable alternative to high-resolution DSLRs, we’re not there yet. The first of these models, even if they deliver the expected image quality in lower light, are still likely to be too sluggish for photographers accustomed to 35mm-style DSLRs. Just as significant, they’re simply too expensive for all but the most well-endowed shooters (and those who rent or lease their gear for commercial work). Yet as anyone who has watched digital technology race through the photographic world should know by now, those hurdles may yet be cleared.