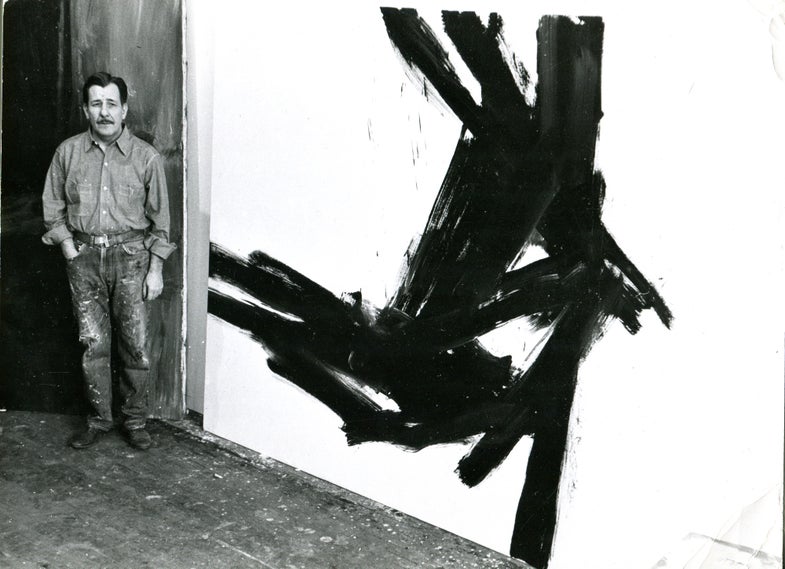 With the intimate access of an insider but the cool gaze of an outsider, Fred W. McDarrah captured the cultural and political life of New York City during his 50 years as staff photographer and later photo director of the Village Voice. Besides that influential day job, he may be best known for his depictions of the Beat scene (and his infamous Rent-a-Beatnik service) in the late 1950s and early 1960s. So his show, “Fred W. McDarrah: The Artist’s World,” now on view at the Steven Kasher Gallery in New York (April 24 – June 6, 2015) may come as a revelation.

McDarrah caught many of the most important painters and sculptors of the mid-20th century not just in considered environmental portraits, posing with their work, but at home in cold-water lofts, at post-opening Chinese dinners, and at play in Provincetown and eastern Long Island. Ad Reinhardt, Willem de Kooning, Robert Rauschenberg, Franz Kline, Lee Krasner, and countless other Abstract Expressionists appear here, as do Pop Art icons—Andy Warhol (never one to avoid a camera) chief among them. McDarrah, who died in 2007 at the age of 81, also captured portraits of important women artists such as Eva Hesse, Hannah Wilke, and Alice Neel, often long before they’d received much coverage in the press.

Although the Kasher show includes portraits that McDarrah took through the 1970s and exhibition prints he made as late as 1995, most of the exhibition is dedicated to the photographer’s 1961 book, The Artist’s World in Pictures. A vitrine displays the original volume, a small paperback long since out of print, along with the 1991 second edition (also out of print), which adds the subtitle “The photo classic that documents the New York School Action Painters.” Documents related to the publication fill the other shelves. More fascinating, to my eye anyway, are the postcards announcing events hosted by The Club, an artist’s organization that formed the epicenter of avant-garde art in New York and the Abstract Expressionism movement specifically; McDarrah served as doorman and keeper of the mailing list during the 1950s, and it was here that his amazing photographic record of the scene began.

Amazing it is. Kasher dedicated a long wall to displaying more than 110 original prints made for the book. They’re small, yet in their detail and tonal value they far outstrip their published version: The 1961 paperback doesn’t come close to doing them justice. But this show isn’t really about the photographic objects themselves—it’s about the milieu McDarrah so intimately photographed. There’s Jasper Johns playing bar-room shuffleboard with Merce Cunningham, John Cage, Rauschenberg, and the rest of the gang. Yes, Jim Dine actually painted himself silver for a performance piece as an “aluminum car.” A tiny photo of a batter in a softball game completing a powerful swing turns out to be “home run champ” Franz Kline.

Fred McDarrah may never have numbered himself among the great artists of his generation—he didn’t consider himself an artist at all—but he sure captured them in the wild.