The state of news photography today 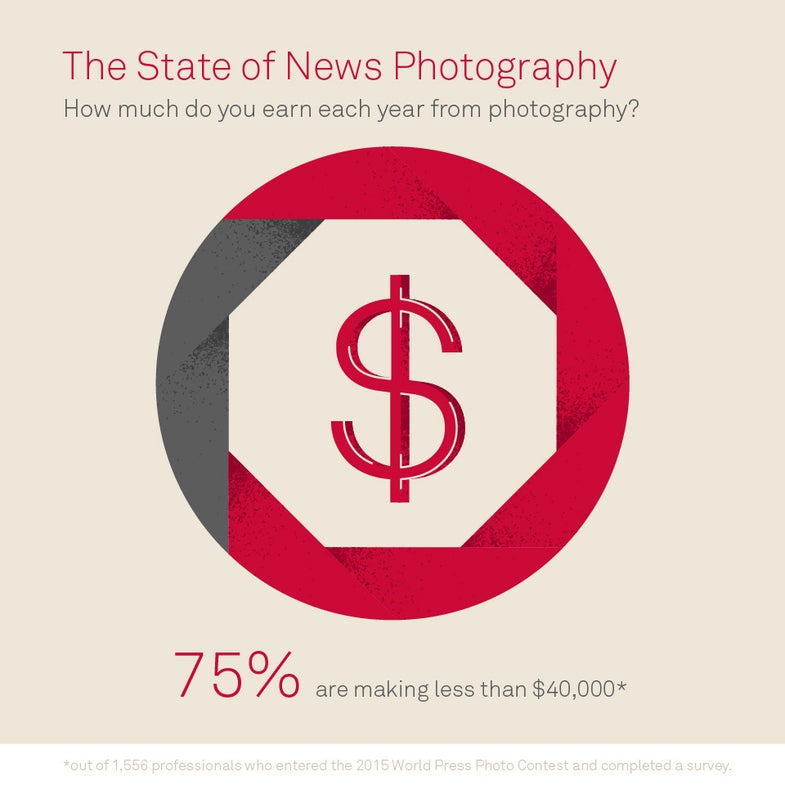 The Reuters Institute for the Study of Journalism recently published a report in conjunction with World Press Photo confirming what we’ve long suspected—it has never been harder to get by as a full time professional photojournalist.

This lengthy and thorough document bases its findings on the results of a volunteer survey completed by entrants of the 2015 World Press Photo Contests. Participants hailed from more than 100 countries but were concentrated mostly in Europe. Sadly, if unsurprisingly, the report reveals that contemporary news photographers face increasing professional demands while failing to find stable and adequate sources of income.

What’s more, female photojournalists consistently reported having even greater difficulties than their male counterparts. All of today’s working news photographers must do more with less while coping with the prospect their plight will likely continue. You can read the Executive Summary (pages 6-8) of the report for more details, some the more startling findings of which are excerpted below:

-More than half of survey respondents listed themselves as self-employed and three-quarters worked full time as photographers.

-80% reported that they worked alone.

-About a third of new photographers use video but almost all said they’d prefer to stick to still.

-More than two-thirds of the photographers surveyed had a college degree.

-The majority of European and North American respondents reported that they made less or “a lot less” than they did 5 years ago.

-Almost all said they felt vulnerable to attack or threat while on the job.

-More than half of the photographers who responded to the survey said that social media is an integral part of their work. Most said they received some sort of benefit from using social media but only about a quarter reported that there was actually any financial benefit to them.

-Over half of those surveyed still felt positive about their jobs, despite the adversity that they faced.