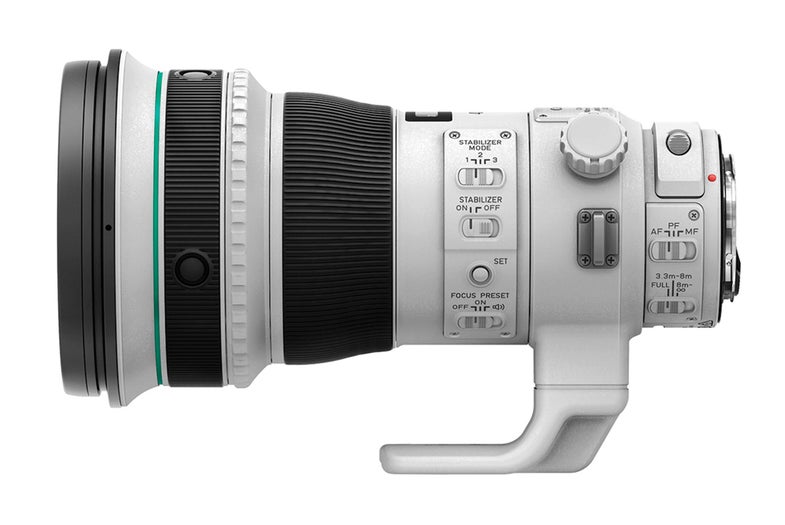 Photographers not intimately familiar with Canon’s bevy of super-telephoto prime lenses may think the green stripe toward the front of the barrel of the company’s new EF 400mm f/4 DO IS II USM looks a little odd. Surely it’s supposed to be red, right? But this isn’t a typical piece of L-series professional-grade glass—it’s a long-awaited update to a rather unique 400mm lens for Canon.

The DO in the lens name stands for Diffractive Optics, a technology that Canon has been using in its quirky 400mm lens for more than a decade. This arrangement of the internal elements changes the path of light traveling through the lens barrel, allowing for an overall package that’s substantially smaller and lighter than the typical telephoto bazooka.

The shrink ray, however, does not come without side effects. The spacing between the elements in the original version of this lens often led to more flare, adding to its reputation for low contrast overall. The company seems to have addressed the lion’s share of the flare issue with this new 400mm lens for Canon. Yes, images still exhibit flare when shot directly into the sun, but the massive hood that Canon provides with the lens helps quite a bit. The contrast, while still not quite on par with the other premiere L-series primes, can no longer accurately be described as flat—neutral, maybe, but not flat, and neutral is often what photographers are looking for.

The 400mm lens for Canon has also shrunk noticeably, though it’s still an extremely conspicuous piece of equipment. It weighs in at just over 4.6 pounds, but on a pro body the balance is excellent—the reduced length moves the center of gravity back toward the camera body. And compared with the 8-pound monster that is Canon’s EF 400mm f/2.8L IS II, it feels manageable, even when shooting without a tripod or monopod. That’s surprising for any supertele that comes with its own suitcase for transportation.

More important, Canon gave the image stabilization system a substantial upgrade, promising four stops (or more) of handholding leeway. There are a few shots in our test pool at 1/30 sec that are sharper than they have any business being. When you first activate it, though, the IS does feel a little slow, which most likely has something to do with the sheer size of the elements being moved around inside the barrel.

Like its bigger telephoto siblings, the 400mm lens for Canon has three distinct IS modes to choose from, including a traditional mode to counteract shake, one made specifically for panning, and a newer mode for tracking moving objects. That last situation is one in which photographers typically tend to eschew IS, but we were impressed with its ability to capture action shots without exhibiting the wobbly lag that sometimes comes with IS. In addition, in this mode IS doesn’t have to be turned off when the lens is on a tripod.

Another new feature of the DO line is Power Focus, a shooting mode geared more toward filmmakers than still photographers. It’s basically a way to pull focus in a smooth, variable-speed fashion by using electronic autofocus drive. While most filmmakers will probably stick to the old manual focus method, it certainly works in a pinch. And although it’s nice to have, Power Focus will likely feel superfluous when used for still photography.

The front lens coating has been seriously enhanced, not only to better combat ghosting but also to actively fend off dust and every other kind of grime that would otherwise be instantly attracted to the massive front element. This 400mm lens for Canon even repels finger­ prints, which made it a little nerve wracking to test. One area where the new lens stutters a bit is in its ability to focus up close. The new f/4 DO just squeaks in under 11 feet, while the much bigger f/2.8 version checks in around 8.8 feet. Of course, photographers use a telephoto this long to shoot far away, but it’s something to consider if you tend to get physically close to the action.

Despite its relatively small size, the 400mm lens for Canon still comes with the big price tag you’d expect from a pro-grade supertele. At $6,900, it likely won’t be showing up on the sidelines of many Pee Wee football games, but for travel-hardened sports, adventure, or nature photographers, diffractive optics could be a real boon. (Canon isn’t the only one doing this: Nikon’s latest 300mm lens, announced earlier this year, uses a similar technology called Phase Fresnel.) Whatever their moniker, smaller, sharper lenses will appeal to anyone trying to cram long lenses into overhead compartments or shoot with them for hours in the field. Ultimately, Canon’s EF 400mm f/4 DO IS II is an upgrade in just about every possible way.

Image Stabilization Rated up to 4 stops