When it comes to making photos, presidents and photographers have very different agendas. Presidents (as do all politicians) seek to... 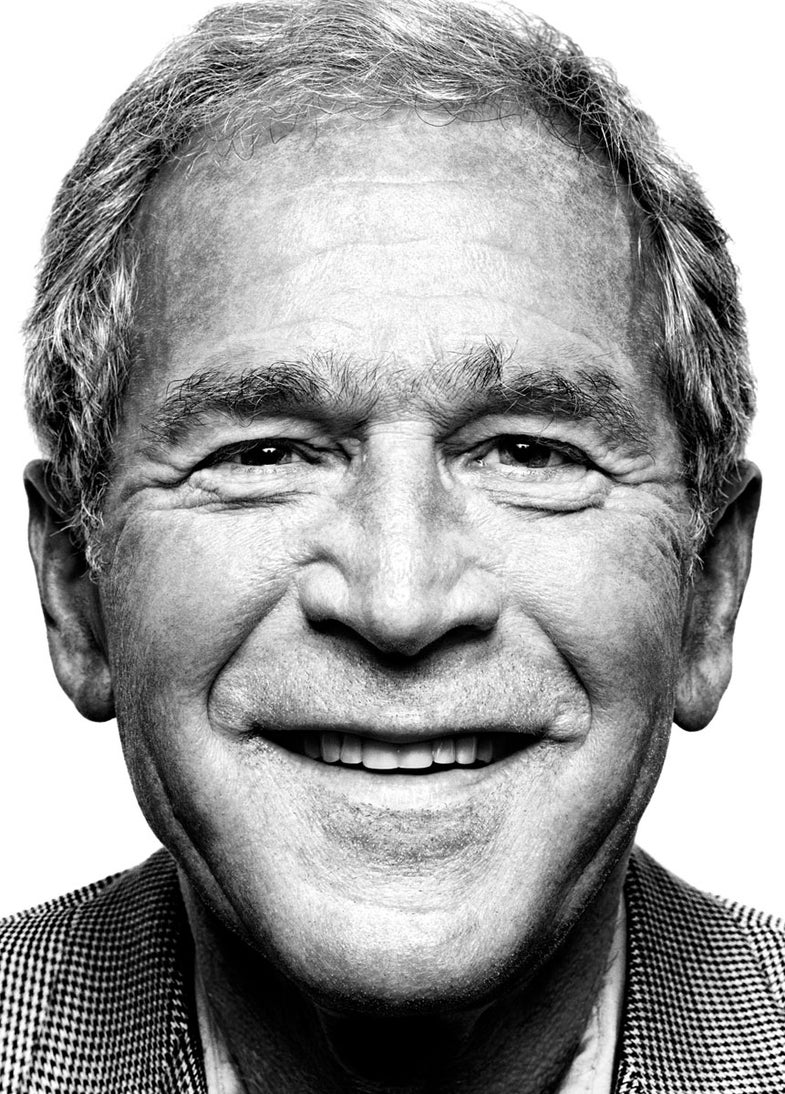 When it comes to making photos, presidents and photographers have very different agendas. Presidents (as do all politicians) seek to buff their carefully constructed images of themselves. Photographers, meanwhile, push in the opposite direction, doing their best to get at whatever scraps of truth might remain in the liminal space where the personal meets the political. At their best, pictures of our commanders in chief crash through the choreography to show us something real—good or bad—about the people we elect to the highest office in the land. As the 2012 election nears, it’s instructive to examine the work of five masters to learn how sharp-eyed photography and strong-willed photographers can strip away their practiced subjects’ finely honed veneers.

“You expect the president to behave like the brand,” says Platon. “I always try to find something more.” Though he usually gets less than an hour with each of his subjects, the British photographer says that’s just enough time. “I am extremely observant for the moments that I am there, but it’s a level of concentration that I cannot sustain,” he says. “I go in with no preconceived ideas; I bring the backdrop and they bring the drama.”

Jimmy Carter showed up wearing jeans and a work shirt. “I told him he looks more like James Dean than a president and asked him how he would look as Jett Rink [Dean’s character] in the film Giant. He put his thumbs in his jeans pocket and looked like James Dean. Carter is a cowboy at heart.”

George W. Bush insisted that Platon not depict him with a snarl. Platon believes that Bush wound up getting immortalized with the equivalent of a mask that speaks volumes. He suggests checking W.’s eyes to see what’s really going on.

During his session with Bush Sr., Platon found a reflective moment when the former president sat down in his favorite chair. Looking into the lens of a simple Leica, Bush sank into the chair and suddenly showed the qualities of somebody much younger and much smaller.

Most famously, Platon photographed Bill Clinton in a pose that some felt was too revealing. This was his first Esquire cover, and Platon initially followed the brief he’d been given, making staid headshots. “I spent seven and a half minutes giving the Esquire editors what they wanted,” he recalls. “Then, in the last 30 seconds, I told myself, ‘Here is where you become Platon.’ I put on the wide-angle lens and shouted, ‘Mr. President! Can you show me the love?’ One of Clinton’s people said, ‘No way show the love.’ Clinton replied, ‘Shut up. Shut up. I know what he means.’ He put his hands on his knees and gave me the Clinton magic.” The image is one of Esquire’s iconic covers, but Platon thinks most people miss the image’s point. “Everybody saw that photo as sex. I see it as charisma.”

One of photojournalism’s most iconic figures, Harry Benson learned his trade amid the sharp elbows of Fleet Street in the 1960s, and he admits he’s snagged some of his best shots by being selectively pushy. “I got close to presidents because the only thing on my mind was getting close,” he says. Never one to be intimidated, Benson put his own spin on his session with George W. Bush. “In the pictures I’d seen of him, he appeared soft. But when I met him he was like a middleweight boxer, looking at you but not looking at you. I photographed him the way I saw him.”

He did the same with Jimmy Carter the morning after Americans were taken hostage in Iran on November 4, 1979. “I asked if he ever looks out the window,” Benson says. “He said he had been looking out the window a lot that day.” The setup turned out to be prophetic: “Everything looked dark and awful through the viewfinder. You see Jimmy Carter’s face, and it’s not a happy one.”

Few presidential faces have looked unhappier than Richard M. Nixon’s when he announced his resignation. While most photographers aimed at the sinking politician, Benson focused on his family. “I knew that Pat Nixon was emotional, and I set myself at an angle where I could get her looking at him,” Benson says. “I knew this would be just one shot, one moment; I watched her like my dog waiting for dinner.” He hesitates for a beat, reflecting on the award-winning picture he made as soon as Pat Nixon betrayed her emotions, revealing everything about the fragility of both family and power. Then Benson softly understates, “It’s not a flattering picture of the president or Mrs. Nixon.”

As a general assignment shooter for Life magazine in 1966, Bill Eppridge received a call that would have thrilled any photographer. After years of negotiating with the White House, Life had managed to get access to Air Force One. As far as Eppridge knew, besides staff, he was the first photojournalist to take photos on the president’s jet.

In a further stroke of luck, LBJ’s official White House photographer (the legendary Yoichi Okamoto) had been an instructor of Eppridge’s at the Missouri Photo Workshop. He quickly brought Eppridge up to speed. “Oke told me that Lyndon Johnson was adamant about one thing: He wanted to be photographed from his left side,” recalls Eppridge, who warmed up by booking a few surreptitious shots of Bobby Kennedy smoking a cigar on the flight. “Oke was correct about Johnson. He was meeting with members of Congress in his office on the plane, and he immediately gave us the left side of his face. When we went around to shoot from the other direction, he quickly turned to give us the left side again.”

It wasn’t the last time that Eppridge would be in a position to photograph RFK. In 1966 he made an eerie picture of Robert F. Kennedy in the shadow of a poster that depicted the face of his assassinated brother. Two years later, he captured the tragic chaos in the kitchen of L.A.’s Ambassador Hotel after the younger Kennedy was shot. But Eppridge’s favorite image of Johnson and RFK was one he took at a ceremony for the Verrazano-Narrows Bridge in New York City. “Bobby and LBJ disliked one another intensely, and Life told me to be on the lookout for a moment in which that disdain was expressed,” says Eppridge. “In this photo you can feel the animosity in Bobby’s face. It’s a single frame that shows their relationship.”

When David Hume Kennerly was offered the job of official White House photographer to Gerald Ford, he nearly turned it down; it wasn’t worth giving up his gig at Time magazine. Only after Ford agreed to give the Pulitzer Prize–winning shooter complete access, with the president himself as Kennerly’s direct superior, was he willing to accept the post. “I didn’t want somebody telling me when I could go in and out,” says Kennerly. As a result of his negotiations, Kennerly got top-secret clearance that allowed him to capture intimate moments such as an early-morning meeting at the Akasaka Palace in Japan. Everybody’s wearing a jacket or tie except the president, who is still in his pajamas. “It shows that he was comfortable with me being there,” says Kennerly, “and was comfortable in his own skin.”

Perhaps Ford was impressed by how adroitly Kennerly captured his White House predecessor. In one image, made during Watergate but before the full weight of the scandal hit home, he captured Richard M. Nixon playing the piano at the Grand Ole Opry. “This may have been the last lighthearted moment in the Nixon presidency,” says Kennerly. “Four and a half months later, he resigned.”

Kennerly’s longstanding political connections got him in deep with the George W. Bush camp on election night in 2000. After Bush called Cheney to say he’d won, Kennerly accompanied the Cheneys to the Governor’s Mansion in Austin to cover the party. The putative celebration quickly turned into a tense ordeal when the now-infamous Florida tally snarled the outcome. “That was when the other photographers were told to leave,” says Kennerly, “but since I was there with Cheney and had always been part of the scenery, nobody paid attention to me and I was allowed to stay.”

In these days of extreme image control, it’s easy to imagine that a chief official White House photographer does little more than shoot an endless stream of choreographed photo ops. But that is not how Pete Souza operates. “I shoot the way I would on an editorial assignment,” says Souza, formerly of the Chicago Tribune, who met Barack Obama in 2005 while shooting a series on his first year in the senate. “Look at our Flickr stream. I doubt you will see an administration that has released this many behind-the-scenes pictures. I operate with a small footprint and visually document everything President Obama does.”

Souza also served under Michael Evans, chief White House photographer during Reagan’s administration. “In my 50s I approach this job differently,” he says. “I came from a newspaper, and it took time to realize that I am shooting for an archive that will hopefully live for an infinite number of years.”

That means capturing the intimacy of many major moments. Souza recalls a photo that freezes Obama looking at himself in the mirror on inauguration day. “It’s an interesting picture, considering the circumstances,” he says. “But he was just checking to see if his tie was straight. People will read different things into it because he is the president, but it is a human moment.”

Arguably, Souza’s biggest small moment of his current stint came when a departing staffer’s son, after posing for a family photo with Obama, was told he could ask the president a question. He asked if Obama’s hair was like his. The president told him to feel for himself. “It happened so quickly that I didn’t have time to get the best composition,” he admits. “I got just that one frame.” Had Souza missed it, would his status have allowed him to request a photo-op replay? Ever the journalist, his response is swift: “Shame on you for even suggesting that.”