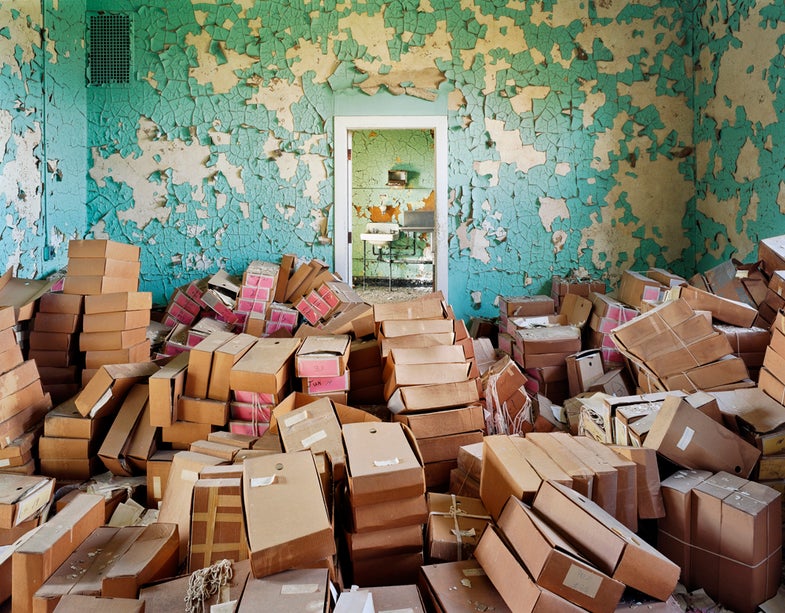 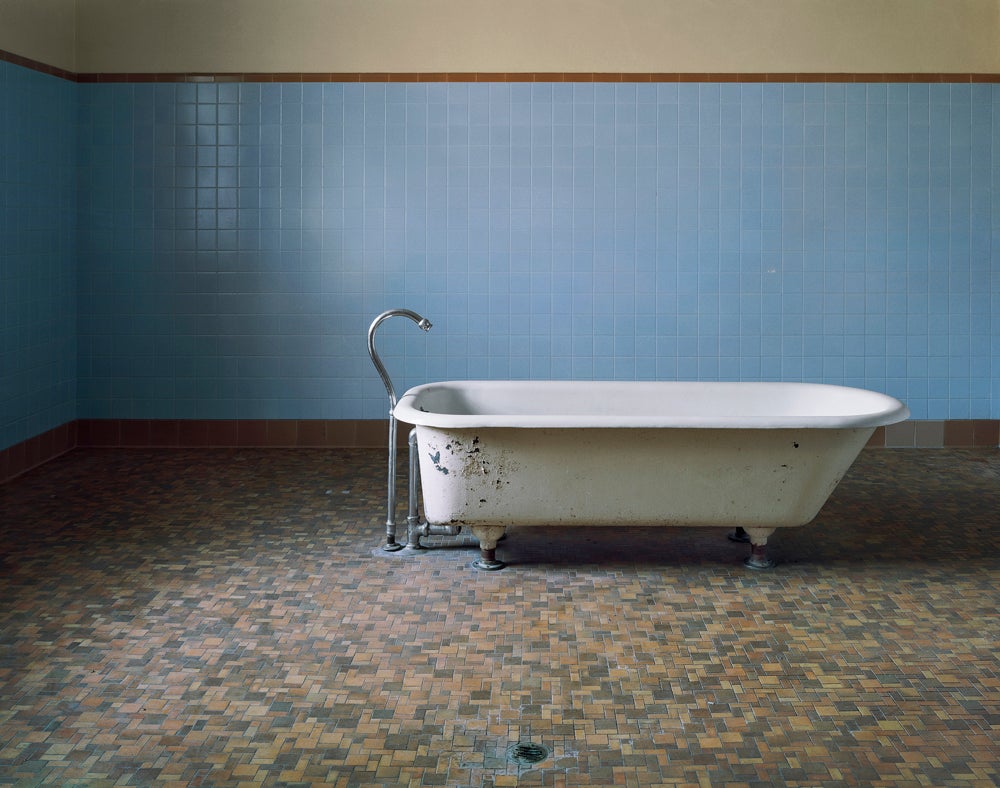 “There’s only a single tub in the entire room. It has no controls. They were located on a nearby wall so that patients couldn’t adjust temperature or water flow. There’s a beautiful simplicity to the scene, and the tub has a sculptural feel. The room is well-constructed —the tile is in perfect condition after decades of use. The space is clean and clinically functional, with a very carefully designed layout. This approach and this look of logical design is very common in the mental institutions of the period. The illumination is ambient light that pours through large windows and doors, both beautiful and practical.” 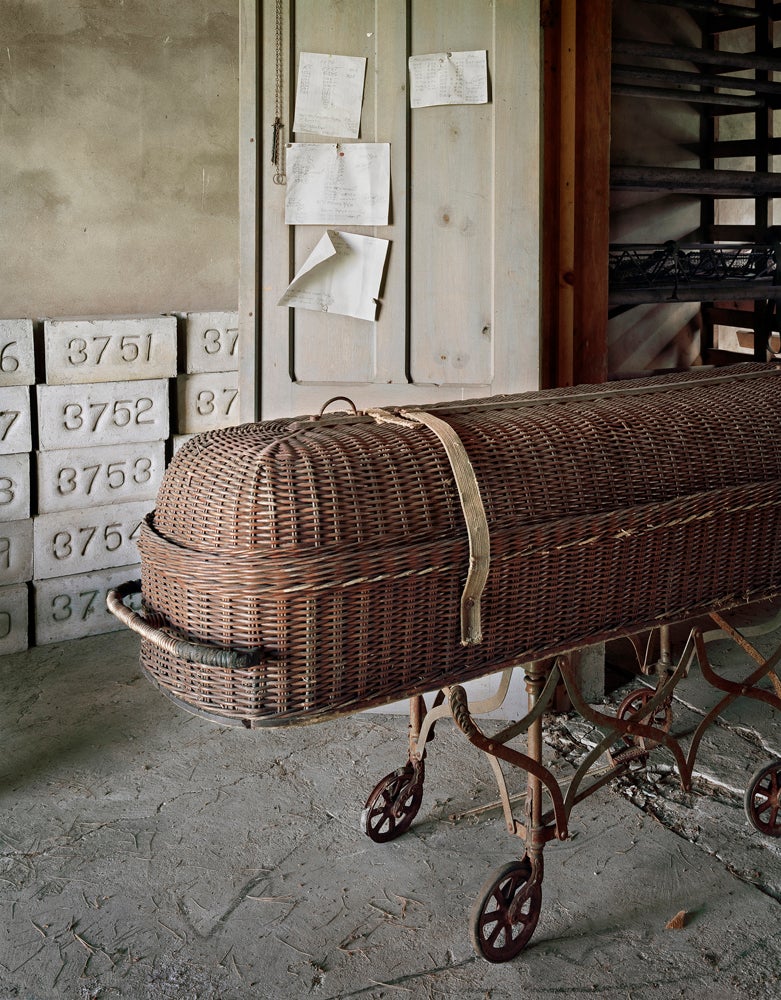 “Hospital staff used this wicker casket to transport bodies from the hospital to the facility’s vast cemetery. This unheated storage room in a cinderblock outbuilding is where the deceased were placed on stretchers during the winter months when the ground froze and the digging of graves was put on hold. In the background are unused grave markers. None of the cemeteries in the institutions that I visited had traditional headstones with patients’ names. Only numbers. The cemetery layouts were often organized by religion: Roman Catholic, Protestant, and Jewish.” 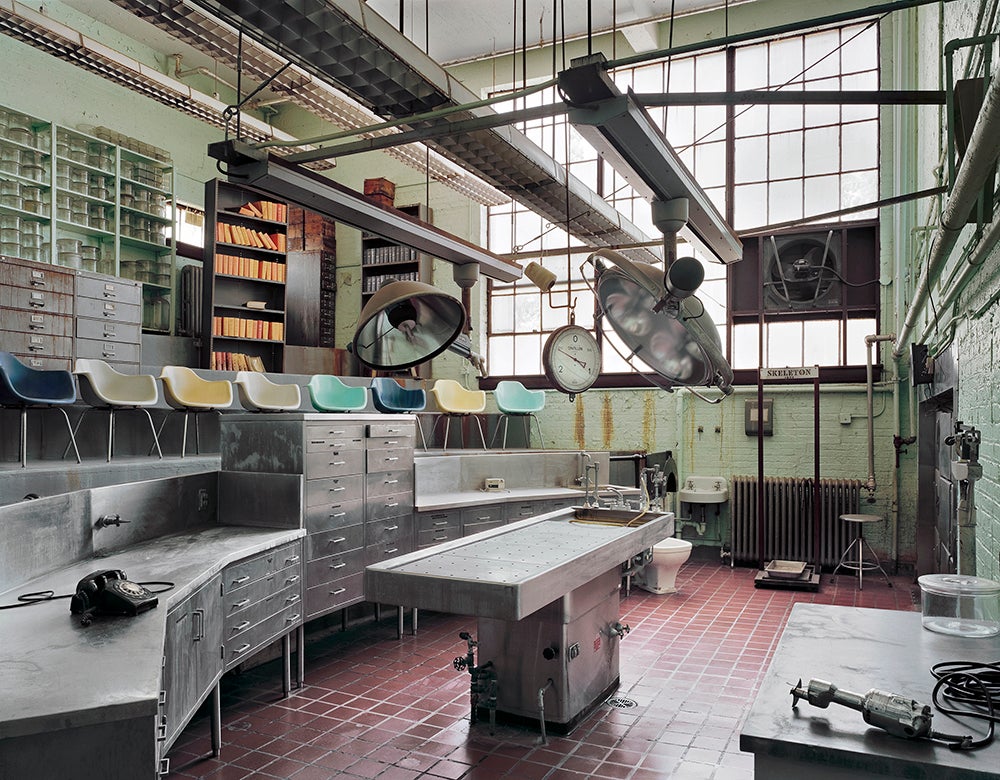 “This is my favorite space of the many that I photographed. It’s an autopsy theater and morgue located in an isolated area in the building’s basement. It was in perfect condition, because the upper floors of the building were still in use so the basement was heated. One advantage to gaining permission to photograph these spaces, is that you’re often accompanied by a guide who really knows the place. When he or she has worked there for 30 years, they often love to show you the facility’s hidden treasures.” 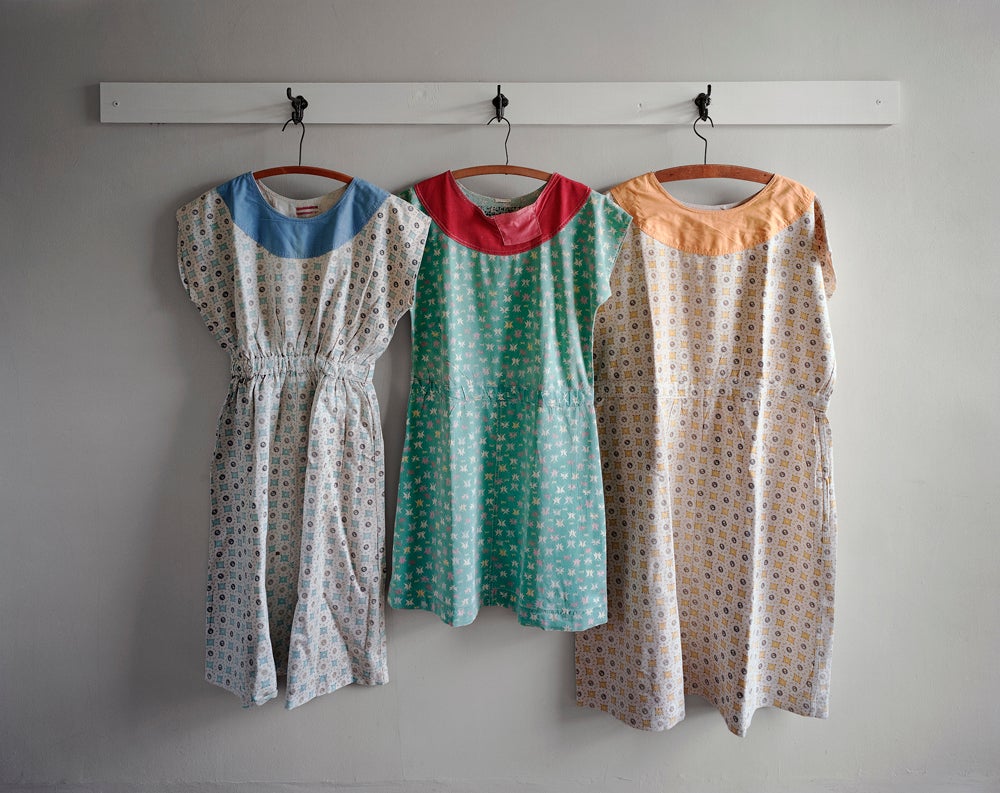 “This shot means a lot to me. I first saw these dresses in a 2004. They were in a hospital museum, and I didn’t really notice them. Later, I DID notice them in a pile in the background of one of my snapshots of the location, and realized that they told a story. The dresses were made by patients on the grounds and worn by other patients. There’s something very simplistic, beautiful, even elegant about them. I drove back 1500 miles from Brooklyn to Iowa to take this photo. It took a while to get them into a state where they looked like dresses, but it was worth the effort—and the drive.” 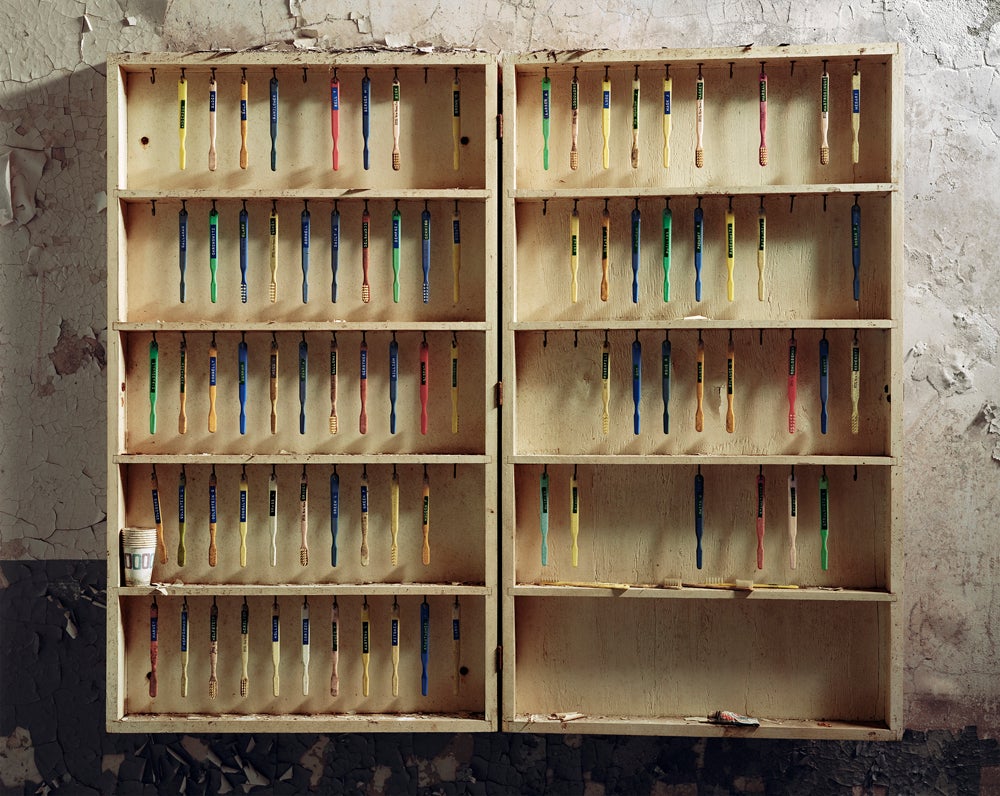 “My tour of the Hudson River facility was given by a locksmith who had keys to every room, closet and cupboard. By the end of the shoot, I thought I’d seen everything, but some time later, I found a photo online of these toothbrushes that had been taken by a friend. He told me that the toothbrushes were located in a back ward of a back ward, way off the beaten path, hidden deep within the hospital. I returned and after some searching, I found them. It was like unearthing a treasure. To find something so perfectly intact from decades ago, it just doesn’t happen. It felt like finding a perfectly preserved time capsule.” 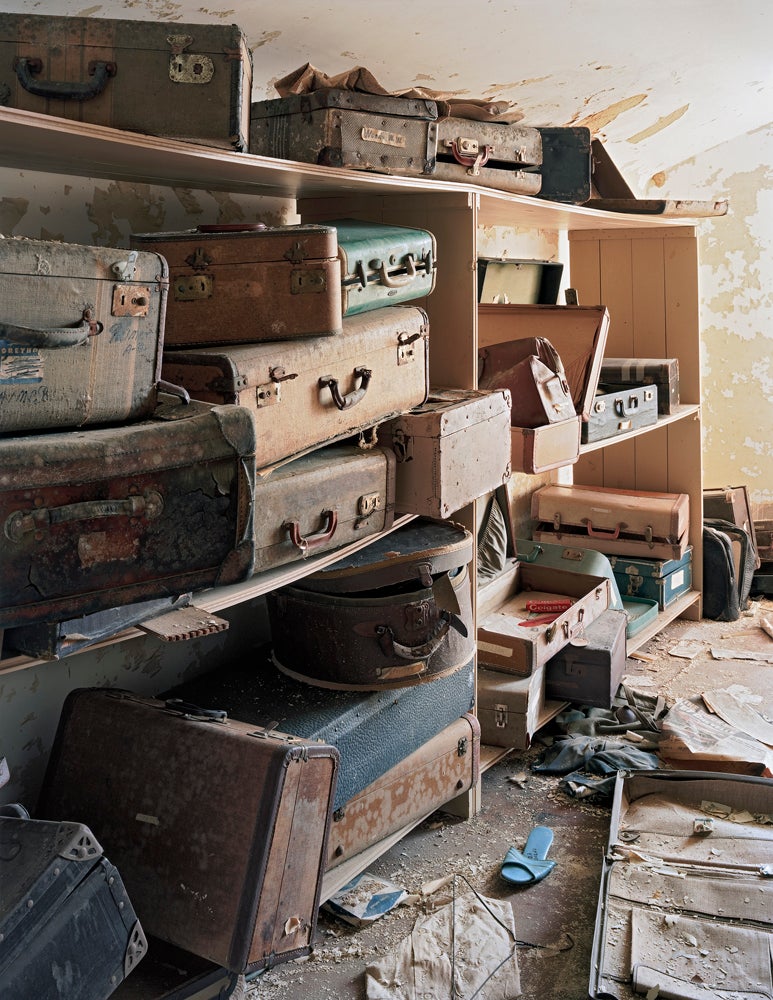 “This scene exists at nearly every hospital, and so it resonates with me, almost in an iconic way. Patients would check into the hospital with their belongings and the suitcases would be stored in an attic and often forgotten. It’s like they’re patiently waiting to be retrieved by their owners. Like the other pictures here, it was made with 4×5 Horseman monorail camera on Kodak Portra 400 color negative film. Also like the others, it was printed by Griffin Editions in Brooklyn.” 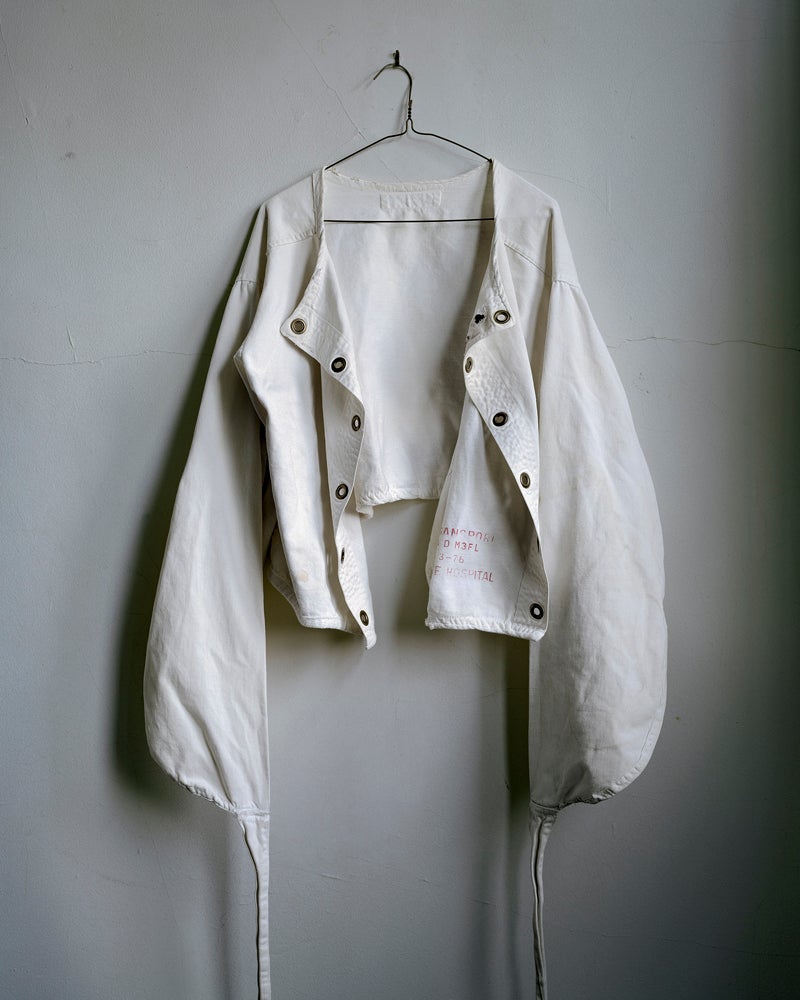 “This is the cover of Asylum. When I started the project, I was focusing on the architecture, largely because my background is in architecture. I wasn’t as interested in the human details of the hospitals, because the buildings were so impressive. But later on in the project, I felt more drawn to the human artifacts. Some of the hospitals had museums of stockpiled objects, instruments, and personal artifacts that were part of the daily life in these hospitals. My eye became drawn to them. I found this straightjacket, and it seemed particularly representative of all that I had seen over the years. It looked like a restraint device, but it’s also a beautifully designed garment. I spent a lot of time styling the thing. I wanted it to look elegant, and not like a disused or distressed garment. It’s a shot that looks like it might have been easy to take, but like most easy things, it wasn’t.” 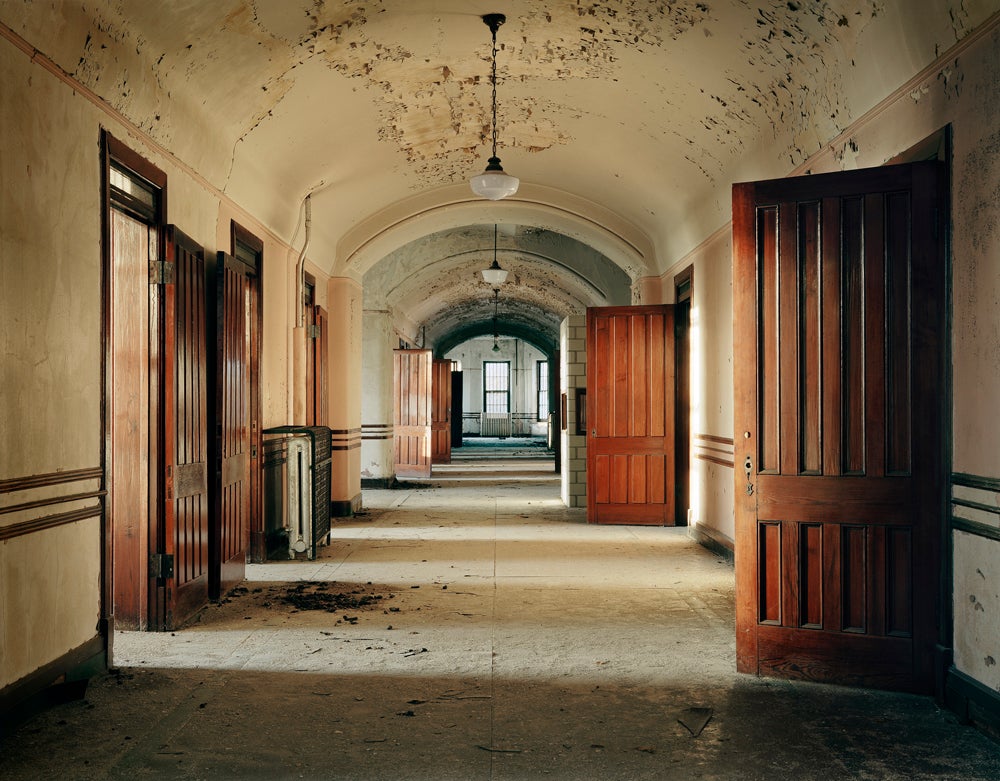 “This ward has been abandoned for probably forty years or more. I found that even the hospitals that were still in use often had wings or floors that had been effectively abandoned, often for decades. You could be standing in a busy hallway, and there would be a locked door, and behind it could be an large, unheated, vacant, and crumbling space, untouched for decades. That was the case with the upper ward in this otherwise busy hospital. Its curved roof and very wide, thick doors with beautiful woodwork were very evocative of a different time. It reminded me of a resort. The end-of-day lighting was soft and inviting. Typically when I arrived at a hospital, I would look for a long ward like this. It would be the first shot that I would take, just to get the juices flowing and my head in the space.”

Christopher Payne, a Manhattan-based, formally trained architect-turned-photographer, began his project of visiting and photographing over 70 American abandoned state mental hospitals well over ten years ago. The resulting book—Asylum: Inside the Closed World of State Mental Hospitals (The MIT Press; 2009) with supporting text by well-known neurologist Oliver Sacks—is now in its fifth printing and a second edition with new images and sequencing is being discussed.

In the intervening years, the project has gained momentum and interest. Its most powerful images have been featured in gallery and museum exhibitions around the world and it’s currently on view at Manhattan’s Benrubi Gallery through March 26. What accounts for the project’s “legs?” Seen together, the images deliver a poignant mix of formal beauty, classically inspired architecture, and themes reverberating on social, political, and personal levels.

“It’s amazing how grand, even palatial, the architecture in these structures from the late 19th and early 20th century was,” says Payne. “It represented ideals from another, more optimistic era, when beautiful buildings and surroundings were thought to have a healing effect and to be able to impact emotions and behavior in positive ways.” Payne’s photos capture both the grandeur and the curative nature of these spaces. His eye also locates visible undertones of the personal tragedies—and triumphs—that took place within the building’s walls.

Payne agreed to a gallery walk through the Benrubi show; his comments on the individual images serve as captions.