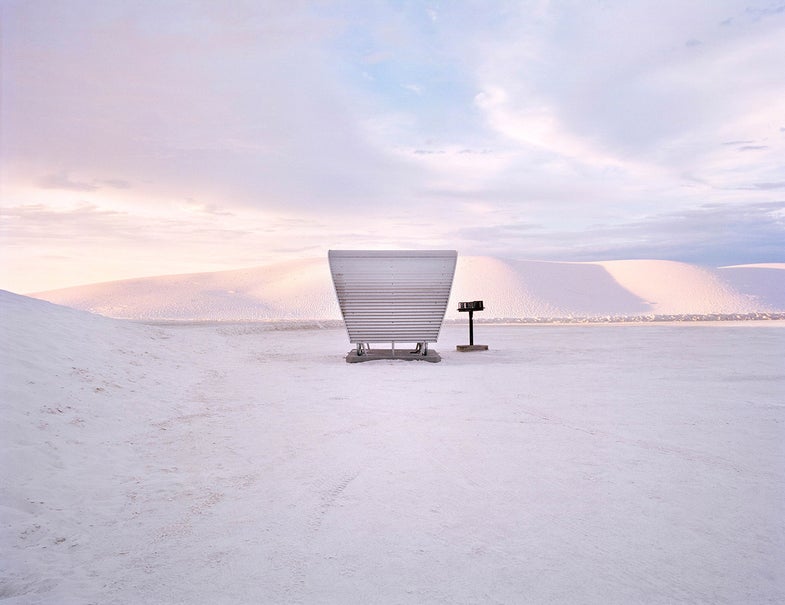 Serving as dwindling remnants of a lost chapter of Americana art and the culture of the road, some lone freestanding rest stops still remain untouched, nestled on the outskirts of major highways. Upon hearing that these architectural gems were being slowly and consistently demolished, photographer Ryann Ford sprang into action to catalogue them before they vanish into rubble.

The Last Stop series was an idea born out of genuine intrigue and Ford’s fondness for architecture. “I’ve always had a strong eye towards minimalism,” says Ford. “I think that when I drove Route 66 all the way from California to Austin I’d seen some rest stops along the way, so that’s when it probably entered my subconscious.”

Ford is a Southern California transplant currently living in Austin, Texas, and working as a freelance architectural and interiors photographer. She has been shooting since she was a curious 12-year-old playing with her father’s camera, and now, at 34, she holds a degree in photography from Brooks Institute, from which she graduated in 2003.

The idea of focusing a photographic series on rest stops and Americana art was solidified when Ford began exploring Austin while out on freelance assignments in 2009. “When I took small back roads to jobs, that’s when the idea really hit home for me,” she remembers. “I started researching and found a ton of news articles about demolishing these little state-owned stops. That’s when I kicked the project into high gear.”

Realizing she had stumbled upon a subject often overlooked yet visually salient, Ford decided to compile and edit her shots into a book about Americana art.. Through a Kickstarter campaign formed in 2014, she raised the funds needed to make that vision a reality: The Last Stop: Vanishing Relics of the American Roadside. Ford has shot about 400 rest stops, but only 100 will be published in the the book, which is due out this month from powerHouse Books.