Earlier this year, Paul Hansen’s shot of a funeral procession in Palestine was selected as the World Press Photo winner.... 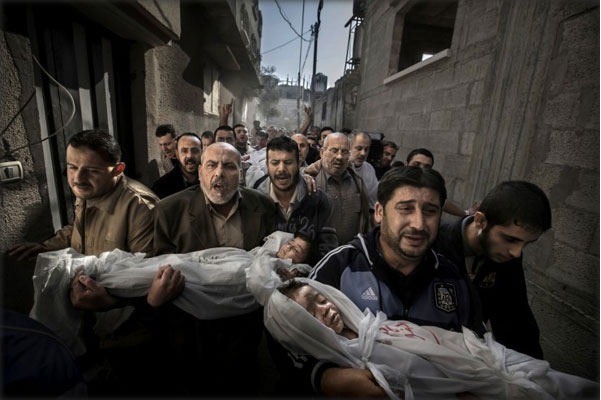 Earlier this year, Paul Hansen’s shot of a funeral procession in Palestine was selected as the World Press Photo winner. Almost immediately, controversy sprang up online with people claiming that the image was “faked with Photoshop.” Since then, things had calmed down a bit. The prize was not revoked and the image was never proven to be subject to excessive manipulation.

This morning, however, things bubbled back up to the surface and World Press Photo set a few experts on the case to decide once and for all if the image was a composite. The verdict came back in favor of Hansen.

In order to get the dynamic range desired in the photo, he claims to have stacked the same file three times, processed differently each time. As he says, it’s a process you could actually do with negatives during scanning. There was no splicing involved.

Here’s the money piece of the announcement from Eduard de Kam, an expert in the Netherlands:

“When I compare the RAW file with the prizewinning version I can indeed see that there has been a fair amount of post-production, in the sense that some areas have been made lighter and others darker. But regarding the positions of each pixel, all of them are exactly in the same place in the JPEG (the prizewinning image) as they are in the RAW file. I would therefore rule out any question of a composite image.”

Some would consider that a type of HDR, but the objective here was to recreate what the eye sees. To some, that still might seem like cheating, but ultimately, it’s not an uncommon technique and it doesn’t change the tone, meaning, or message of the photograph. If he had been there with a camera with a super-wide dynamic range like one of Phase One’s 13-stop IQ backs, he would have had to do even less processing to keep things in line.

The length of this whole controversy seems pretty impressive. Once an image is branded a fake, even if the suggestion is incorrect, it seems to become pervasive. In fact, I wouldn’t be surprised if today’s expert analysis were brought about by people constantly emailing them about it. In fact, if you search Google, you’re still very likely to find a whole pile of stories called, “How the World Press Photo Winner Was Faked With Photoshop.” A catch headline to be sure, but also a seemingly false one. It’s troubling.

The conversation about how much manipulation is too much will seemingly rage on forever, but this is the kind of thing that gets lost in the shuffle. All of those accusations are seen by people, then the story goes out of their mind. All that’s left is the inkling that the winner of the World Press Photo award this year was faked.