Amazing photos that marry the documentary with the romantic 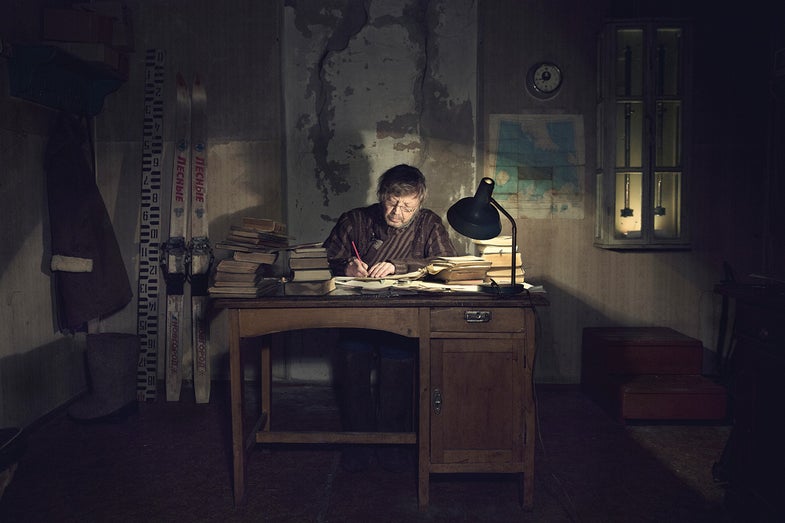 Slava in his office writes down the collected data in the journal after his observations on the meteorological field outside. Evgenia Arbugaeva
SHARE

“If you compared the genre of photography I work in to literature,” Evgenia Arbugaeva says, “it’s close to magical realism.” Raised in the Russian Arctic and currently residing in Paris, Arbugaeva, winner of this year’s Young Photographer Infinity Award from ICP, makes photographs that marry the documentary with the romantic.

Take, for example, her most recently completed series “Weather Man,” borne from one of her many visions for projects revolving around barren landscapes and solitary existences. It features Vyacheslav Korotki, who lived and worked far from civilization as a meteorologist in the Arctic outpost of Khodovarikha (he has since retired his post). Like the ethereal nature of his lifestyle, there’s a kind of phantasmagorical element to Arbugaeva’s inuitive process of finding him. “I knew this character existed somewhere in one of the Arctic outpost stations, so (in 2013) I went aboard an icebreaker ship that delivers supplies,” she says. “I was looking for this person and luckily he was there. Maybe it’s magic.”

With the help of Photo de Mer, a French grant program that funds photo projects about the sea, Arbugaeva completed “Weather Man” during two visits with Korotki. The portfolio was later published in The New Yorker. Of the experience, she says, “I thought it was quite beautiful…showing this work in the busiest and craziest city in the world…and then there’s this hermit. I liked the contrast.”

Arbugaeva doesn’t simply go out and document her subjects. Instead, she says, “I think about and study the (project’s) aesthetic so it’s in me when I enter the field. Intuitively, I start to lean toward a certain genre of painting, literature, and music. By the time I’m photographing, I’ve already soaked myself in the art that inspires the project.” For “Weather Man,” she looked at Russian and European oil paintings, taking in their “picturesque, dark mood and classic compositions,” she says. “And I listened to lots of cello.”

For all their beauty, photographing in these places can be grueling, and sometimes even dangerous. For the series “Mammoth Hunters,” which was published in the April 2013 issue of National Geographic—another impressive credit for the 30-year-old photographer—Arbugaeva ventured back to her home region to document a community of people who search for valuable mammoth tusks on the mostly uninhabited Kotelnyy Island. The trip, she says, “changed me not only as a photographer, but also as a person.” It was here, with the help of her brother who was assisting her on the shoot and a doctor they called on a satellite phone, she sewed 12 stitches into a man’s hand after he was badly injured by a boat propeller. It was a feat she had never imagined having the courage to do. “I started to be more patient,” she says of how the voyage changed her. “With this climate and this location, nothing depends on you alone; you are fully dependent on weather and on other people and the impression you make on them. Your life depends on others.”

For all her success, Arbugaeva is not unfamiliar, however, with the struggles of the emerging photographer. “I know it can be very hard for young photographers to get work these days,” she notes. Having great work and putting herself out there was key. “With National Geographic, for example, I met an editor at a portfolio review and I showed the project to her and she really liked it. They commissioned me to finish it.”

She also notes that having an unusual idea can catch the attention of would-be clients and help garner photographic honors, such as her inclusion in PDN’s 30 New and Emerging Photographers to Watch in 2013 and a Bright Spark award in Magenta Foundation’s 10th Flash Forward competition. “The topics that I’m working on are hard to get access to and are something people haven’t seen before, so it’s easier to get assignments and get published,” she explains. “The Russian Arctic is a kind of blank spot on the map, especially for Western people—there isn’t really much information coming out of this region. I think I’ve been lucky with that.”

But luck isn’t the half of it. Arbugaeva has traveled far toward her goal of becoming a photographer. She lived in the small town of Tiksi in the Russian Arctic until she was 8 years old, and then her family moved to Yakutsk, Siberia, “the coldest city on the planet,” she says, where she lived until age 16 and her parents still live. “I was lucky to be born there,” she says. Because there’s not really much happening in the town, I learned to be excited by colors and shapes. It’s always snowing. And in the tundra there are no trees; it’s a vast space, so everyone who appears in this context becomes interesting and worth studying. I think this has influenced me as a photographer.” In 2010 and 2011 she returned to Tiksi, which became the subject of her first dreamlike series and several accolades: a Magnum Foundation Emergency Fund grant; the 2013 Leica Oskar Barnack Award; and publication on The New York Times Lens Blog and in the French newspaper and its magazine Le Monde.

Arbugaeva is also fortunate to have parents who encouraged her to travel and who exposed her to photographic adventures. “My dad (a former biology teacher) was always showing me films of lions in Africa or Jacques Cousteau’s underwater series,” she explains. “He was telling me in such bright colors what it would be like to travel. Some of us fulfill our parents’ dreams, and I’m happy that my dad’s dream and my dream matched.”

Arbugaeva was first exposed to photography as a profession when she was 15, during an exchange program in Connecticut. A teacher showed her a catalog of colleges that teach photography, along with books by Mary Ellen Mark and Richard Avedon. “I was like, ‘You can go to college for photography?’ It was a revelation. In Russia at that time, no parent wanted their kid to be a photographer. It almost didn’t exist as a profession.” She ended up going to college for Art Management in Moscow before deciding to revisit her interest in photography in 2009, completing a one-year Photojournalism and Documentary Photography certificate program at the International Center of Photography in New York City. There she made the series “Forever Beautiful,” documenting aging women whose main career asset was their beauty. “It was a life-changing experience for me because I hadn’t studied art or photography before. It sort of flipped my world upside-down,” she says of the program.

She explains, however, that it was difficult to remain in New York City. “After school I was struggling,” she says. “In New York there is so much great art. I was overwhelmed by it.” Two years ago, she decided to move to Paris for its “creative scene and location,” which makes it easier for her to travel to Russia for her projects and to visit family.

Now, in addition to traveling to Russia for two assignments she’s currently working on for National Geographic, she’s decided to temper the arctic cold with a personal project in Tanzania. There she’s working with an anthropologist from Cambridge University to create a fictional story about actual abandoned science stations leftover from British colonial times. “The character [I’ve created for] the story is an older Tanzanian man who used to work for a famous British scientist. Once the station was abandoned he didn’t have a job. But he still comes to the lab, and he cleans the floor and he keeps the lab mice, and he still collects the precious insects and puts them into a collection.” This series reflects her interest in people who create their own worlds, who, she says, “are alone in their own universe but are not lonely. It’s like a world within a world within a world within a world.”

She admits that it can be easy to lose herself within these worlds. “Sometimes I go and photograph other people’s lives—jumping from one person’s life to another person’s life—and I start to question: What is my life?” She says the key to not burning out is to keep some separation between life and work. “I think it’s important to leave free time—not only for hobbies, planning, and daydreaming, but also simply to do nothing.” Above all, her love for her art still shines.

“Photography used to be my hobby,” she says. “But now it’s my everything.”