Eric Kruszewski: Behind the Ferris Wheel

My passion for photography and my fascination with carnivals evolved together. In 2011 I was living in Richland, Washington, and... 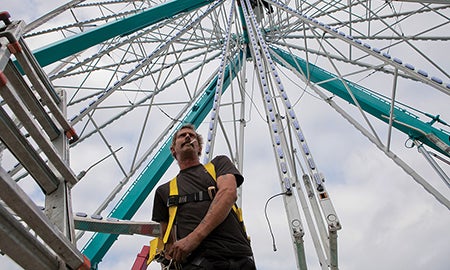 My passion for photography and my fascination with carnivals evolved together. In 2011 I was living in Richland, Washington, and working full-time as a mechanical engineer. At the time, I was shooting images and had been thinking about making a career change from engineer to photographer.

One weekend, some buddies and I attended the local county fair, which included a rodeo, demolition derby, and traveling carnival. One of my friends knew the carnival owners, who live in Nevada and travel throughout the Pacific Northwest during the summer months. While wandering the carnival grounds I was astonished that so many games and rides would be transported, erected, operated, and disassembled—just in time to do it all over again. My friend introduced me to the family of owners, and our talk further piqued my curiosity: Who are the people who put on this show?

I kept in touch with the family. I met them for lunch and later went with them to a carnival convention. One evening they got an award for years of service and I photographed the event. They liked my pictures, and more important, we became friends. I got to know them not just as carnies but as fathers, mothers, husbands, wives—down-to-earth folks. Eventually I asked if I could travel with their carnival and photograph life behind the Ferris wheel.

They accepted my offer and we began planning logistics. To tell the story adequately, I wanted to travel with the carnival for a long time. So in March 2012 I ditched my engineering job and started to make arrangements. This carnival travels from Memorial Day to Labor Day. I joined them in June and stayed until early September.

I sold my car, so I had no personal transportation. I wanted to follow the caravan of carnival workers from place to place, and the best way to do that was to drive one of their pick-up trucks. Each truck is hitched to some type of small carnival equipment—ticket booths, food stalls, small games, etc. Most of the time, I pulled the Ice Cream Parlor to the next location.

Over three months, we traveled throughout Washington and Oregon, each week moving to a new town: Yelm, Oak Harbor, Lynden, Ellensburg, Bremerton, Rainier, St. Helens, Astoria, Hermiston. Many crew members travel as families. The parents can work, and the children can play with other carnival children since they’re out of school.

The carnival workers are people like you and me; their lifestyle is different. Some left great opportunities to have a different experience, while others left tough life situations and needed a new outlet. One ride operator used to be a top chef at a five-star Vegas restaurant. He wanted to reduce the stress in his life so he joined the carnival. Another guy was a total gearhead—he owned a garage in San Francisco where he modified and rebuilt drag- race cars. He liked dealing with rides and mechanics more than dealing with other people.

The work is intense, and it’s amazing how much effort is involved. A typical carnival will operate from Tuesday afternoon to Sunday evening. That gives them part of Sunday, all of Monday, and Tuesday morning to disassemble, transport (sometimes 30 miles, sometimes 300), reassemble, test gear, and be ready for the next crowd.

There were about 80 people who traveled with this carnival, and not all of them accepted me. Outside of the carnival grounds, the workers sleep and interact in a place nicknamed “The Boneyard”—an encampment of tents, campers, and RVs. It took me about six weeks of traveling before I was welcomed into that circle and allowed to photograph there.

Since I came into the carnival knowing the owners, some workers thought I was there to police them and capture them doing something wrong—for example, not wearing safety equipment. I had to convince them that this was not my intention. I wanted to show the real life of the carnival worker. Eventually most of those people were OK with me. It just took time. That said, many of the workers were very open to being photographed and having their stories heard.

When documenting any community, a photographer will come across people who love it and people who dislike it. I shot a separate photo series on rodeos, where I knew nobody; each time I had to work my way in and talk to new people and just blend. I’m currently working on a project within Baltimore’s steel mill community, another tight-knit group of folks who have a long-standing history of working in the industry.

My advice in these situations: Be honest with your intentions. Try to earn trust—this leads people to be themselves in front of you and your camera. And that’s when you can really see emotion, intimate moments, and regular life.