Alfred Eisenstaedt’s “V-J Day in Time Square” is one of the most iconic images of all time. Shot on August... 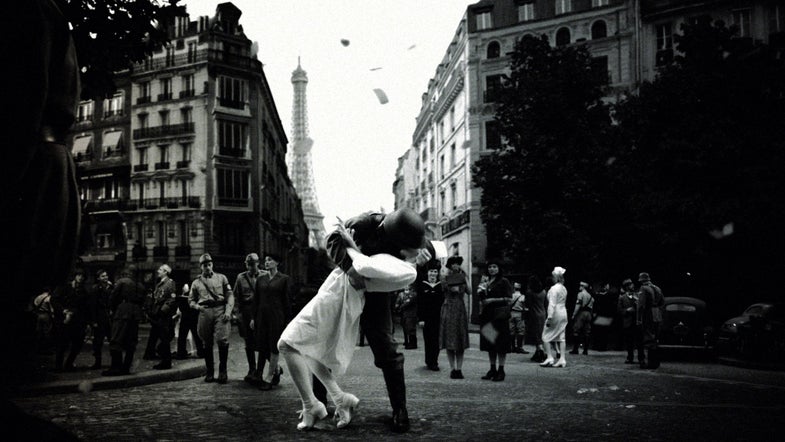 Alfred Eisenstaedt’s “V-J Day in Time Square” is one of the most iconic images of all time. Shot on August 14, 1945, it was published in Life Magazine and has stood as one of the most enduring images of World War II. Now, the photo is being evoked by a video game company in a trailer for their new game. Only this time, it’s a Nazi soldier planting a kiss on a woman in occupied Paris.

I first saw the image from the video game trailer when scrolling through Facebook. It was suggesting I “like” the page for Bethesda’s reboot of the famed Wolfenstein first-person shooter series. The connection was immediately made in my brain between the two images, which is seemingly the point.

The game is set in an alternate universe in which the Nazis had achieved their goal of world domination. Bethesda is using a rather familiar tactic used by game and film makers trying to establish an alternate history. By recreating famous imagery and switching the context, they’re able to help the viewer (or player, in this case) contextualize the setting.

Typically, I’m not a fan of that technique, but I understand its efficacy. But what makes this case especially sour is that Eisenstaedt, a Jew himself, left Germany in 1935 amidst a rising tide of anti-Semitism. He was also very protective over the image as a photographer, so while I can’t speculate about how he would feel seeing his image evoked in such a way (Eisenstaedt died in 1995 at the age of 96), certain seemingly-obvious conclusions do come to mind.

Legally speaking, the argument can likely be made that the work isn’t being infringed, and I’m certainly no expert in that field. But to me, what’s most troubling is the recreation’s suggestion that in this alternate Nazi-favoring universe, it was a bizarro Eisenstaedt himself who made this iconic image of a Nazi rather than a U.S. soldier. Considering the context, it just feels wrong. Very wrong.

There are other images in the trailer that recreate historic events with Nazis inserted. One recreates the cover of a Beatles album and another puts a Nazi saluting a swastika flag on the moon. Those images, though, seem to be presented more as parody. They’re not nearly as ominous as the kiss image. What do you think? Is the image fair game for use like this? Does it count as parody?