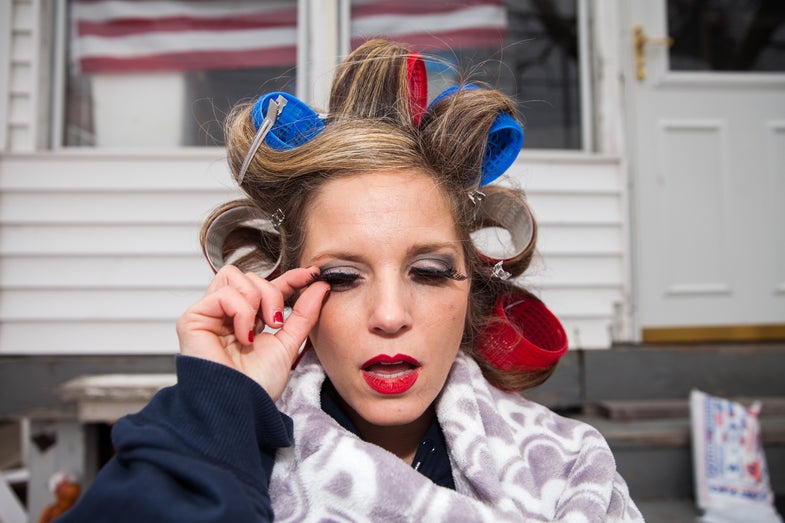 Di Camillo’s photography captures a side of the New York City that is usually ignored, but his often gritty depictions of people and places are full of earnestness and reverence. That duality is ever-present in Di Camillo’s photographs: photos that could be exploitative—direct flash street shots of the impoverished and destitute—come across a sympathetic and curious.

With his photography, Di Camillo gives exposure and respect to many of the downtrodden figures of New York City. By his own account, he is working to make up for some of the wrongs of his past life.

The son of a longshoreman, Di Camillo, 47, grew up in an archetypical New York household: close-knit, first-generation Italian parents living with extended family in Bensonhurst, once considered the “Little Italy” of Brooklyn. Di Camillo and his peers’ aspirations were influenced by their surroundings growing up—mostly blue-collar, union jobs, with a “darker element” of organized crime just out of sight.

“Today kids want to become engineers and physicists and all these beautiful professions,” Di Camillo says. “Back then it was just, I want to drive a brand new Mercedes and I’m okay to do what I got to do to do it.”

On account of his familial accent, Di Camillo says he was teased growing up and became a self-described outsider. His heritage led to a curiosity about the world outside of his neighborhood, which led him to photo magazines like TIME and National Geographic, discarded issues of which his father would collect from an old lady in the neighborhood.

But he never expected to become a photographer. His only pictures in those days were make believe. He would often use the family’s old Polaroid instant camera–without film–to terrorize his sisters by throwing open the bathroom door and pretending to take a photo.

That sense of ambush may still seem present in the body of work that Di Camillo has built up in a his few short years of shooting, but he says that getting photographs is about more than merely catching a shot.

Isolation led to trouble making, and Di Camillo eventually fell into what he refers to as the “darker element” of his neighborhood. “I started stealing car radios when other kids were playing with GI Joes for crying out loud,” he says. His first arrest was at the age of 12 and eventually Di Camillo made a name for himself as a thief.

In 2006, Di Camillo was arrested in connection with members of the Colombo crime family and initially faced a max sentence of 20 years in prison. He was sentenced to 36 months at the Petersburg, Virginia medium security prison, but was placed on house arrest for two years before he could start serving his sentence. He was released in June 2011.

“It was probably the best thing that ever happened to me. It gave me time to think about who I am,” says Di Camillo. “I wasn’t a villain. I wasn’t these things that I made up in my head—I was a loving guy, I care about people.”

House arrest gave Di Camillo time to reconnect with his family, and he started playing with photography—mostly macro photos of insects and plants, as he was required to stay within 100 feet of his home. After prison, the photography stuck.

“When I came out, I was able to walk around in the streets and my eyes were wide open,” he says. “I knew from being in prison that I could just pick up on things. You know, your antennas are all the way up.”

He also spent his years behind bars improving his aesthetic eye. He read what few photography magazines he could find in the prison library, but also studied things like Rembrandt lighting and the work of icons like Eddie Adams and Bruce Gilden—whom Di Camillo considers an influence.

“I thought he was a total fucking nut,” says Di Camillo of Gilden, regarding the Magnum photographer’s work and perseverance against the mainstream aesthetic. “His photographs, you want to call them ugly, I call them beautiful. I call them human.”

A quick look at Di Camillo’s work bears an immediate reminder to Gilden’s street photography, with frequent use of a direct flash seemingly capturing sudden, unguarded moments. Di Camillo goes to lengths, however, not to exploit his subjects. “I always give respect,” he says. “I hit a low—it taught me to be respectful and gentle and understanding with the subjects that I’m shooting.”