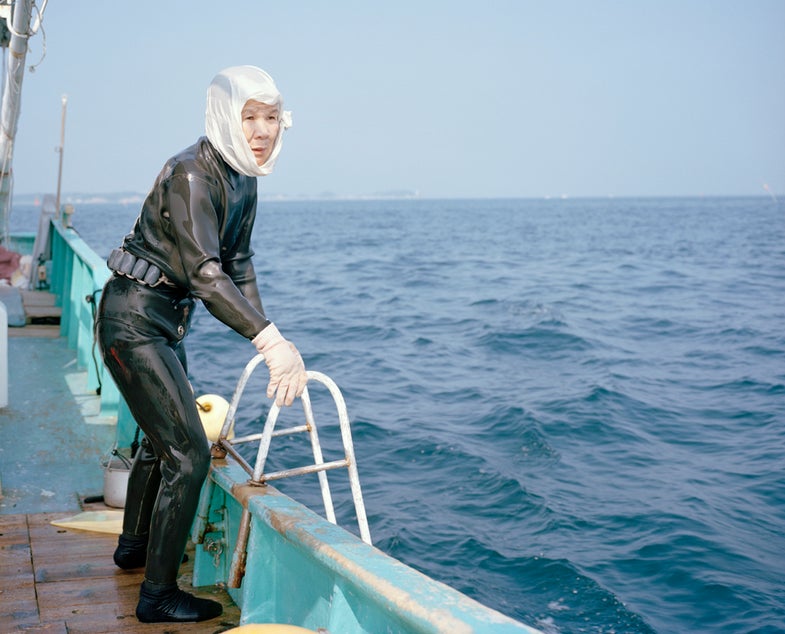 It might seem unlikely that a young German photographer would be the person to document a small island community of female abalone divers, but that’s exactly the story behind Nina Poppe’s photobook Ama. Poppe spent a significant amount of time with a single community of divers in Ise-shima, Japan; the book takes its title from the Japanese word for these divers, which literally means “sea woman.” The ama have been photographed before–there are some excellent black and white photographs of them from the 50s–but Poppe’s work takes a fresh look at their way of life. Her photographs are understated, with a clean sense of composition and a simple color palette dominated by the blues of the ocean and the sky. It’s an effective way to let the power of her subjects come through.

In a way, her photographs capture something of the lively, hard-bitten attitude towards life in Japan that Kazuyoshi Usui is trying to show through his work “Showa88.” Usui said that it’s hard to find this kind of attitude in contemporary Japan, and, in an extremely refreshing way, the women in these photographs are very much out of sync with their own time. Her book, published by Kehrer Verlag in Heidelberg, Germany, is itself a notable object: Dutch book designer and blogger Hester Keijser examined its material qualities in an earlier post.

“I heard one young Japanese woman say that the ama are in-between people, by which she meant they were between men and women,” Poppe told the Guardian in a recent interview. “The ama do not really fit in with contemporary notions of female sexuality in Japan. They are very much outsiders – but then, to a degree, they always have been.”