Devil For the Detail

Texas native Randal Ford is no stranger to photographic challenges. Choreographing rattlesnakes, rounding up cowboys, wrangling a movie icon—it’s all... 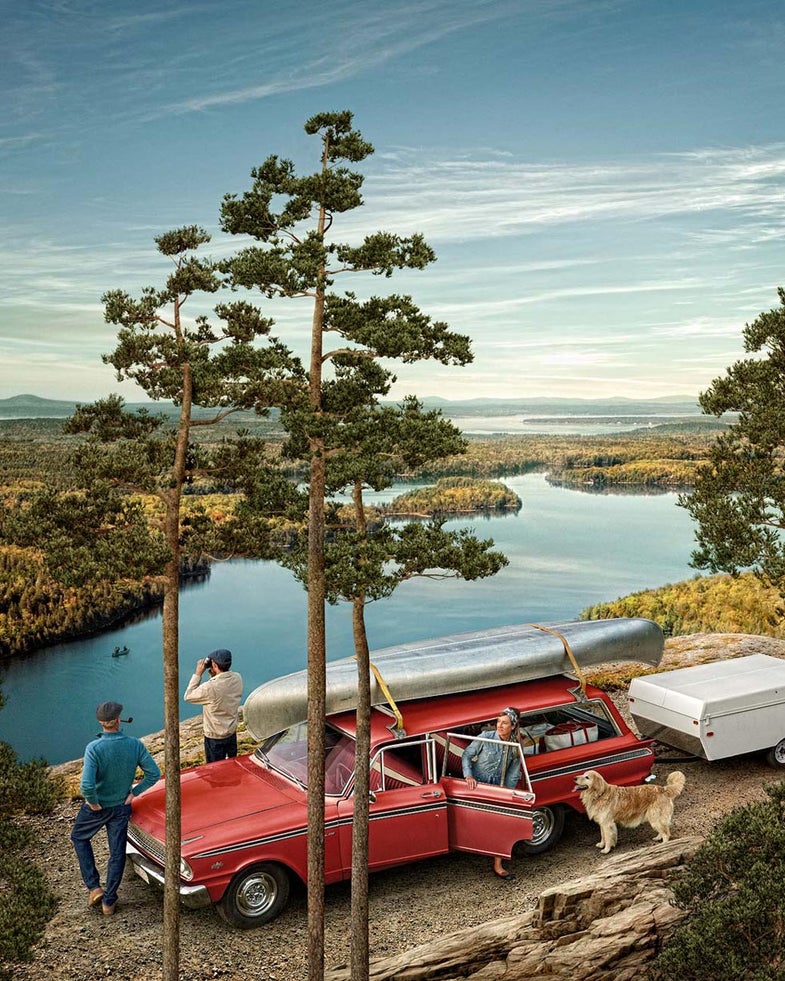 Texas native Randal Ford is no stranger to photographic challenges. Choreographing rattlesnakes, rounding up cowboys, wrangling a movie icon—it’s all in a day’s work for the 31-year-old commercial photographer. So, in a recent shoot for the retailer L.L. Bean, he insisted on some particulars. Charged with re-creating the company’s hand-rendered art commissions—idyllic scenes of Americana from the 1930s, ‘40s and ‘50s—for a series of catalog covers, Ford painstakingly restaged a 1933 fishing scene in Freeport, Maine, down to period-specific costumes (borrowed from New York City’s Metropolitan Opera) and the precise breed of fish (eastern brook trout). Ford even hired a biologist to keep the fish alive during the shoot. (Dead fish would look fake, Ford says.)

Such exactitude, in addition to his painterly visual style evocative of apple-pie values, made Ford the man for the job. But to hear him tell it, the gig’s beginnings were rather humble. “I guess it started with the cows,” says Ford from his home base in Austin. “I shot a series of dairy-cow portraits for [the trade magazine] Dairy Today a few years back, and that got me on their radar.” The cows, like the catalogs, are signature Ford: slick, graphic and whimsical, their nod to the good old days leavened by high-tech savvy and wry humor.

None of this was part of the official plan when Ford enrolled at Texas A&M University in 2000 to study business 12 years ago. But it wasn’t long before he deviated from his core courses to pursue a growing interest in photography. “I was part of the generation that grew up on digital,” he recalls, “and that made things really accessible. I went online and explored, taught myself some of the basics. [The Web] is a great asset, and the feedback is immediate.”

After earning his business degree, Ford eschewed a traditional art education and instead jumped straight into the field. Inspired by both the warts-and-all portraiture of Richard Avedon and the homespun realism of Norman Rockwell, he strove to establish his own look. “When I got into photography, I knew I wanted to do commercial work, collaborate with advertising agencies, be in magazines and have a very specific style,” he says. “I think knowing this made the path quicker.”

It certainly made for a magnetic draw, as the young shooter lined up clients including Texas Monthly, Audubon and Fast Company magazines and such high-profile agencies as Pentagram, TBWAChiatDay and The Richards Group. Ford photographed Hollywood legend Tommy Lee Jones for Dallas-based D Magazine at the ripe age of 25. “He really hazed me,” Ford recalls, chuckling. “He busted my chops.”

Ford’s breakout project was The Amazing Faith of Texas, a 2006 coffee-table book by Roy Spence that surveys the the Lone Star State’s spiritual diversity. “It was an exciting opportunity, but daunting and downright scary at times,” Ford says. “The project gave me credibility.” And as his practice grows, Ford continues to refine his signature blend of animals, humor and good-ole-boy values. His dream assignment? “I want to shoot the Chick-fil-A calendar.”

Close Up: Randal Ford
randalford.com
Lives In Austin, Texas
Studied At Texas A&M
Awards: Communication Arts 2012 Photography Annual; Lürzers Archive 200 Best Ad Photographers Worldwide 2010/2011; Graphis Photography Annual, Self Promotion, 2010
Clients: Include The Home Depot, Ace Hardware, AARP, Dell, AT&T, Pentagram, TBWAChiatDay, Fast Company, Texas Monthly
In the Bag: “My equipment is a tool,” Ford says. “I used to use a medium-format digital-back Phase One system. When the Nikon D800 came out I switched. It’s a perfect size chip for what I do, and it’s more fun to shoot with a DSLR than a digital back.”

American Photo
One To Watch