Creating a Comprehensive Portrait of Syria at War 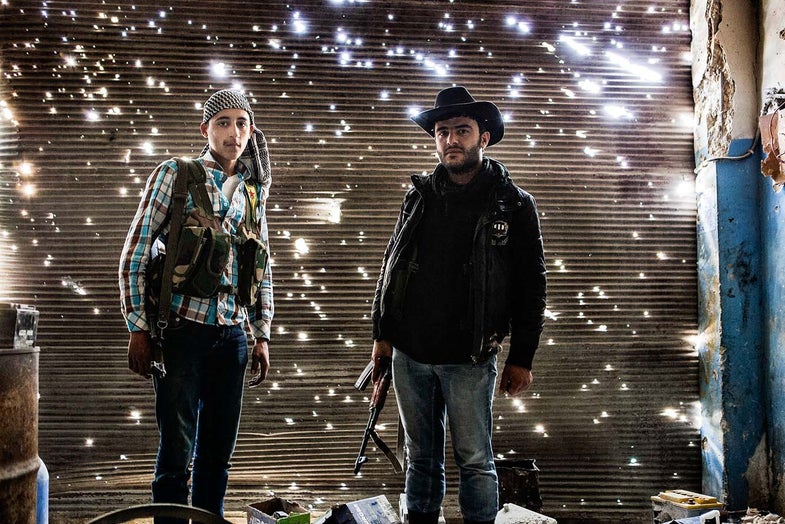 Two YPG fighters stand in a damaged garage in the Sheikh Maqsood District of Aleppo, Syria on April 20, 2013. The YPG (Popular Protection Units) of the Kurdish Democratic Union Party (PYD) considers itself a popular democratic militia with the mission of maintaining order and protecting the lives of those in the primarily kurdish districts of Syria. In March of 2013 the YPG and FSA began to cooperate in the conflict against the Syrian Regime. © Nish Nalbandian
SHARE

Before American photographer Nish Nalbandian went to Syria for the first time, his only experience of war came from movies.

“Images of Total War à la Saving Private Ryan ran through my head as I approached the border from Turkey. Would there be just a storm of bullets and bombs? Would I need to run and duck for cover? Would I need the body armor I wore?” he writes in the introduction to his book, A Whole World Blind, which Daylight published in October.

But at least up until April 2014, when he last visited the country, war wasn’t at all what he expected. There were bombs and bullets, sure, but everywhere Nalbandian went there were also people shopping, cooking, getting married, having babies—in other words, getting on with their lives as best they could.

Nalbandian went to Syria initially with the idea of making portraits of the people caught up in a war that has, since 2011, killed hundreds of thousands of people and displaced millions. He had no intention of becoming a combat photographer. Soon enough, though, combat found him.

A Whole World Blind is, as a result, a mix of the monstrous and the mundane. On one page you’ll find a bloody body, on the next you’ll find a man decorating his car for his wedding day. What that makes for, ultimately, is a comprehensive portrait of life in a time of war.

I caught up with Nalbandian by Skype from Mosul, where he’s photographing Iraqi special forces battling ISIS for control of the city. Our conversation has been edited for length and clarity.

In the book, you describe being in Aleppo shortly after arriving there, cringing as shells explode nearby: “The people on the street around me continue going about their business. They have been through this before. They know what to expect. I do not.” Did you ever get used to being in that environment?

Everyone that’s there gets used to it. Your initial response is to duck and be startled by everything. It just takes a couple days of noticing the people around you. If they’re not reacting, you learn you don’t need to react. You start to be able to differentiate the different sounds and identify what’s a threat to you and what isn’t.

You didn’t come to Syria intending to photograph combat, but you ultimately did cover it. How did that happen?

There’s two parts to it. One is, if you’re there and moving around and trying to photograph fighters at different times, something will happen near you. You’re just surrounded by it, so these things will happen. The other thing is, you could go there and stay away from the front lines, but it gets kind of seductive. There are good pictures there. People go [to the front lines] for different reasons. I like to think for me it’s not just adrenaline, but that definitely plays a part. You get to a point where you like being around these situations and for me that was the time I realized it was time for me to leave.

You photographed at the funeral of an Opposition fighter, Ahmed Ibrahim, who had very recently been killed. “His brother had opened the shroud and motioned for me to photograph his dead brother’s face,” you wrote. How often did you take photos other people wanted you to take?

My experience is you go places and people will always be like “Take a picture of this, take a picture of that.” Most of the time you just don’t do it. Other times—especially if it’s kids—you take a picture just to get them off your back. In this case, I wanted to see what was going on at the funeral, and I wanted to take pictures of people there, and honestly I didn’t even think to ask, “Hey, can I see Ahmed’s face?” But the brother was like, “I want you to and I want the world to see who my brother was. I want you to record his face.” So my needs or desires of what I wanted to accomplish meshed with what this man wanted, which was for his brother to be memorialized in some way. There’s a fine line between taking a picture that someone wants you to take and that actually being something you need and want. As a photojournalist, you need to be careful that you’re not subject to propaganda or set-ups.

Speaking of which, more and more armed group are bypassing journalists entirely and posting their own images and messages to social media. Did you witness that at all in Syria?

The groups I was around were what you’d call the moderate opposition. They had media offices, but the goal of the offices was not to produce their own material. They wanted foreign press in there to produce high-quality material that would have a broad distribution. That changed when some of the groups started bringing that talent in-house. They hired or recruited people who were savvy media people that they’d send out to make the pictures themselves. Then they didn’t have to worry about whether some photographer was going to take a picture of one of their guys doing something wrong or being in a position of weakness. They could tailor their brand exactly how they wanted. When I was there, those guys weren’t there yet.

Greg Campbell, director of Hondors, wrote in his essay in the book, “Photos don’t always need to show the most gruesome aspects of warfare in order to remind us of how horrible it is; sometimes it just takes reminding us of the humanity of those who suffer through it.” What’s the role of gruesome imagery in representing war, in your opinion? And why did you choose to include it on the occasions you did in the book?

I think there’s a validity to what people call compassion numbness. If you start seeing this stuff all the time, it doesn’t mean anything to you or it turns you off. Who’s going to want to look through a book of a bunch of pictures of dead bodies? It’s pretty awful. So the decision-making process was: how do we include it in a way that makes sense in the flow of the book and the narrative we were trying to tell? It gets the point across that this is happening and hits the viewer pretty hard but doesn’t overwhelm by continuing it. These are representative of what else is happening. You see the pictures of the dead little girl and you know there are other dead little girls. You don’t have to show all of them to get the point across.

Plenty of your photos don’t show violence or bloodshed, but simply people going about their lives. To what extent did you see it as your responsibility to reflect that side of war?

I thought it was a big responsibility. I thought it would be wrong of me to not show those things because that’s a big part of what was going on. I didn’t consider myself a news photographer because as a news photographer your job is to take pictures of things that are newsworthy. Kids playing marbles isn’t newsworthy, but it’s documentary photography that shows what’s going on in this place in sort of a broader picture rather than, “Hey, there was a battle here so I have to take pictures of it.” I did that too, but that wasn’t the main reason I was there.

When I was in Aleppo, what I saw most of the time were fairly normal things, except for the destroyed buildings and stuff like that. It’s people living their lives. Life goes on in the midst of this conflict. People have to eat and drink and find shelter and gas and do things people everywhere else have to do.

The New York Times’ Michael Kimmelman wrote an article in December called How the World Closed Its Eyes to Syria’s Horror. He says, “We have never before received such a deluge of images from any front,” but claims, “Washington shrugs,” and “all we do is watch, helplessly.” What role do you think images have played in this war?

I’m not sure I’m qualified to answer that, but I’ll give you my opinion. As a photojournalist or documentary photographer you hope somehow when you’re seeing these things your images can make some sort of difference. That’s happened in the past. James Nachtwey, for instance, made people see people dying in Sudan and it changed policy. That happened with Nick Ut when he photographed the girl in Vietnam. Whether that can happen now or happened in Syria, I don’t know. We had those strong images of Alan Kurdi, the boy who washed up dead on the beach, but it didn’t really change anything. There’s a cynicism that starts to build up when you see people documenting what’s happening and the world lets it happen still, despite this human testimony of what’s going on.

How do you feel now when you see the news from Syria these days?

Disgusted. I’m not an expert on geopolitics, but there are a lot of things that could have been done to prevent this particularly horrible outcome, and it comes from not having the political means or will to change it. I don’t like hearing people say, “My thoughts and prayers are with Aleppo.” My first thought is, “Fuck that. Where was your money three years ago when people were fleeing and it was winter in Aleppo and people didn’t have blankets and there were no refugee camps?” Those people really needed help and not as many people were helping. No one was writing their congressman, then saying we need to do something about this. They were saying it will take care of itself.

You’re photographing conflict in Mosul now. Do you think you’ll continue to focus on war zones throughout your career?

Honestly, I can’t say. I want to limit my exposure to it partly for safety reasons and partly for sanity reasons. You see traumatic things, and everyone who sees traumatic experiences has a response to it. I don’t have PTSD but the more you expose yourself to things, the more you are vulnerable to that. I have nephews now. Mosul might not be my last conflict, but it might be the last I cover really heavily. In the future I might do a portrait project. If something were to break out, I don’t know if my impulse would be to rush out there and go to a conflict zone.