Could Photos From Fukushima Bring Japan and Korea Closer Together?

You might have heard about the recent territorial dispute between Japan and China, over the Senkaku islands, a tiny, uninhabited... 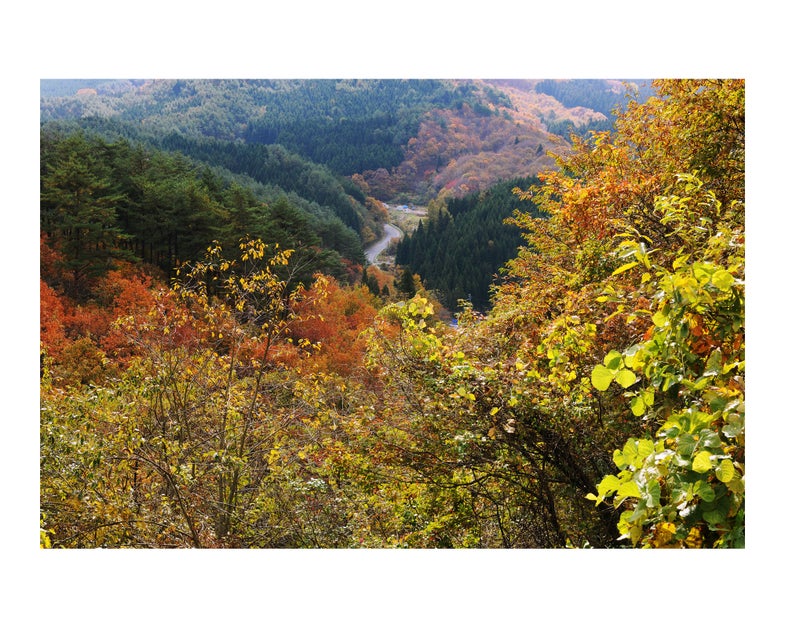 You might have heard about the recent territorial dispute between Japan and China, over the Senkaku islands, a tiny, uninhabited range that lies in the East China sea between the two countries. This issue has made big headlines of late, but Japan has a similar, and much longer historical feud with Korea. In fact, at this moment, relations between Korea and Japan are as strained as ever: a Korean soccer player was denied an Olympic medal after he held up a message about another disputed territory (known as Takeshima in Japanese and Dokdo in Korean), and around the same time, current Korean Prime Minister Lee Myung-bak paid an unprecedented visit to the island, prompting a furious response from the Japanese government, which in turn led to a farcical standoff in which the two governments literally played hot potato over a diplomatic letter. 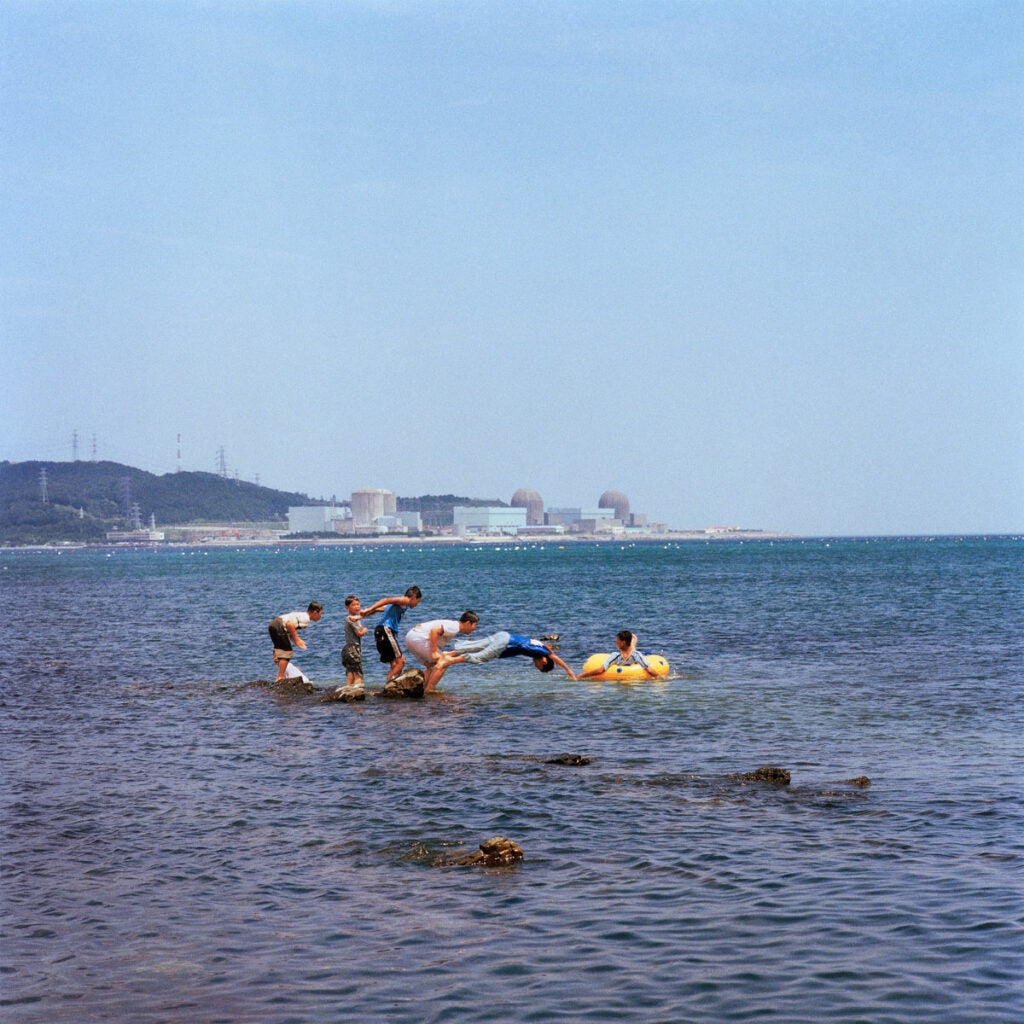 It is an interesting time, then, for Korean photographer Chung Chu-ha to travel to Japan to photograph areas near the Fukushima nuclear power plant, still disabled after the region’s devastating earthquake and tsunami. Especially so considering that the name of Chung’s project (“Does Spring Come To Stolen Fields?”) references a famous poem written during Japan’s early-20th-century occupation of Korea—the still-exposed nerve of the long-simmering tensions between the countries. The combination of Japan’s still-recent trauma, together with bitter memories of Korea’s colonization, could be an explosive one, to say the least. Despite this, though, Chung’s project is not an attempt to kick Japan while it’s down. Instead, his photographs are a complex, almost psychological attempt to foster a new understanding between the two countries.

Chung Chu-ha is a decorated Korean photographer who spent a significant period of time studying in Germany in the late 1980s. He’s currently a professor at Korea’s Paek-Che Art Institute, and it’s not by chance that he made his way to Fukushima: By 2011 when the tsunami hit, he’d already produced a significant body of work on nuclear reactors. Over a number of years, Chung documented the areas near Korean nuclear power plants, focusing on the way that people interact with them. In 2007, his work was published as a book, A Pleasant Day. A comparison could be drawn to Japanese photographer Taishi Hirokawa’s book Still Crazy, which also shows power plants in their “natural” context. Still, Hirokawa’s book ends up coming off a little bit like a catalog: there’s one photo for each power plant in Japan, and the power plant is usually the distinct subject of each black and white photo. In Chung’s photographs, on the other hand, human activity is always the subject of the photograph—even though he’s obviously interested in the power plant, it lurks in the background.

Apart from his atmospheric shots of the reactors, Chung shows straight-on portraits of the people who live near them. In an email, he told me “people who live very close to the plant cannot move, because the price of their house, and land, is so low. They are very worried to live there, so the quality of their lives is awful. They have more anxiety in managing their daily life than they do anxiety about radiation, so in order to dissolve their ordinary anxiety, they are hiding the anxiety that comes from radiation.” He says that this human aspect of the situation, and especially the anxiety felt by these people, gave him great motivation to photograph. 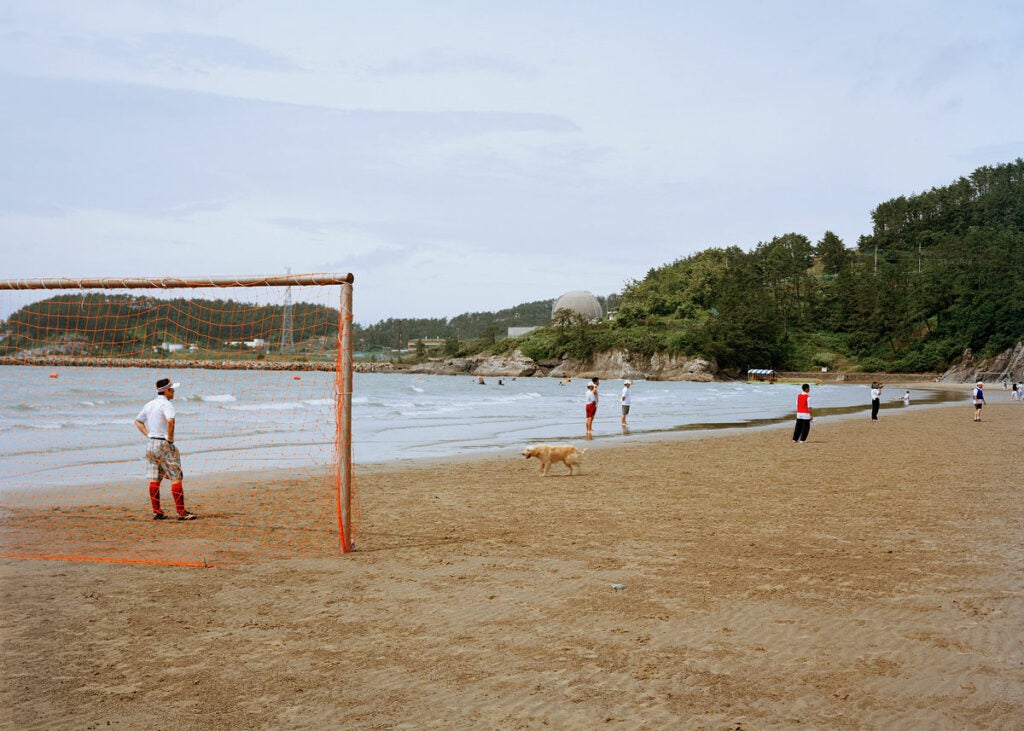 In March 2012, shortly after the Fukushima incident, Chung found out that there was to be a government-sponsored nuclear convention held in Seoul. He decided that this would be an ideal time to put together a new photo project related to nuclear power, and he started to plan his trip to Fukushima together with two well-respected Korean historians, Han Hong-gu and Seo Kyung-sik. (Seo himself is a professor at a Japanese university, Tokyo Keizai.) All in all, Chung made three trips to Fukushima between October 2011 and March 2012, eventually holding an exhibition at Seoul’s Peace Museum and publishing a book, all under the name “Does Spring Come To Stolen Fields?”

The reason for using this title is essential for understanding the goals of Chung’s project. “Does Spring Come To Stolen Fields?” is also the title of one of the most famous poems written in Korea while under Japanese rule. Written by Lee Sang-hwa, it is an elegy for a land that no longer belongs to its own people. (I do recommend reading the poem, which is available on Google Books.) Han has explained the impetus for using this poem as the title of Chung’s photographs, and the explanation is somewhat psychological in nature: in effect, the idea is to promote a kind of mutual sympathy through a shared experience of pain. He brings up the fact that the Peace Museum in Hiroshima does not make significant mention of Japan’s own role in the events of World War II, but says: “I agree that it is to be condemned if Japanese people acknowledge only their own pain and ignore that of Koreans, and other victims of the war caused by Japan. But still, isn’t there the possibility that Japanese people could sincerely learn to face and understand the pain of Koreans from their own experience and expression of deep pain and appeal to others?” 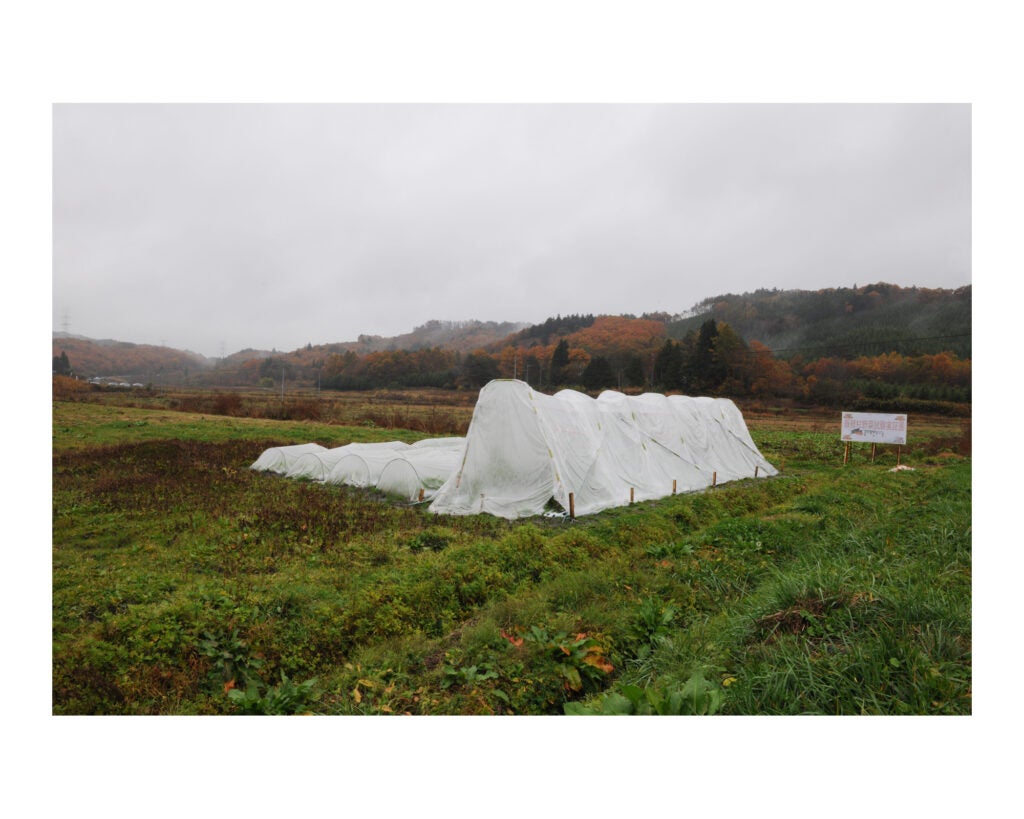 From “Does Spring Come To Stolen Fields?”

Certainly, the events of 3/11, including the Fukushima incident, are painful. But looking at Chung’s photographs from Fukushima, you wouldn’t even know that they were taken there—they look like simple images of a beautiful countryside. This is part of the point, though. Seo, the historian, notes that outside of the first and last lines, the poem makes little mention of the political situation in which it was written: “the rest of the poem is no more than a beautiful pastoral. There is no indictment of Japan’s colonial rule and no description of people’s sorrows and pains. In fact, what delivers the losses, futility, grief, and resentment of those who are on the verge of losing “their root” in deprived country much more acutely and deeply is the absence of their mention.” Chung’s photos could be seen in much the same way, and certainly Seo does so, writing that his work shows “the presence of absence.”

Photographically, this is a tough proposition, because it’s a little too easy for the typical viewer to pass over these photos without any emotional reaction. I could only understand what Chung was trying to do after reading the texts written by the historians, as well as the poem itself. Although these texts deal with extremely sensitive topics—recent political scuffles only hint at the depth of feeling here—I was moved by the sincerity behind their words, and the genuine desire to arrive at a common, human understanding through shared experiences of pain. My personal reaction to the photos was intensified by these words, but wouldn’t people in Fukushima, to whom this land actually belongs, feel an emotional impact from these images even without reading the texts? Lee didn’t need to hit his audience over the head, because he was certain that the feeling of loss he wanted to convey would be entirely clear to those under colonial rule, or in exile. In the same way, Chung could be speaking directly to those still evacuated from their now-radioactive homeland. 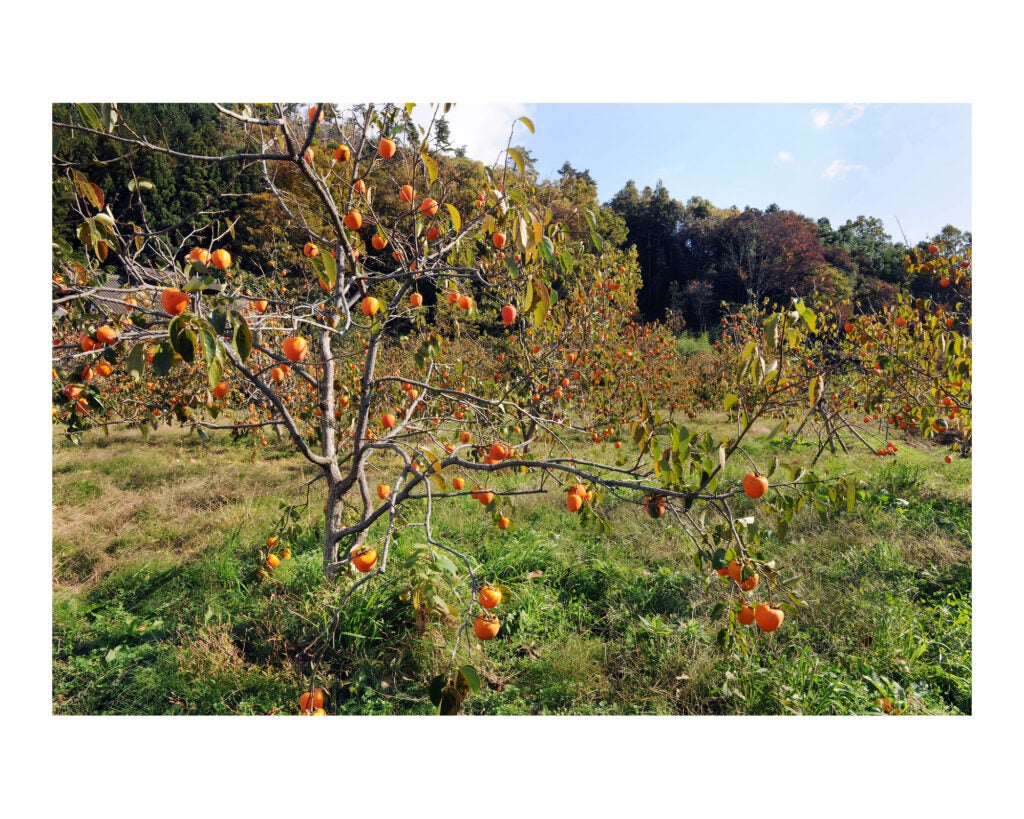 From “Does Spring Come To Stolen Fields?”

So far, most photographs documenting the earthquake and tsunami of 3/11 have been made by outsiders (with the exception of the excellent Rolls Tohoku project, which put disposable cameras in the hands of the region’s people immediately following the disaster). This has always struck me as a disappointment. What good will this do for the people who have actually been affected by this triple disaster? In his text, Seo relates an anecdote in which a man approaches the group, and somewhat angrily tells them: “I can’t take any more of this. We live here. You guys keep coming, taking pictures, and then drive off. There is nothing you actually do for us!” Chung’s project is making a conscious effort to break through this disconnect, though I do wonder what its real effects will be. Seo has offered an eloquent perspective on the possibilities contained in Chung’s photographs. He says that, in the early 20th century, there was a chance for Japanese and Korean people to join together to prevent their governments from going down the path that eventually led to imperialization. “Now,” he writes, “we Koreans are asking Japanese people not to repeat this history of harming both the others and themselves by blindly obeying the orders of the country. We need to encourage them to achieve a spiritual independence apart from national power interests. A new era of solidarity between the people of Japan and Korea would grow.” At this difficult time for Korea and Japan, this seems like a tall task, but perhaps this sensitive moment is will be the right time for such an ambitious proposal.

Han, for his part, has offered an agonizing reminder of why Chung’s photographs could ring true for years to come:

“Though Lee Sang-hwa could still limp through the stolen fields, breathing the scent of grass, Fukushima today allows for no visitors. Even in the most desperate situation, exiled freedom fighters in Korea never lost their hope to come back and recover the stolen fields. Yet Fukushima doesn’t allow even for this simple dream. No matter how eager the people of Fukushima may be, technically there is no hope for them to return to their radiation-contaminated lands for hundreds, thousands or maybe even tens of thousands of years.”