A Colorful Vision of Japan’s Past, Present and Future

At first glance, Kazuyoshi Usui’s “Showa88” might appear like a straightforward, if fanciful, portrait of Japan: you’ve got beautiful flowers, … Continued 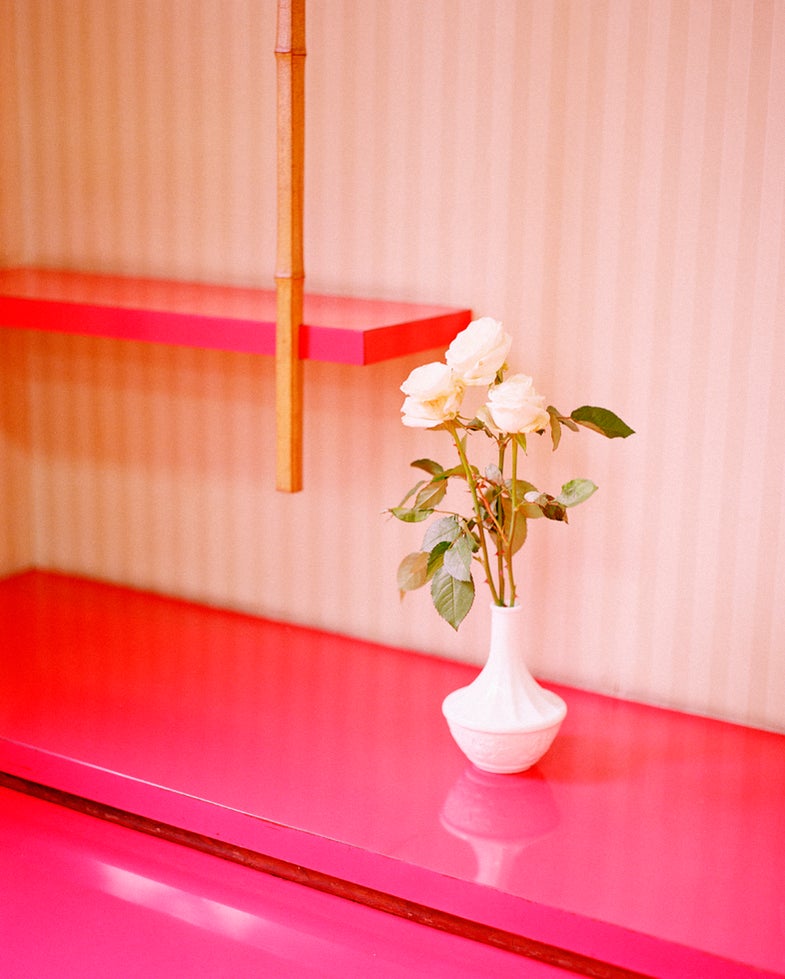 At first glance, Kazuyoshi Usui’s “Showa88” might appear like a straightforward, if fanciful, portrait of Japan: you’ve got beautiful flowers, yakuza, geisha and plenty of bright colors. Look a little closer, though, and you might find that the colors are a little bit too bright, almost saccharine-sweet. “Showa88” is all about playing with the real and the fake, to create an imagined world in which Usui mixes together elements of Japan’s past, present and future.

The concept behind “Showa88,” which has been published in Tokyo by Zen Foto Gallery, requires a little bit of explanation. Along with Western years, Japan also uses an imperial year system, where different periods correspond to the life of each successive emperor. This year, 2012, corresponds to the 24th year of the Heisei period. Before Heisei was Showa, a period that lasted 64 years until 1989. The idea behind “Showa88” is to depict a world in which the Showa period never ended. But, why Showa? For Usui, Showa represents a colorful, vivacious way of life—almost an optimistic attitude of survival in the face of difficult conditions. Usui says that “with photographs, you can only shoot what’s happening now,” and he wondered if he could still find and photograph this Showa feeling in contemporary, comfortable Japan.

Usui’s search took him to some of Japan’s oldest red-light districts in Osaka and Kyoto, where he made many of these photographs. We talked with Kazuyoshi Usui about “Showa88,” the difference between photographs and films and why John Waters is his sensei of “good bad taste.” (This interview is translated from Japanese.)

How would you explain the concept of “Showa88”?

The idea of this work was to ask, “if the Showa period continued until this day, what kind of world would that be?” It’s an imagined world. The Showa period ended in its 64th year, so 2012 would be Showa 87. I published the book last year, so at that time it was 2 years in the future. I wanted to make a kind of “Japanese cyberpunk.” Even if you think you want to make something about the future, or the past, with photographs, you can only shoot what’s happening now. So to make “Showa88.” I decided to shuffle up the past, present and future.

What does “Showa” mean to you?

It was a really turbulent time, lots of things were going on. The war, of course. First losing the war, then after that our parents had to work really hard to rebuild the country. This was a really lively period, almost in the sense of survival. It practically radiated life. Now, because of the hard work of the last generation, we’re able to live very well, but I think we’ve lost that sense of liveliness. Wondering where I could find this sense again was the trigger to make this work. I found that in Osaka, or Kyoto, there are some run-down areas that still have this sense of survival. What makes these places different? It’s the color. If you go to some fashionable place in Tokyo, it’s all gray, concrete. The areas I’m talking about might be old, but they have color—it’s like a flood of color.

Pink is everywhere in this book. The cover cloth is pink, and it seems like half of the photos have pink in them. Why?

If you were to look at the honeymoon photos of my parents, you’d see that the prints have taken on this magenta tone. I thought that was interesting, it feels old, but also new. There’s a kind of nostalgia there.

And how is pink related to the present?

Well, I was thinking about photos like in the brothel, the plastic stuff—

Yeah! The plastic flowers in the street, or the decorations in the brothel. It’s a really chemical type of color. It feels cheap, which is good! It’s in bad taste, but it’s “good bad taste.” That was the goal. Of course, if you go too far with the fakeness, that’s a problem. In this book, I’m trying to balance it: there are some gorgeous things that feel fake. I like that kind of mix.

“Good bad taste,” huh? What does this mean in Japan?

Well, my “good bad taste” sensei [_Usui’s word_] is John Waters. Not just because I liked Pink Flamingoes or something like that. I mean, I’m sure that guy has got some photobooks in his house. The things he pulls together are vulgar, but it’s a good vulgarity. Now, how to bring this sense to Japan is another question. [laughs] Movies are really my base, though. I respect Tarantino a lot; he can take old and new culture to create something new. I’ve been interested for a long time in doing something like this. There are lots of famous Japanese photographers from the 1960s—Hosoe, Moriyama, Araki—and I don’t want to copy them. The challenge is how to take that sense, or essence, and make it fit in the world of 2012. There’s a lot to work with there!

“Showa88” was originally going to be a movie, right?

Yes, at first it was a series called “Bullet Boy.” It was a kind of cheesy drama, about the last moments of a yakuza as he’s getting shot. But it ended up being way too much like a movie, it was too perfect. For photographs to work, you have to get the viewer to think a little bit—that’s maybe the most interesting thing about photography. So “Showa88” is an attempt to make that work more photographic. There are a few photographs from the original “Bullet Boy” series in “Showa88.”

So how did you push the work to be “more photographic”?

People who looked at “Bullet Boy” got it pretty quickly—”oh, I see, it’s this kind of scene.” With “Showa88,” there can be different readings of the images. Different people will see different things. Some people will recognize, “oh, this is Tobitashinchi [a red-light district in Osaka],” and others won’t. There’s a rose on the cover of the book. You could think, “Ah, what a beautiful flower!” Or you could think, “Oh, that’s a flower inside of a brothel.” These different reactions are interesting, and I want to let the viewer make what they want of the photographs. Movies aren’t like that—I mean, you sit there for two hours to figure out the story, and then you can think about it. Before, I was trying to make a work that had a similarly strong story, but as a medium photography’s not well suited to that.

Are you worried about how foreign audiences will receive your work?

Not really, because of how I feel about photography. I’m relaxed.

You went to Paris Photo last year. How was that?

Oh, I got a good response. I did all kinds of English preparation, to speak about the Japanese imperial year system, and the meaning of Showa. I was ready to explain all that stuff, but I didn’t get one question about it! I mostly heard comments like, “oh, those are good photos.” People responded to the color. I heard people saying that the cover was pretty, but there was no way I was going to explain it!