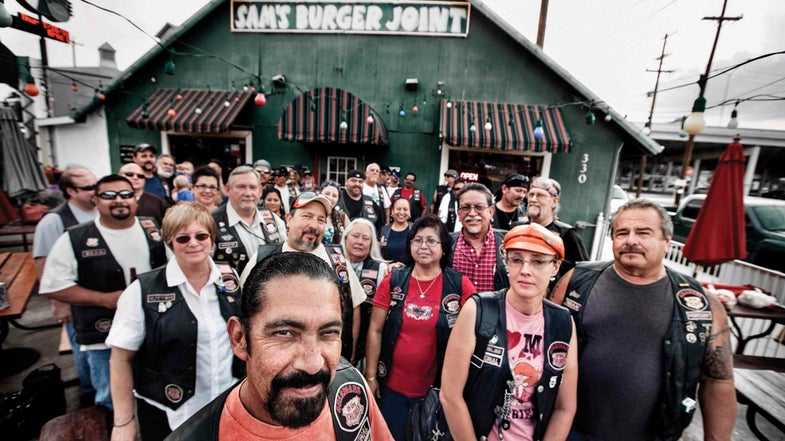 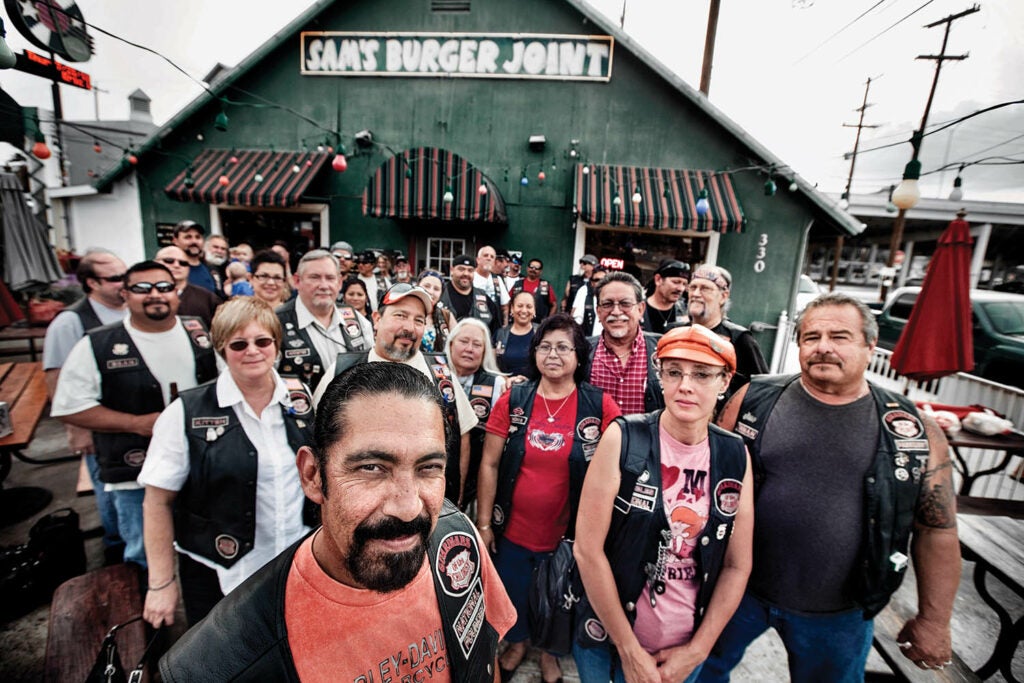 Portrait of the Texas Guardians of the Children chapter outside of Sam’s Burger Joint in San Antonio. 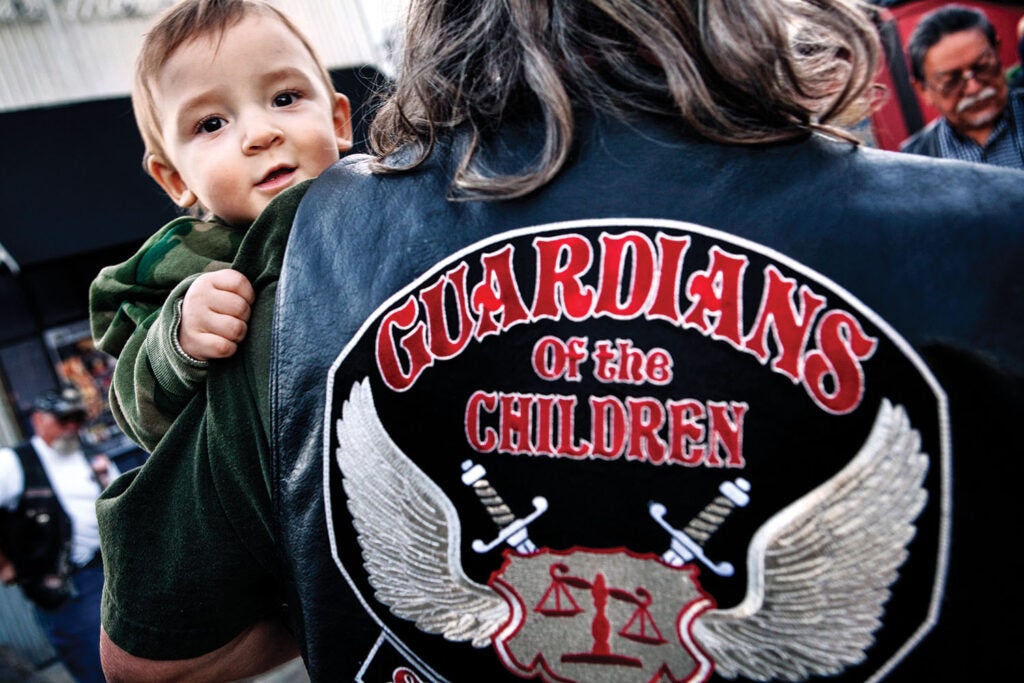 A GOC member with his own child at one of the group’s monthly meetings. 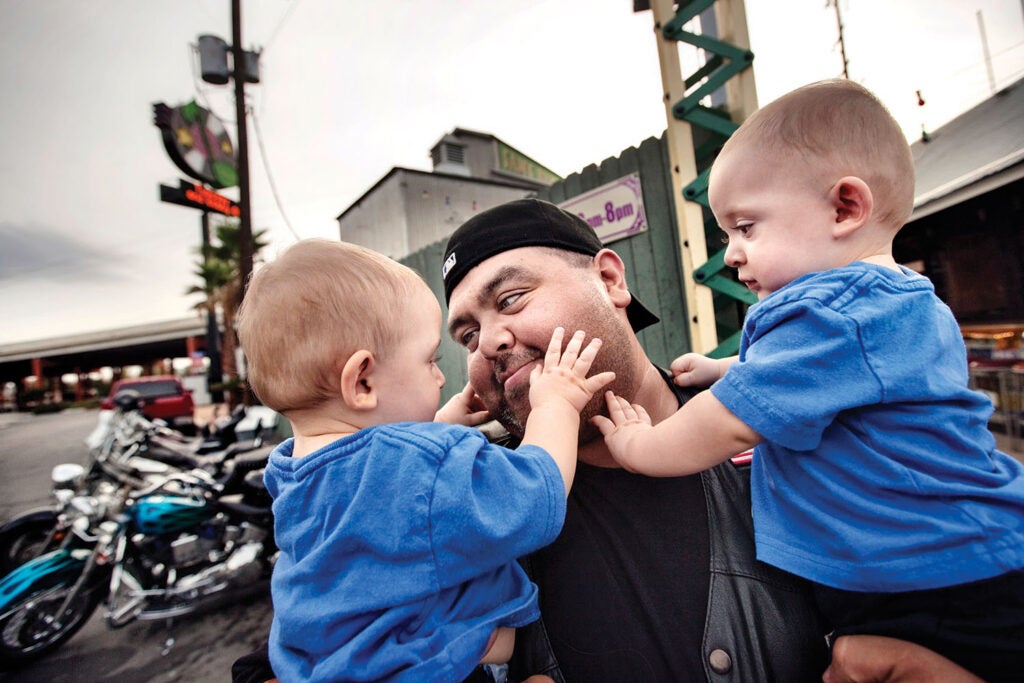 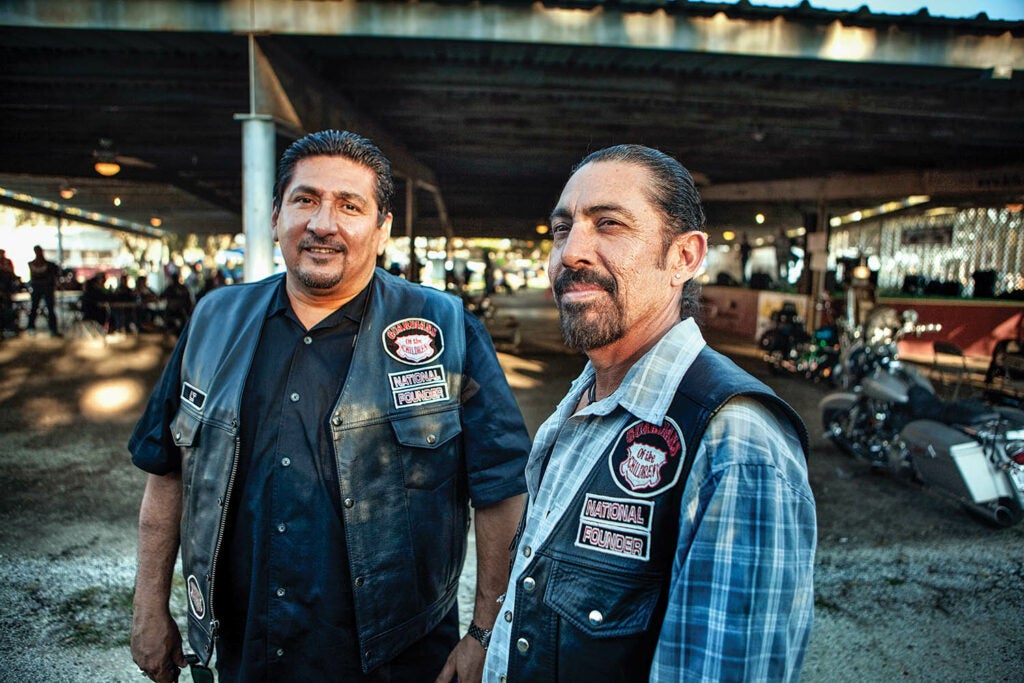 Italian photographer Claudio Cricca can often be found quietly waiting at the edges of society in pursuit of his artistic dream: giving voice to the voiceless. His subjects have ranged from the inner workings of Italian asylums for the criminally insane to gay police officers in New York City. Though he fears his dream may be banal—or even worse, arrogant—he knows the benefits that media exposure can bring to those who suffer alone, and he wants to help illuminate their plight.

Cricca brings this approach to his series on Guardians of the Children (GOC), a biker organization based in San Antonio, Texas, dedicated to protecting victims of child abuse.

Cricca didn’t seek out the GOC; he was in Texas for another shoot when he met a member by chance. He learned about the group’s mission—”to recognize and react to child abuse and educate the public to do the same; to serve as advocates to provide strength and stability to families in crisis,” according to its website—and was immediately drawn to the cause. Cricca reached out to the club’s president. The initial contact was awkward, as the GOC had rarely worked with or sought out attention from the press, but Cricca persevered and eventually got permission to photograph group activities, so long as he didn’t publish recognizable images of the abused children, many of whom are under court-ordered protection.

Cricca does photograph other visiting children at the GOC’s public events, most recently a fundraising rally held in Helotes, Texas, in October 2014 (the grand prize in the raffle was a 2014 Harley-Davidson Low Rider). He likes to plunge into the center of the activity with his Canon EOS 5D Mark III and Canon EF 24–105mm f/4L IS zoom—the camera affords him speed and spontaneity while the wide-angle lens lets him get close enough to be part of the event. “I don’t like to just be a spectator far away,” Cricca says. “I like to shake hands with the people I’m going to photograph.” Wide-angle views also suit what he calls a “photographic reading” of the action. “Using a telephoto lens with the GOC, the feeling would be completely different,” he says. “The wide angle covers a big angle of life. The telephoto gives you just a little detail.”

In this series, while he’s shooting on behalf of kids in desperate situations, Cricca wants to make pictures that will raise people’s spirits. This sets the project apart from much of his other documentary work. Cricca often employs the wide-angle’s depth of field by arranging many elements into complex compositions—an approach best seen in “Faceless,” his evocative black-and-white study of the Italian hospitals for the criminally insane, which culminated in a book Damiani published in 2008. In that long-term project, the identities of the subjects are deliberately obscured. “’Faceless’ is very complex work, coming from the idea I had for the shoot,” Cricca says, noting that the way he shoots the GOC is much simpler: “The GOC is more for everybody.” He adds that while he would have found it interesting to shoot black and white under the blazing Texas sun, he chose color in order to give these images an upbeat feeling. “In my opinion, regarding these kids,” he says, “their life was black and white before they met the GOC.”

Cricca shoots commercial and editorial assignments for publications including National Geographic Italia,_ GQ Italia_,__ and_ The New York Times_; he’s currently at work on a multivolume series of cookbooks. But he usually finances personal projects such as the GOC—he’s made four round-trip jaunts to Texas from his home in Bologna, Italy—on his own dime. “Even though I’m a professional shooter, I don’t care if I make a profit with these projects,” he says. “I start them just because I feel them.”

Since its 2006 launch in San Antonio, the group has branched into more than 20 chapters around the country and continues to grow. “I can see kids transforming themselves from something afraid to something happy because of the GOC,” Cricca marvels. “The kids have gone through awful experiences, and everyone is working to help them recover. We want to keep the drama in their past.”