The Case For Never Banning Photography

Are photographers ruining everything? 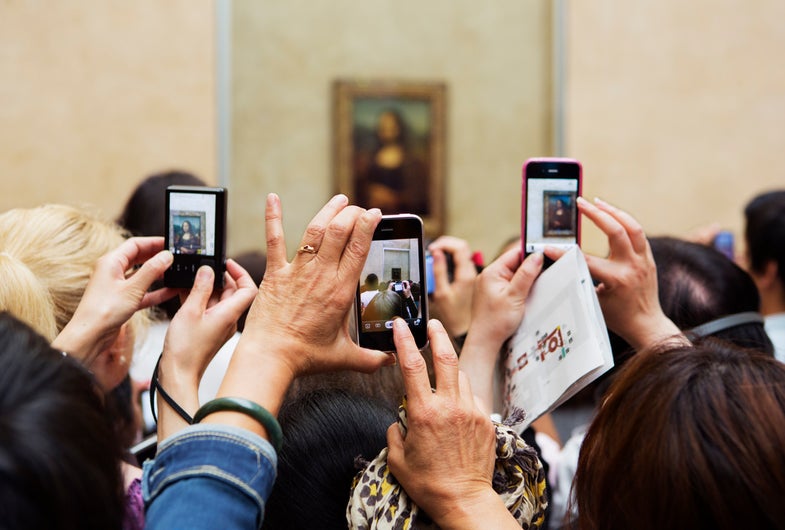 Are photographers ruining everything?

In the past few years at least, that seems to be the story. At museums, they’re swinging selfie sticks into priceless works of art and turning cathedrals of culture into amusement parks. At concerts, they’re blocking the views of fellow spectators and distracting the performers. At restaurants, photographers’ bad behavior has “reached epic proportions,” as diners stand on chairs and use appetite-spoiling flash to document their dishes. At vacation hubs, narcissistic, reckless tourists are turning historic sites into “photography props” for “a viral post on Facebook, Instagram or Twitter.”

Anxieties about damage to property, security, and copyright are prominent among those wringing their hands about photography in the digital age. And, of course, there are certain spaces where photography can do a lot of damage. Photographers can compromise national security by photographing details of structural components of bridges and tunnels, for example. They can pose threat to copyright by making high resolution images of intellectual property for duplication. Flash can damage old canvas and brazen, careless photographers can knock over valuables.

But those worries are separate from what seems to be going on today, namely an ideological concern that photographers are not fully experiencing what’s in front of them. “People taking photographs of their food in a restaurant instead of eating it. People taking photographs of the Mona Lisa instead of looking at it. I think the iPhone is taking people away from their experiences,” photographer Antonio Olmos told the Guardian in 2013, expressing a common sentiment among those condemning popular modern photography patterns.

Those who share Olmos’ view tend to express it by enacting restrictions or outright bans on photography in a variety of spaces. In New York, restaurants including Momofuku Ko in New York, and Chef’s Table at Brooklyn Fare have forbidden photography. At Grenouillere in northern France, Chef Alexandre Gauthier justified a photo ban to the Daily Mail this way: “I would like people to be living in the present. Tweet about the meal beforehand, tweet about it afterwards, but in between, stop and eat.”

Before a series of concerts at the Hammersmith Appolo last year, singer Kate Bush wrote a note to her fans on her website asking them to refrain from taking photos: “I very much want to have contact with you as an audience, not with iPhones, iPads or cameras. I know it’s a lot to ask but it would allow us to all share in the experience together.” In the past few years, other artists, including the Yeah Yeah Yeahs, Prince, and She & Him have banned photos, or strongly requested that none be taken. Savages requested no cameras at performances with this note: “Our goal is to discover better ways of living and experiencing music. We believe that the use of phones to film and take pictures during a gig prevents all of us from totally immersing ourselves. Let’s make this evening special.”

According to journalist Rupert Christiansen, photography was banned in almost all museums and galleries 20 years ago; only in the past few years have museums started to change their policies. While concerns about safeguarding the artwork have often been a justification, Jonathan Jones, writing in the Guardian earlier this year, typified the more puritanical argument about when he called photography a “spiritual menace” that disrupts the idea of a museum as “place of calm contemplation.” “Modern tourists, it seems, cannot enjoy looking at art without photographing it, and themselves in front of it. The camera has become a prosthesis for looking,” he wrote. “We don’t need to concentrate on works of art and remember them: a smartphone can do that for us.” (Jones reversed his position a month later.)

Anyone who’s sat in a restaurant, attended a concert or visited a museum knows that photography in public places can be disruptive, distracting, and downright rude. But it’s time to do away with bans, some photography experts argue. Not only are they ineffective, but they fail to recognize modern notions of how photography relates to people and places.

Banning photography in an age where there are more cameras than ever is not just misguided, it’s a near impossibly says Stephen Mayes, Executive Director of the Tim Hetherington Trust. “I don’t see how there can be more restrictions on photography really, simply because the visual image is being so integrated into so many places,” he tells American Photo.

According to data from the now defunct website 1000Memories, photo taking has exploded since the turn of the millennium. In 2000, it estimated about 86 billion photos were taken a year. By 2012, that estimate jumped to more than 380 billion photos, and the following year, Yahoo! estimated that 880 billion photos would be taken in 2014. Last month, the Times claimed one trillion photos will be taken this calendar year alone. Since wearable cameras like the Narrative Clip, which automatically snaps an image every 30 seconds, have been introduced, and as they grow in popularity, the number of photos is sure to skyrocket further.

Museum officials have start to come around to the idea that photographs simply can’t be stopped. “You are fighting an uphill battle if you restrict,” Nina Simon, director of the Santa Cruz Museum of Art & History, told ARTnews’ Carolina A. Miranda.

In 2010, the Museum of Arts and Design followed MoMA and other New York institutions when it lifted its ban. “In an age of blogs, iPhones, Facebook, and WikiLeaks, MAD realized that we could not control the dissemination of images the way we had in the past,” the museum’s director of public affairs, Marisa Bartolucci, told Hyperallergic. This year saw more longstanding holdouts follow suit, including Paris’ Musée d’Orsay.

Those who defend photography bans in museums frequently site Fairfield University psychologist Linda Henkel’s study about “photo-taking impairment effect,” which found that taking a photo of something makes people less likely to remember it. Her evidence is compelling but beside the point, Mayes says. By taking photos at museums and other places, people aren’t trying to remember an experience, they are trying to experience it through images. And when they relay that experience later, the image is not used to trigger a memory, it is the memory. Miranda makes a similar argument: “Twenty years ago, a museumgoer might have discussed an interesting work of art with friends over dinner. Today, that person is more likely to take a picture of it and upload it to Facebook.”

[See Also: Sally Mann on How Photographs Can Remap Our Memories]

Beyond the practical argument against bans, Mayes takes issue with the common justification for restrictions, which states that photography limits our ability to interact with reality. A few years ago, Mayes stopped thinking about photography as extraneous to experience during a meeting with VII photographers, when they started snapping photos of each other with their cellphones and posting them online. “The pictures weren’t documenting what was happening.The pictures were the play,” he tells me. “That moment for me was saying: This is something different. This isn’t a record to create a memory.”

As photography goes beyond a daily or even hourly exchange, it stops becoming a distraction from life; rather, it is life. “People are showing their lives not to create a document but as a part of living. If we were dogs we’d be peeing on fire hydrants. but instead we’re posting to Instagram and Facebook,” Mayes says.

Just as restrictions on photography ignore the relatively new idea that the average person is a walking, talking picture-taking being, they also ignore that the idea that, in a world of billions of cameras, public spaces are places where it is legal and expected for people to have their picture taken.

“If you’re in public, you have no reasonable expectation of privacy. That’s the difference between what is public and what is private. It’s the reason that all those security cameras that are on every city street are allowed to photograph us, because when we’re out in public we have no reasonable expectation of privacy,” Mickey H. Osterreicher, the general counsel for the National Press Photographers Association, told the New York Times.

But time and again, Osterreicher says, photographers are arrested or harassed for practicing their craft within the confines of the law. This ramped up especially after 9/11, as Dan Scott, a street photographer from Vermont, learned when he started taking photos of “life as it presented itself” during his lunch break at work. One day in 2010, he took a photo of a Burlington coffee house employee while she was smoking a cigarette outside in a snowstorm. She noticed him, and when he refused to delete the photo he’d taken of her she called the cops. He was issued a one-year universal trespass from 67 businesses located in the Church Street Marketplace including the coffee shop.

“Not that I ever went in there. That was the irony of it,” Scott tells American Photo. “It was an ineffectual public shunning at best. They were desperate to find something they could do to me.”

Scott’s experience may sound like a strange, isolated incident, but according to Randall Armor, stories like Scott’s are part of a larger “great war on photographers”—a culture of fear and hostility that’s evolved around “the harmless, mundane act of doing what we do: seeing and recording.”

Restrictions on press freedom and news gathering are an evergreen concern—just two years ago, for example, 37 news organizations wrote to Obama press secretary Jay Carney to protest their exclusion from the president’s events—but those are beyond the everyday frustrations photographers face. Armor’s article focused on Karl Baden, a Boston College professor who had recently been threatened by a man who incidentally walked into his frame while he was photographing in a parking lot after a rainstorm. Baden told Armor he’s “long past tired of being treated with suspicion and hatred just because I point my camera out into the world.”

Scott’s run-in with the law in Burlington, meanwhile, left him shaken and intimidated, but he continued to go out shooting while the ban was in place and he still goes out during his lunch break today. “If I stopped then everybody else might stop too,” he tells me. “Having been trained as a journalist, I knew my rights whereas most people don’t know their rights. How irresponsible would it be for me not to exercise my rights?”

Scott’s resolution speaks to a consensus that many photographers, both professional and amateur, have reached: It’s not the job of photographers to change their habits in the face of cultural resistance, but rather, the job of culture to catch up with the new de facto rules of the road. Mayes agrees.

“Imagery is in our lives. It’s woven in with who we are and we just need to understand that and deal with it as best we can. To my mind, the key has to be about knowledge. It’s less about restriction and more about educating. It’s not to say, ‘Don’t do this,’ but rather, ‘What are you doing?’ People are going to make pictures in any space the want. We can’t control that at this point,” he says, “but we can inform ourselves about what is happening and that is both protection and an asset.”