Books of the Year: Corey Arnold’s “Fish-Work: The Bering Sea”

Corey Arnold has been taking photographs almost as long as he’s been fishing, and his father had a hand in... 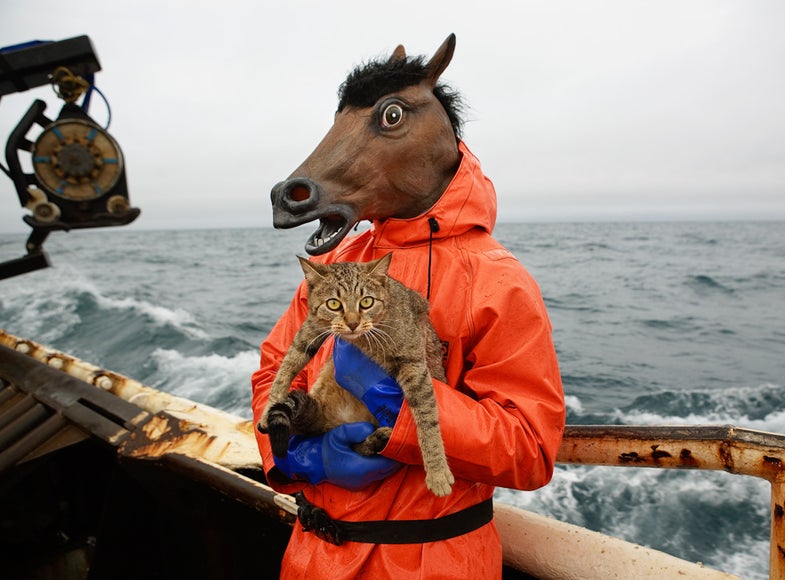 Corey Arnold has been taking photographs almost as long as he’s been fishing, and his father had a hand in planting both seeds early. On their weekly sport fishing trips off the coast of Oceanside, California, Arnold’s dad was “pretty obsessive” about photographically documenting everything the father-son duo reeled in.

Some thirty years later, Arnold’s early love for photography and fishing (he’s been a commercial fisherman for 15 years) has given us Fish-Work: The Bering Sea (Nazraeli Press), one of our favorite photo books of 2011 (see all 50 of our top picks here). And for that we are thankful. Taken while working the king crab fishery in the frigid Bering, Arnold’s photographs give us a clear look at one of the world’s most dangerous jobs. But Deadliest Catch, the Book this most certainly isn’t: Arnold’s work buzzes with a very personal energy, one that encapsulates the pain, humor, camraderie and wonder of work at sea with more feeling than any reality show could hope to muster. I spoke with Corey recently about animals, piñatas and, yes, the Discovery Channel:

John: So, tell me about the cover image [“Kitty and Horse Fisherman” in the gallery above]. It’s so surreal, and a lot of people I’ve shown it to initially think it’s Photoshopped, just because I think we’re programmed to think that now for anything with a cat in an unlikely scenario. I’d love to hear how this image came to be.

Corey: My captain had cats on the boat in the past, and they disappeared for various reasons. Like, one got taken by an eagle.

Corey: Yeah. Another just kind of ran away when we got to shore, and stuff like that. But before that, he’d had a really good experience with a cat on board, so I asked him if I could get one. I was moving back from Norway to the U.S. at that time, and I figured after the end of the season I’d just take the cat home with me. So I went to the pound and looked for the bravest cat I could find. I opened the cage doors and the different cats, mostly they’d jump down and cower and be hesitantly walking around, but this cat, when I opened the door she jumped right out looking all perky. I threw a little toy and she just went crazily flying after it. I needed a cat that was fearless and would be happy out there. But that almost backfired because she was so fearless that loud noises and stuff like crab pots slamming on the ground didn’t faze her at all.

So in that photo—king crab season ends right around Halloween. So we always have Halloween costumes on the boat ready to go to the parties in town if we make it in time. So I had gotten a couple masks and we were trying them out to see how they look, while we were on the way in. And then the cat walked by, and he just picked up the cat and that was the shot.

John: I think it’s really a perfect photo for the cover of the book. I’m always drawn to photography that investigates our relationship with animals—I think it’s a really interesting way to explore human’s interactions with nature. And so much of not just your work and this particular book, but your entire life, is based on that relationship. So I think the cover is great in that respect.

Corey: I’m glad you noticed that because, yeah, I’ve always really been drawn to animal-human relations. I used to volunteer for a wildlife rescue center that was basically a guy’s backyard near my house, so I’d go there and I’d feed all these wild animals. But at the same time I had this hunter instinct, and I was shooting birds with my BB gun and squirrels and stuff, so I was killing them and nurturing them at the same time.

I’m really curious about what it means to be in the modern world with animals— everyone’s got a different idea on what the role of animals are in their lives.

And on top of that, the job, the work is so rough that everything is a joke to us—it’s a way of coping and trying to make light out of a bad job, like MASH did with war. So I think throwing humor in the series is important. It explains something that’s hard to explain. 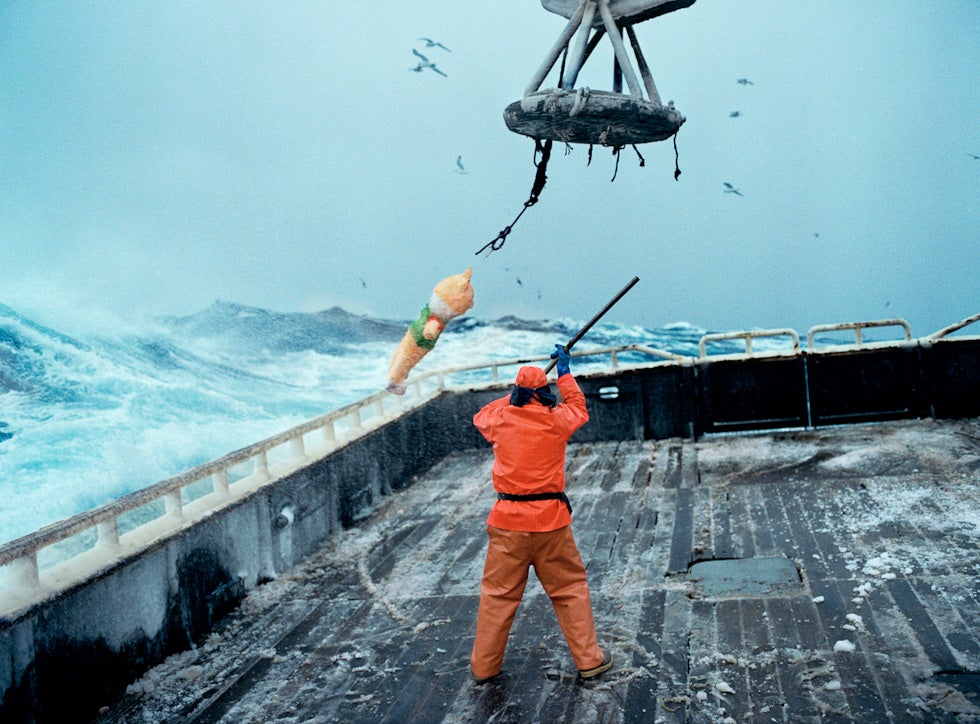 John: Yeah, you do a great job of showing the bubble of humanity passing through this very harsh, inhospitable natural world. I think the shot of the guy whacking the piñata on the deck is a great example of that.

Corey: Yeah, that’s one of my favorites. I’m always striving to do more of that, where I’m manipulating the situation and going for something that’s a little bit more than just straight documentary. I like to mix the documentary style with the surreal, where maybe I am setting things up a bit, but it’s still all happening within a very real scenario.

I kind of planned that piñata shot. But at the same time it was my friend’s birthday. He has his birthday on the third day of the season every year, so he’s always going to be working a crazy shift and he never gets to celebrate. I thought it would be fun to surprise him with a piñata. So yeah, that photo says something about how fishing is a seasonal thing, and guys will do things like miss the birth of their child back home, because there’s so much income to be made in such a short period of time. Everything stops; you have to be there.

John: It wasn’t filled with fish guts, was it?

Corey: It was filled with candy and plastic horses. Oddly enough we bought the piñata in Dutch Harbor–there’s such a big population of Mexicans working at the cannery, they sell piñatas at the supermarket in this tiny island town.

John: So, I was of course going to ask you about Deadliest Catch, and what your thoughts on that whole phenomenon are, and I was doing a little Googling and realized your boat was actually on the show briefly. What was that like? Did it make you think about your project any differently?

Corey: When I showed up in 2002 in the Bering Sea and started photographing, I decided I was going to make a big project out of this. And then, in 2004, all of a sudden you started seeing camera crews all around town, and no one had any idea what their intentions were. The first show was super low-budget, more like a true documentary. I thought it looked alright, but I also was worried, because I knew I was on to this world that people knew nothing about, and I’m thinking, “I’m going to be able to photograph here for years.” My goal was always to make a book. And I was thinking, you know, this is going to be so fresh and new. But then all of a sudden, Deadliest Catch was there. 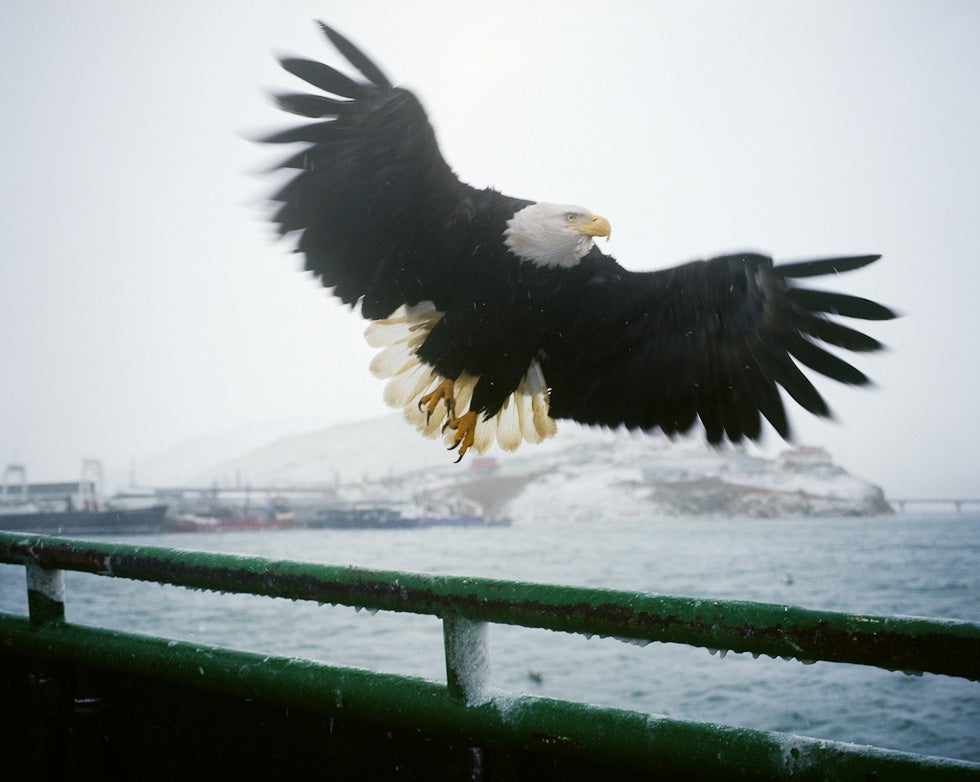 I was afraid they were going to commercialize it to the point that it wouldn’t be that fresh and new to people. But when I first started connecting with galleries and when I started posting the images online, most of [the gallery people] didn’t even know about the TV show, to my surprise. Maybe the Discovery Channel isn’t going for the city people, the art people—most of them didn’t know what it was. I was pretty happy when I realized it was still being recognized as an art project and not “oh, that’s Deadliest Catch” or whatever.

But once the camera crews showed up in town, I showed them the photos I’d been taking, and they actually started hiring me, and I did a lot of the ad campaigns for Deadliest Catch and licensed a lot of images to them for a couple of years. And even last year I did a huge billboard ad series for the UK version. So they kind of fed off each other but I managed to keep my personal vision and my project totally separate.

John: It’s nice that it became this sort of symbiotic thing, then.

You can pick up a signed copy of Fish-Work: The Bering Sea direct from Corey at fish-work.com.