Since the beginning of her career, Charlotte Dumas has been working with animals in her photography. To twist this sentence... 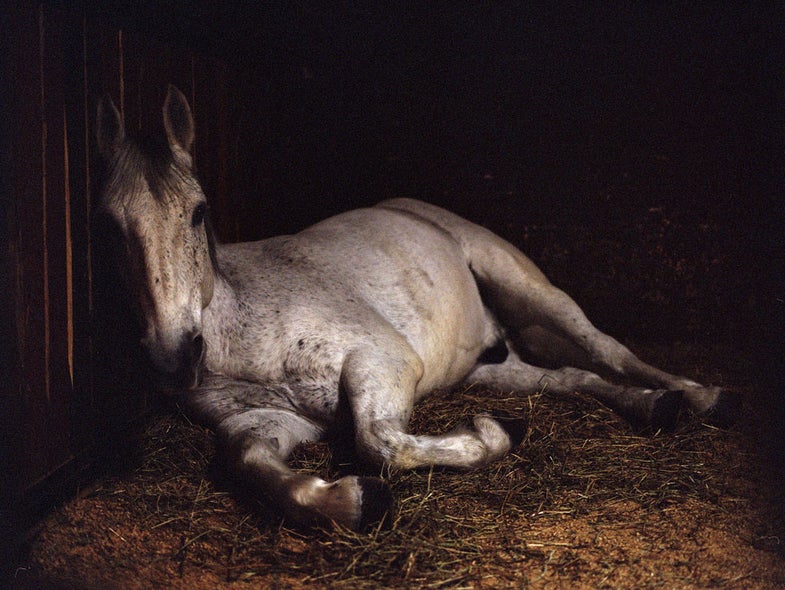 Since the beginning of her career, Charlotte Dumas has been working with animals in her photography. To twist this sentence in on itself, her photography is centered specifically on working animals—those that we depend on in a way that’s increasingly rare in 21st century life. Inspired in part by the intimate relationships soldiers have developed throughout history with war horses, Dumas’s pursuit of this theme has most recently brought her to Arlington National Ceremony, where she photographed the team of burial horses that carries the caskets of those members of the armed services buried with full honors. The portraits that became Anima_ were commissioned for a special exhibition by the Corcoran Gallery of Art in Washington D.C., and can also be found in a self-published book, one of our favorites of 2012. A special exhibition of_ Anima_ is also opening at Julie Saul gallery in New York this Thursday, where it is on view through March 9, 2013. We spoke with Dumas via Skype from her home in the Netherlands. _

In the text in the book, you mention there was more going on in these portraits than in your previous work with horses. What made this experience special or different?
Well, maybe it’s because I’ve revisited a subject I’ve photographed before. I photographed horses laying down in their stables for the first time in 2004, so I wondered if I still had the same enthusiasm to shoot it again, because sometimes if you do something, and then you see it again, you feel like you’re really done with it. But that was not the case. It was also a real challenge to me to see if I could go further. And in the end I did, but it was hard work at the beginning, because it’s easy to do what you already know. I’ve been photographing animals over the last 10 years, and horses especially. So I had to surpass my own methods and way of observing, and that took a while. But there’s always a magical point where all of a sudden the subject is leading me, instead of me trying to pursue a certain image. Each series starts with a certain image I have in my head, and I know from experience, as long as I’m still pursuing that image, something good hasn’t happened yet.

Was there a single moment like that with this series?
Yeah. One of the first times I went, I shot one of the key images of the series, called “Ringo”—it’s one of the horses that you see entirely, and he’s looking straight at the camera, and he’s the most awake. And that gave me the confidence to go on, because at first, I was doing a lot of stuff I’ve done before. Nothing was happening beyond photographing the horses in their stables, and it changed as soon as I started photographing these horses more like headshots. I came much closer to them, and that was something I hadn’t done before. 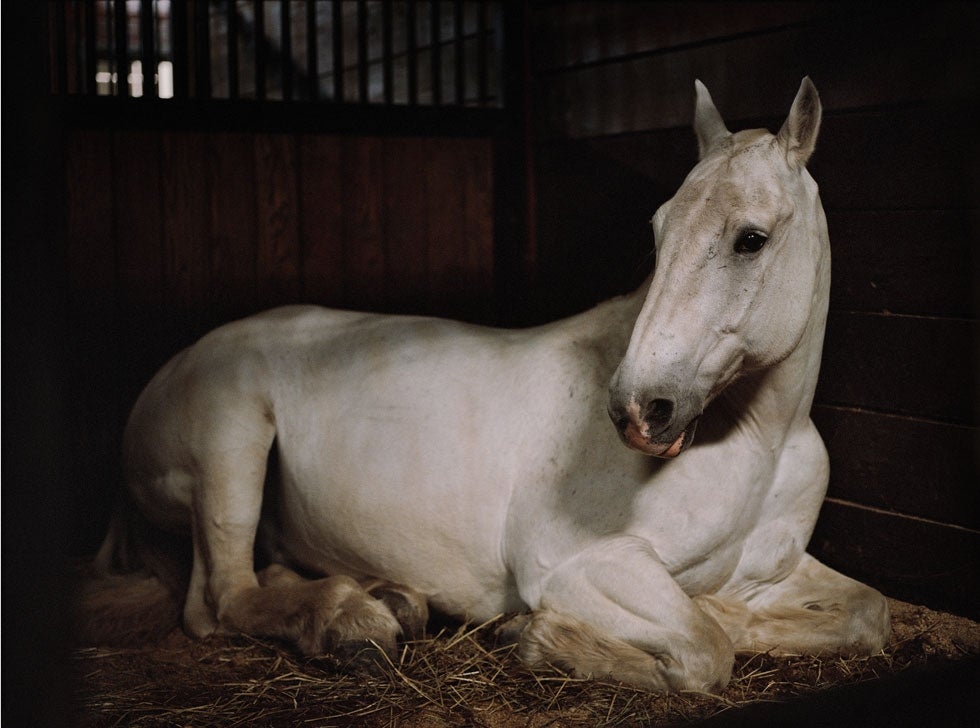 There is also a video element of this project. How does video work with the photos, and vice versa?
It took me a while to decide to do something with the video I had shot. I went [to Arlington] over the course of several nights, and near the end I was hardly taking any photographs anymore. I was just spending time with the horses as they fell asleep, and it was just so beautiful to watch that I decided to film it. It’s something I haven’t done recently, so, I really had to get some good advice, which I did. I had the material for four or five months before I made my first rough edit of the video, because I wasn’t sure that it would add something, of if it would just be moving photographs. In the end it turned out to be something really valuable to the photographic work as well, because the photos are these dreamy moments, and they feel very dark also. So when you see the horses actually fall asleep in the video—from the response I’ve gotten so far, people have rarely ever seen that happen. Aside from it being a kind of novelty, it’s really moving to see. A horse just laying down is pretty amazing already I think—it really emphasizes their vulnerability. But to see them actually lose consciousness and fall asleep, I thought it was really meditative.

It sounds like the video really matched your own experience being there, having stopped taking photos.
Yeah, that’s exactly what happened. And also, if you see the photos first, then you see the video, then you see the photos again, it changes the way you look at the photographs. And that was really important to me since I’m not a video artist, and I think it’s always kind of risky as a photographer to start filming because in the end, you’ll end up selecting and taking out stills again because you’re so used to working that way, so it was really important to me to seek professional help! I knew what clips I wanted to use, but I wanted to really get the flow correct, and not make it too long, because it’s a very quiet action that you’re watching. So far, it’s gotten a really great response, so now I’m feeling more confident in showing it.

Photography centered around animals has always appealed to me for a variety of reasons, and a lot of photographers often use animals to insert humor into the work, or make things a little more lighthearted. I like a lot of work that does that, but your photos always manages a more serious tone, which I think is interestg.
I’ve always considered my work to be portraiture, so in that sense it’s serious. I see what you mean, also, because for a lot of photographers, I think having animals appear in their photography is more to illustrate something else. It’s not that common to just have portraits of animals without something else. And for me, it just grew that way. It started out photographing police dogs, then police horses, and as it evolved it became much more apparent what it really meant to me to photograph these animals, because of course, they’re portraits of animals, but they’re really about us. It’s all about our relationship with animals, and also symbolically the relationship between two species, with the human species being very solitary in this world and needing the animals, basically. And it’s about the diminishing existence of animals in our daily life, because they don’t work so much anymore like they used to. We don’t need them like we used to. But I think [not having closeness with animals] also takes away a large part of how we process things around us. Animals are very important for us to experience the way we live, without always having to relate to one another.

I think that’s why a lot of people have pets, too.
Yeah, absolutely. The gap is becoming much greater as time goes by. Of course some people put animals on pedestals, or we use them as meat in the food industry, but that middle section that used to be very broad, where animals and humans can depend on each other and work together—that’s disappearing. I think we understand animals much better when we know what they’re capable of. I found in my work in the past that policemen working with police horses, or even a tiger trainer working in a good circus have a much better understanding of what these animals are about.

But also the more experienced I get, I think my subjects tend to become more engaged with the world. And I think my two recent subjects (the rescue dogs of 9/11 and the Arlington horses) really entwine with the events in the word of the last decade. Without stressing it too much, I think it shows that the animals are on the outer end of our emotional experience of these events, and how we need them and use them to catalyze this emotional response. There is definitely a much broader and stronger current underneath, now. In that sense it’s interesting, and it still motivates me to continue.

With something like the working dogs of 9/11, it does give people a way to experience a really powerful emotional event that’s one layer removed from the human experience. You’re still seeing it through the eyes of a living thing, but it removes the human element from it in a way that’s really powerful.
Yeah, we are very much in need of having animals around. There’s so much stuff happening in our lives even on the micro level, and I think you really benefit from having other living creatures around. Children can do the same thing in a certain way. But they suffer like us; animals suffer differently, and there’s always something that we can’t quite grasp, and that makes it both frustrating and desirable at the same time. There’s so much mystery, and it’s never really solved.