Books of the Year: Brian Ulrich’s “Is This Place Great or What”

Brian Ulrich‘s Is This Place Great or What (Aperture) tells a story familiar to just about anyone living in this... 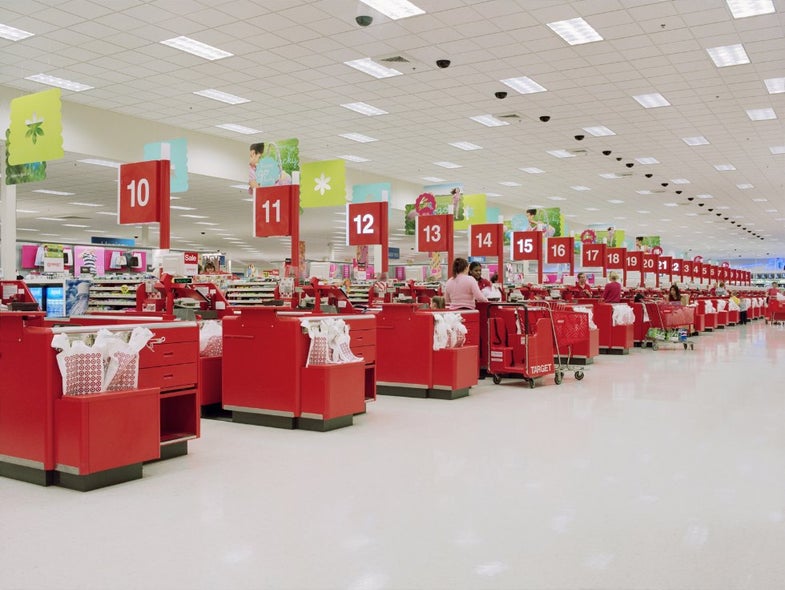 Brian Ulrich‘s Is This Place Great or What (Aperture) tells a story familiar to just about anyone living in this country in the last decade. It’s the story of stuff—_how we buy it, where we buy it, and what we do with it when we don’t want it anymore. When George Bush instructed the nation to keep shopping as a patriotic response to the shock of September 11, Ulrich began taking the photos that would be come Copia. The project’s three parts—_Retail, Thrift and Dark Stores (samples from each in the gallery above) come together in Is This Place Great or What as a complete narrative of the last decade, full of consumer decadence, disgust, and collapse. Together, they do what art does best—make us take a look at ourselves in a new light.

John: To start I was hoping you could tell me a little bit about your process for taking these photos. It had to be interesting, since most big retail stores tend to discourage photography inside.

Brian: This all sort of clicked after a long day in a Home Depot—I ended up just sitting in an empty chair for the security guy by the exit, and it became a really interesting backdrop for a picture, watching as people kept coming through there with their carts. 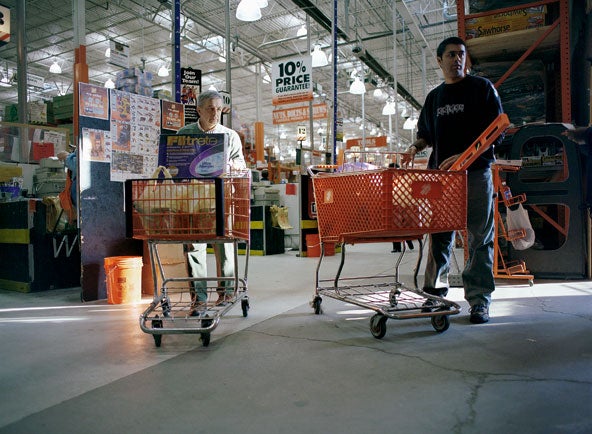 I realized that, instead of following people around or trying to be sly and sneaky, I could just camp out and wait. It was almost more like fishing or doing anthropological observations. And the other nice thing about that is I become almost like furniture as well. I’m in that space for so long, people aren’t going to necessarily second guess why I’m there. So as much as what I’m doing is in the tradition of street photography in a weird kind of way, I thought it would be a lot more interesting if I did something a little bit different.

Did you have any showdowns with security?

In the beginning I was really quite surprised that I didn’t get grabbed by the collar and thrown out of the stores. Strangely, it was really kind of the opposite. Maybe it was because I was staying in one space rather than running around. But people either didn’t seem to notice, or didn’t really care. It was really kind of wonderful. If someone did come up and say anything, they’d be extremely polite about it. I realized that they didn’t want me to have any ill will toward the store, because I might buy something.

One time, though—ironically it was a Best Buy employee who got really aggressive. Which—I guess is the case every time I’ve gone into that store, whether it’s for sales or for taking pictures [laughs]. But this guy was really insistent, you know, saying the camera can’t be turned off, it has to go away.

I find that there still is this weird distrust about photography that exists in the culture, and it just continues to grow. It’s so strange. It doesn’t matter if it’s an 8×10 camera or an iPhone—people are still weirded out. 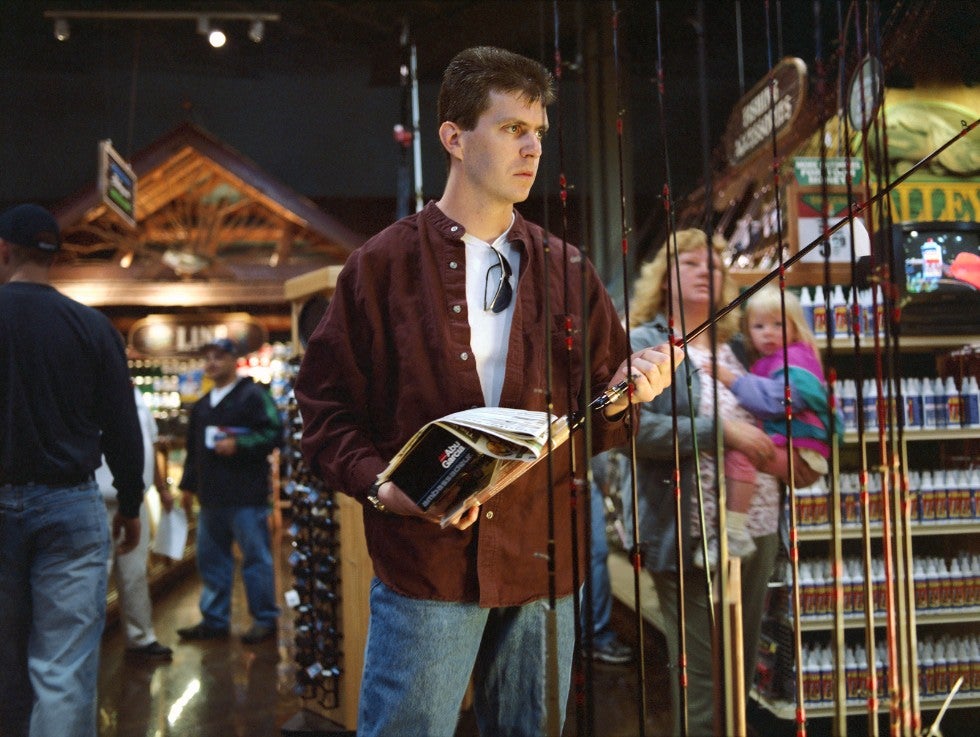 Definitely. For me, it’s often hard to overcome that shyness that develops when you’re photographing strangers, because you just assume that people think it’s creepy that you’re photographing them, or that they see it as a violation of their privacy, or that everything’s going to end up in some weird place on the internet…

And all those things do happen! My project is of course an example. I wouldn’t necessarily say it’s creepy, but, it is important to understand that when you’re out in these places making pictures, it’s not really normal activity to everyone else. The frustrating part, though, is when somebody sees that and decides its their job to remind you it’s not normal activity. I mean, it’s one thing to say “no pictures, no big deal” but it’s another thing for somebody to make you feel like what you’re doing is wrong.

I want to talk about the empathetic nature of these photos. You’re definitely not photographing these people in stores as some kind of “other,” and I like seeing the images work in that way, revealing a different side of this rote activity that is a part of all of our lives.

The impetus for the project was out of a simple curiosity, and a slight disbelief in the fact that [after September 11] shopping was now some kind of patriotic duty. But I quickly realized that it was much, much bigger than that. The fact that you’re not supposed to make pictures in these places, simply because it allows you to have this critical analysis of the space, is really interesting to me. Just by taking the picture in this place, it becomes a very political thing in and of itself. It allows us to distance ourselves from the phenomenon, and analyze it in a pretty heavy way. Right off the bat you see the whole fallacy of the thing—all of the weak gimmicks that are in place. You start to realize “Oh, well, that’s really strange that they’d put this thing on the end cap and have a deal for $9.99 as a price point for ideological goods.” When you’re in the store and consumed (pun intended) in the activity of trying to find that thing, it’s impossible to look at the whole process critically. It’s why the gimmicks are effective.

That’s what’s exciting to me about the work, is that it allows you to scrutinize the whole spectrum of this whole thing. And then of course our place in it. 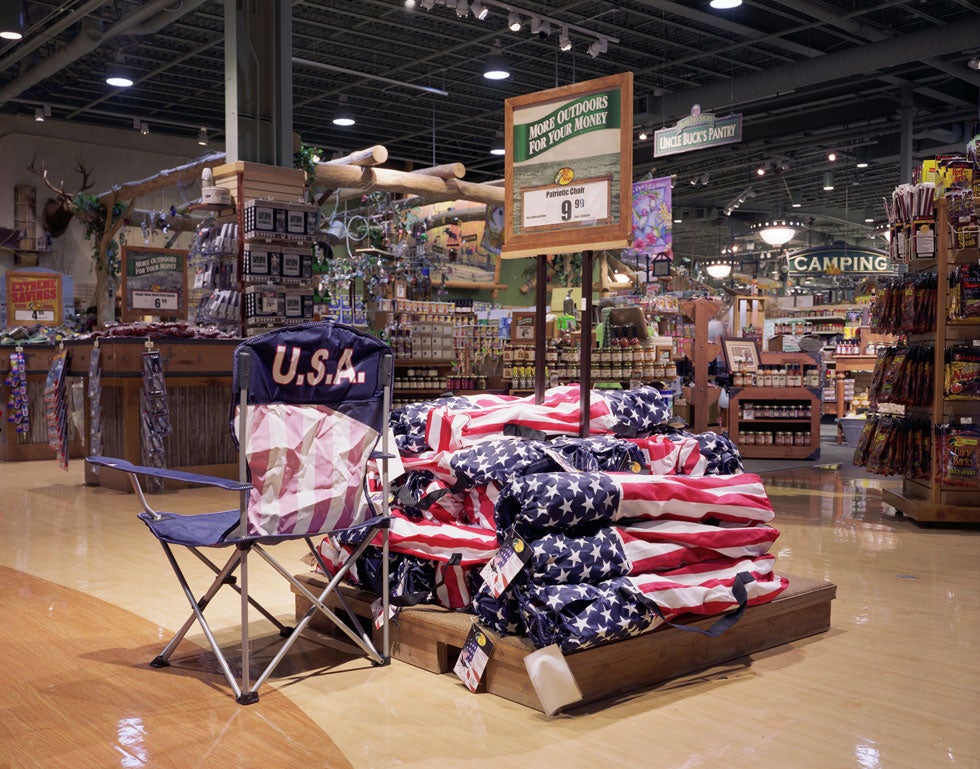 It’s very clear that you’re placing yourself within this context as an American human being too.

You can’t necessarily ask people to have a critical discourse about something that’s making fun of them. It becomes such a didactic argument, and we see it fail miserably all the time in the culture. We all exist under this umbrella—everybody buys stuff. But if we don’t take the time to think about what’s implicit in this equation, that’s when it seems to get scary.

You must have spent an incredible amount of time in these places. How did you keep from going insane?

People ask me that quite often. And it is, really, really weird. Luckily I have a pretty good sense of humor about the whole thing. And then of course I’m there to work. It doesn’t matter what’s happening around me really, I’m just trying think about photographic problems, and solve them.

But the one time it really did have a huge effect was the day I spent about six hours in the American Girl store in Chicago [laughs]. I definitely got to a point where I felt like reality was slipping away. There was such a frantic energy in that place, and so much of the same activity happening over and over. I started thinking to myself, “I’m not really sure that I’m alive.” It was like an episode of Star Trek, where you see these little girls holding these plastic versions of themselves, running around getting haircuts together—yeah, it was difficult to fathom. 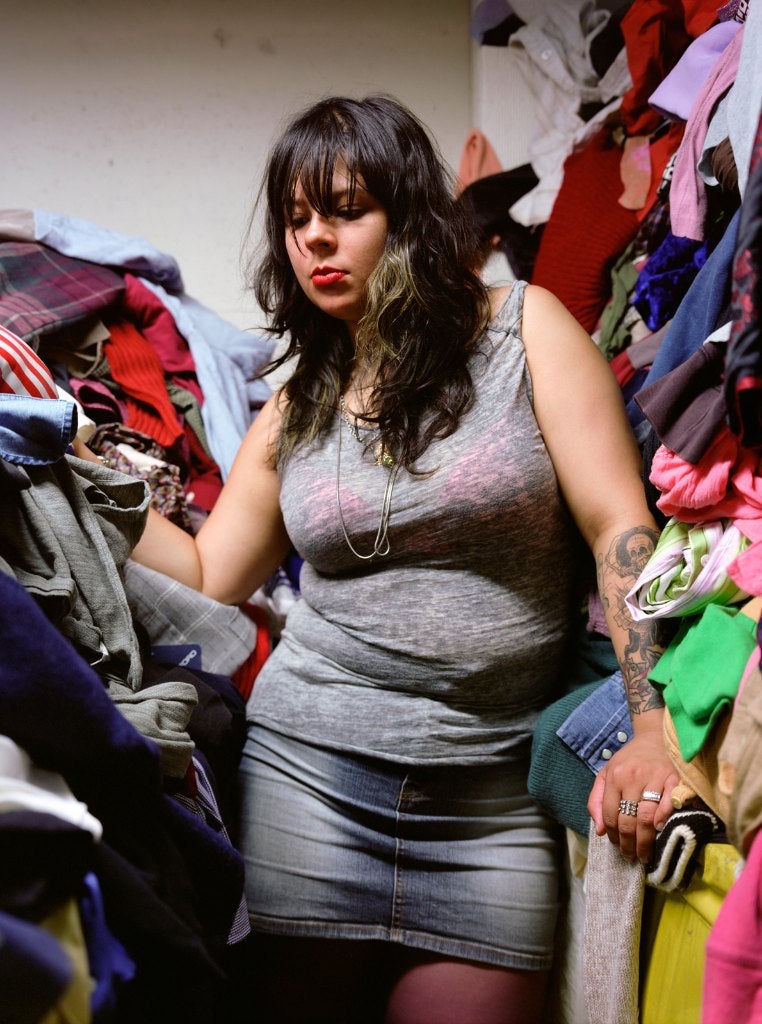 It’s obvious to see how the Thrift images serve as the next phase in this whole cycle. You mention in your notes in the book that making those photographs was also pretty intense.

Thrift stores are equally bizarre and overwhelming. The photo that’s on the cover is from a thrift store in Seattle, of a girl in the store’s basement. Throughout the basement are these various chutes in the ceiling, and as she’s working trying to sort the mounds and piles of clothes, these giant flops of clothes will drop out of the ceiling at random times. She had strategically figured out where to stand and where not to stand. But unfortunately I hadn’t [laughs], so I spent a lot of time dodging the laundry shoot. She’s literally swimming in this stuff, and to her it seems kind of wonderfully effortless. She was listening to music and rocking out, and this was just her space. It was such a bizarre experience to stand there and witness, and try to photograph.

It’s like the trash compactor in the Death Star in Star Wars.

[Laughs] yeah, exactly like that. Squeezing in on her, and all of us, right?

There’s just so much stuff.

The rampant manufacture of things has been such a twentieth century concern. “If we just make more stuff, people will buy more stuff.” Then you factor in the idea of planned obsolescence, and we have a really profoundly amazing amount of things staring at us. And that was the thing I kept coming up against in the thrift stores—even if you went to the smallest places, they’re just packed to the roof. All the thrift stores I contacted could totally understand why I wanted to come and make pictures there, because there was just so much. They’d say “Oh, come on Tuesday, because that’s when it’s literally to the roof.” There were times when I could literally climb piles of junk to the roof of a two story building.

I worked on Thrift for three years, and towards the end of the project, the plight of the whole idea was so big that it started to feel extremely difficult to try to render it into images. I was in this Salvation Army in Chicago photographing this guy loading mattresses off of an elevator. And it was the summer, so it’s super hot, and he’s struggling with these giant things. It was just this moment where I didn’t know how to make a picture of it. It was too overwhelming to try to capture the experience. That was a “time to move on” moment. 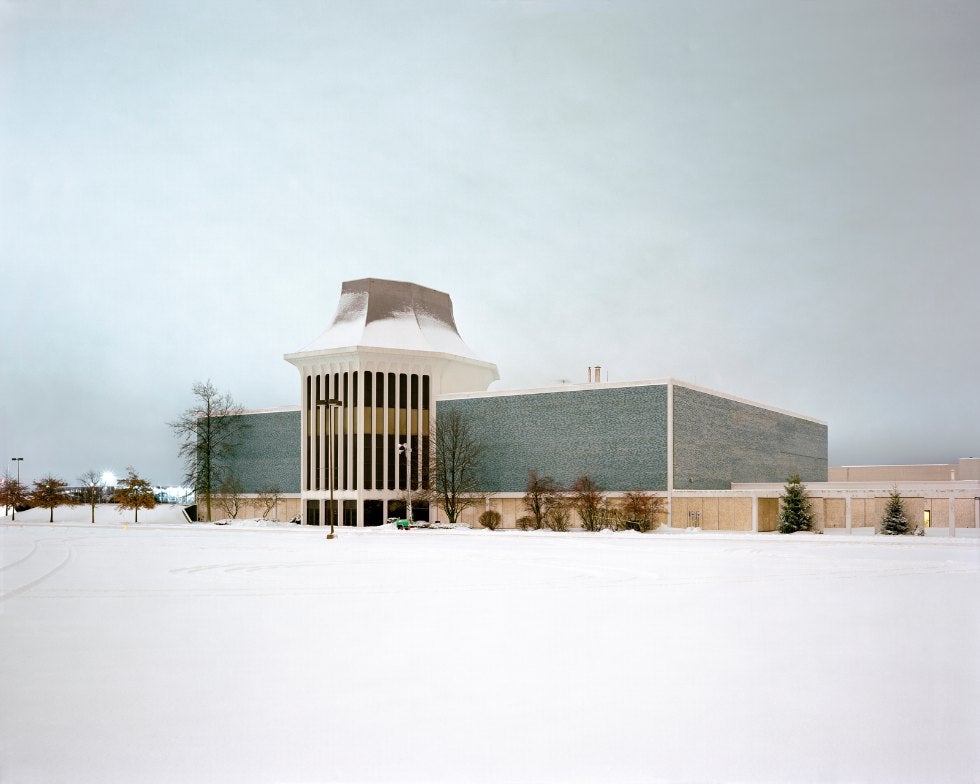 And then we come to Dark Stores, looking at the empty shells of former retail spaces that have since closed. I was hoping you could speak about the photograph of the mall, the one with “After Stephen Shore” in the title. That seems like a prescient pairing.

I was searching on Flickr, and came across pictures of that Lazarus [a department store chain that has since been bought out by Macy’s], and it immediately struck a bell—is this the Stephen Shore building? And it was. I pretty much just packed everything into the car, and drove about eight or nine hours through a blizzard to get to that place to make the picture. It was kind of this perfect moment, thinking about what Stephen did, and where he stood, using more or less a similar camera and lens, and trying to get into the same location. But then also thinking about how he was photographing at the dawn of this idea, and then of course, that it was called Lazarus, and it won’t necessarily rise again.

Yeah, I actually wanted to ask you about that. How Stephen Shore and his peers in New Topographics were interested in this encroachment of man-made commercial spaces into the natural world, and now, you’re showing us how nature is reclaiming many of these places decades later.

Yeah, that was one of the reasons I started using the 8×10 camera for the Dark Stores pictures, making reference to those photographers. Now the whole thing is in a different state, and has various levels of nostalgia and sorrow built in. There are all these new civic problems built into what to do with the places now. And of course they’re mired in the same kinds of greed and lack of responsibilities that created them.