Anup Shah’s Serengeti Spy (Abrams, $40) takes one of photography’s most established genres–wildlife–and turns it on its head. By using... 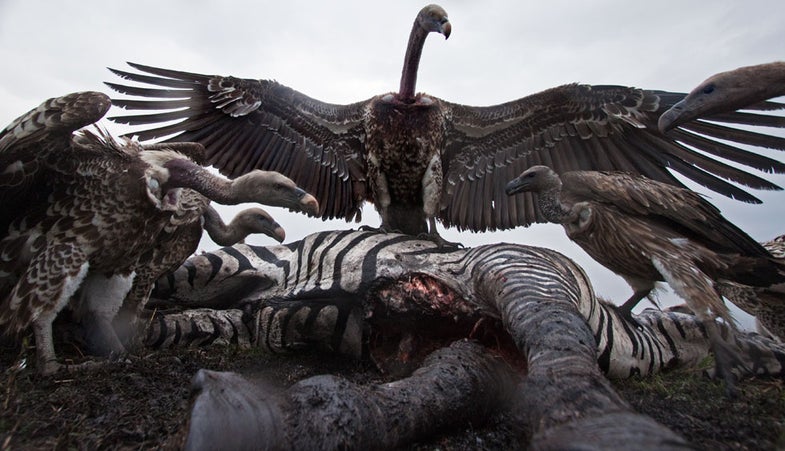 Anup Shah’s Serengeti Spy (Abrams, $40) takes one of photography’s most established genres–wildlife–and turns it on its head. By using a remote camera that can be zoomed, panned and the shutter triggered from a great distance, Shah offers an unprecedented view into the lives of the animals of the East African plains. While traveling in Kenya, Shah answered some of our questions via email about his fascinating process.

Of course, I’m really interested to know more about your camera setup. Could you describe how you make these captures?
When it comes to shooting wide in wildlife photography, there is a difficulty: you need to get low down as well as go wide, given that the height of most animals, if not all, is on the short side. Planning each picture was a lot of fun but fraught with uncertainty. The camera would be camouflaged with vegetation, mud, and even elephant dung. I would place the camera where I thought there was a good chance of an animal passing by or lingering. Then it was a question of waiting. More often than not, the animal did not turn up.

The image from the camera was viewed from the safety of my car, parked up to 100 yards away. The shutter was remotely tripped at the moment of my choice.

It was not easy to build a unit that not only did everything a person can do photographing lying down on the ground—like changing the angle of view by zooming, swiveling, or moving the camera—but to also see the view on a TV screen in my parked car and release the shutter at the moment I saw the right composition. In addition, the camera needed to be housed in very tough material. So the whole thing turns out to be bespoke.

Do you use anything to lure the animals to the camera?
Absolutely not, although I believe I am in a tiny minority of nature photographers here. However, my principle is simple and solid—animals come first, not the photograph. The effect of luring an animal, with bait for example, is to make the animal dependent on humans for food and to upset its natural habits of foraging, routine, rhythm, and functioning. 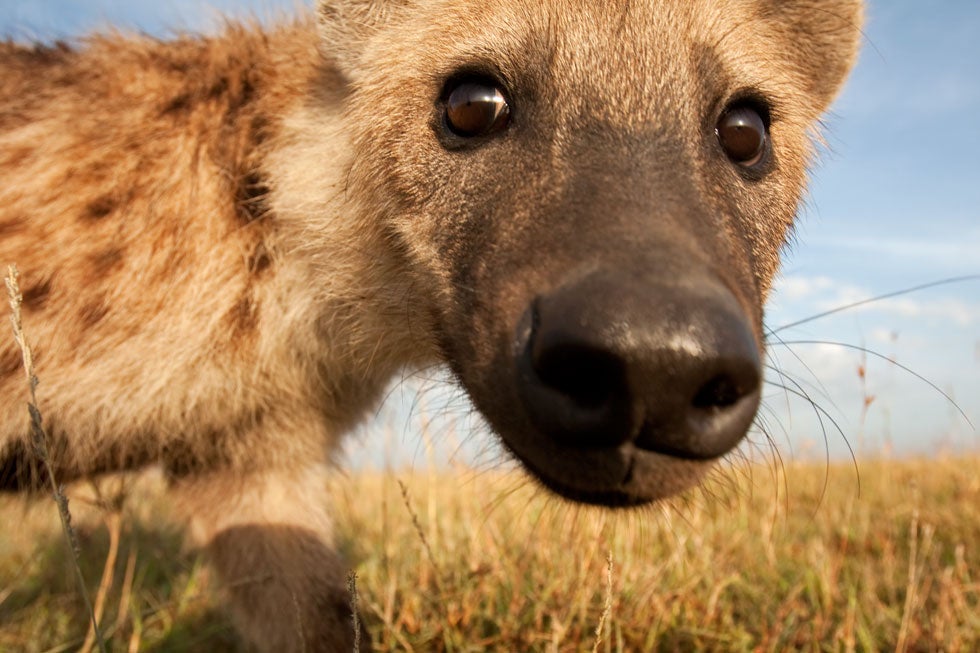 Are you waiting within sight of the camera? How do you pass this time?
Some of the time, for example when I have placed the camera in a gully, I cannot see the camera. However, the image as seen through the hidden camera is on my TV screen in my car. Sometimes I wait for a few minutes and sometimes the whole day. I am afraid there is no precise answer. In the wild, things happen and change unexpectedly. I pass the time observing and thinking. When the brain gets bored, I dip into a non-fiction book or article.

How do you select your locations?
The shots in the book were taken on the plains of East Africa. Fortunately, I am quite familiar with this area and its wildlife. The trick in selecting locations lies in knowing the habits of the animals, that’s all. Thus, in the dry season, I know of waterholes the thirsty animals will travel to; in the fruiting season, elephants will head for the fruiting trees I know of and so on. Of course there is serendipity too, like finding a carcass.

The photo of the vultures on the dead zebra is one of the most arresting wildlife photos I’ve ever seen. Can you describe the circumstance of this image? Did you set up the camera near the fallen zebra hoping to capture a scene like this?
I came across the zebra carcass the previous afternoon. It was intact, without any bite marks. Expecting the scavengers to notice it, I set out very early the next morning. It was drizzling and the light was dim. I thought that the setting was like a scene from hell. It just needed a vulture to perch on the carcass with a few other vultures in attendance to complete it. But first there was the problem of a hyena feeding on it, keeping the vultures at bay. After a while, the hyena moved off, the vultures moved in, and all I had to do was to compose and release the shutter.

You’ve captured images of so many species—I bet you’ve noticed some interesting differences in how certain species behave around the camera?
That’s an interesting question. There are times when the animals spot the camera and the “observer effect” will kick in. Reactions vary over species. An elephant will smell it by extending its trunk and satisfied that it is harmless, will move on. A lion cub drawn by curiosity but pulled back by fear will snarl at it to intimidate the camera whereas an adult lion may just bite it. A baboon will be fascinated by the image reflected in the lens and try to figure out the baboon stranger.

What was your goal in making these photos? What do you want viewers to take away from them?
I wanted to put the viewer inside family groups, herds, and come face-to-face with a wild animal on its terms from the comfort of a sofa. Thus the images in this book attempt to invoke feelings—specifically what it feels to enter the lives of wild animals via their private space, and thereby to feel a world probably felt by hunter-gatherers and our ancestors. Hopefully, the viewer will also establish some sort of connection with the animals. An unexpected by-product has been that the book has jolted the staid and tired wildlife photography that we have been accustomed to, and made nature photographers think about what they are trying to do.

You can see the rest of our 2012 Books of the Year package here.