Books of the Year: Altered Landscapes

As it’s commonly understood, landscape photography is the practice of representing the unadulterated beauty of nature through an image. Think... 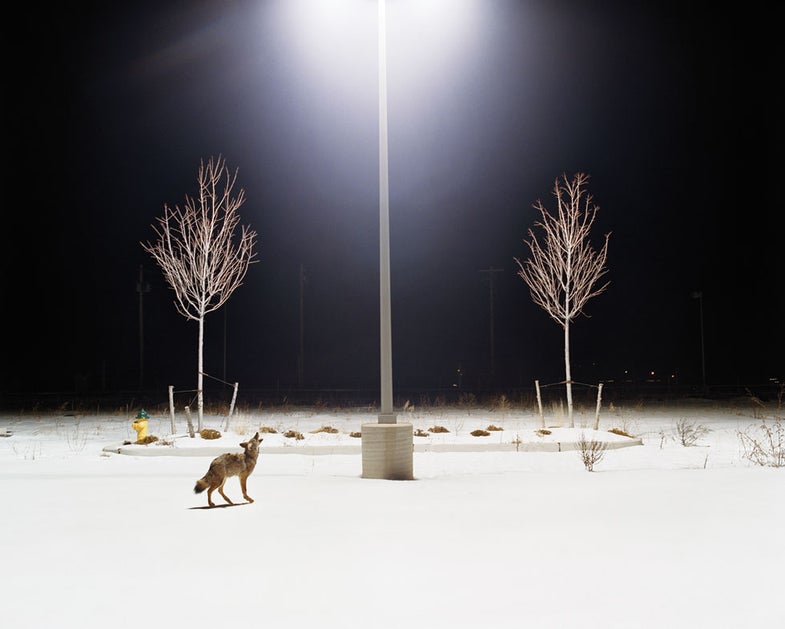 As it’s commonly understood, landscape photography is the practice of representing the unadulterated beauty of nature through an image. Think of a pristine mountain range shrouded in early morning fog, or a peaceful meadow without a human being in sight. In Altered Landscapes, one of our books of the year, we sometimes see meadows and mountains, but they’re not presented to us only as images of beauty. Instead, they reflect how the environment has been changed by humans—often for the worse. As the book announces at the very beginning: “Humans rarely appear in the photographs that comprise the Altered Landscape Collection, yet their presence is undeniable.”

Many of the photographs in Altered Landscapes use the precise and straightforward gaze of earlier landscape photographers. These deadpan techniques amplify the power of the negative effects of humans. Mark Klett has taken this a step further, actually re-photographing landscapes that were originally shot more than 100 years ago, showing the differences that emerge. One of the book’s strong points is that it offers readers any number of ways to explore further, whether it’s the treatment of a particular issue (mining, tourism), the work of a particular photographer (there are over 120 in the book), or an artistic movement as a whole (New Topographics, Land Art).

The book is published Rizzoli with Nevada Museum of Art, entirely from the museum’s permanent collection. We spoke with Ann Wolfe, Curator of Exhibitions and editor of “Altered Landscapes,” and heard about Ansel Adams’ own geographical alterations.

Dan: I’d like to start by speaking generally about this book. It’s obviously very wide-ranging, but at the same time I think there are some specific ideas behind it.

Ann Wolfe: This book commemorates the Altered Landscape photography collection, which is a signature collection of the Nevada Museum of Art. It was first developed in the late 1990s, and it now consists of about 1000 photographs. The book and the exhibition that accompanied it highlight about 150 photographs from our permanent collection, which is thematically focused on human interactions with natural and built environments. I think it’s safe to say that, for reasons that are both natural and man-made, we live in an era of rapidly changing landscapes, and that all of these photographers are grappling with the realities of that alteration. These alterations take many forms, and those are themes and issues that emerge throughout the book. Some of these themes might be water use, mining and military installations, nuclear testing and its effects, or suburban and urban land use and development. Most broadly, the images address how humans mark, build and live upon the land.

When looking at the work of someone like Edward Burtynsky, it’s very tempting at first to think, “this is a beautiful image. “ Then you look more carefully, and you realize that it’s showing these terrible effects on the environment. How do you reconcile those two reactions?

I think it’s very easy to be taken initially by the beauty of many of the images in this publication, but I think one can look to the art historical traditions of the sublime to see that artists have been grappling with this for centuries—dealing with that tension between beauty and horror, or beauty and tragedy, and what may appear as the inconsequential role of the human in a lot of these images. I think it’s a healthy tension that’s been explored by many artists and photographers over time. 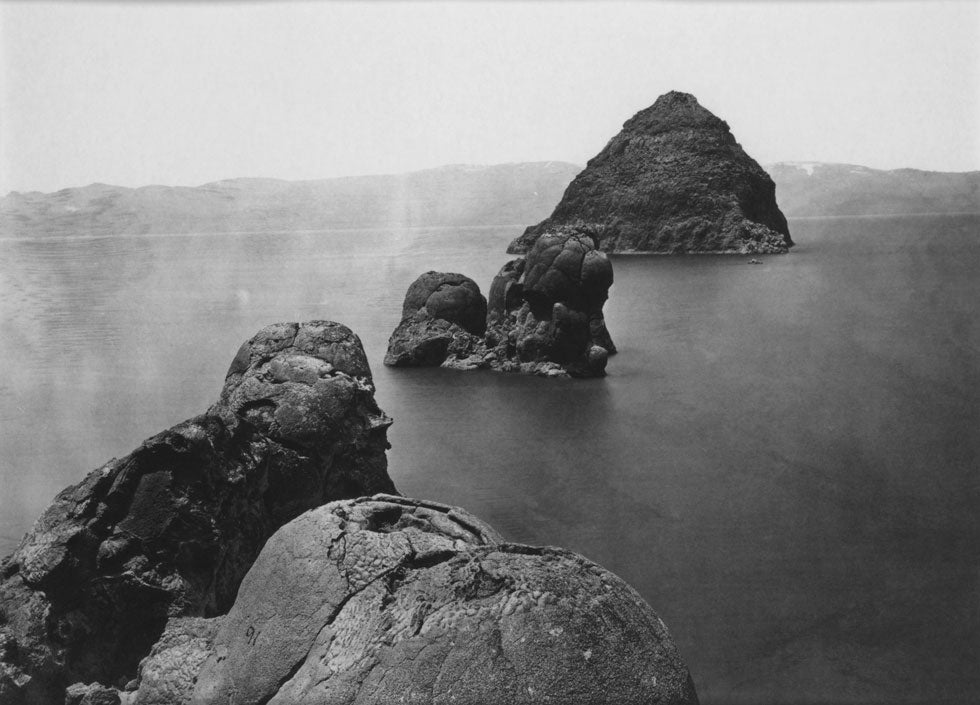 One of my favorite spreads in the book is the Timothy O’Sullivan photo and the re-photograph taken by Mark Klett 120 years later. What does the future of this field of photography hold?

One of the most interesting trends taking place in photography is the movement away from just the singular image to more project-based undertakings. I’m very interested in photographers who are taking on particular issues, or place-based issues, and exploring them in an interdisciplinary way. It’s moving beyond the creation of the singular photograph towards creating more research-based projects. Mark Klett is a good example of someone who has been an innovator in that field. 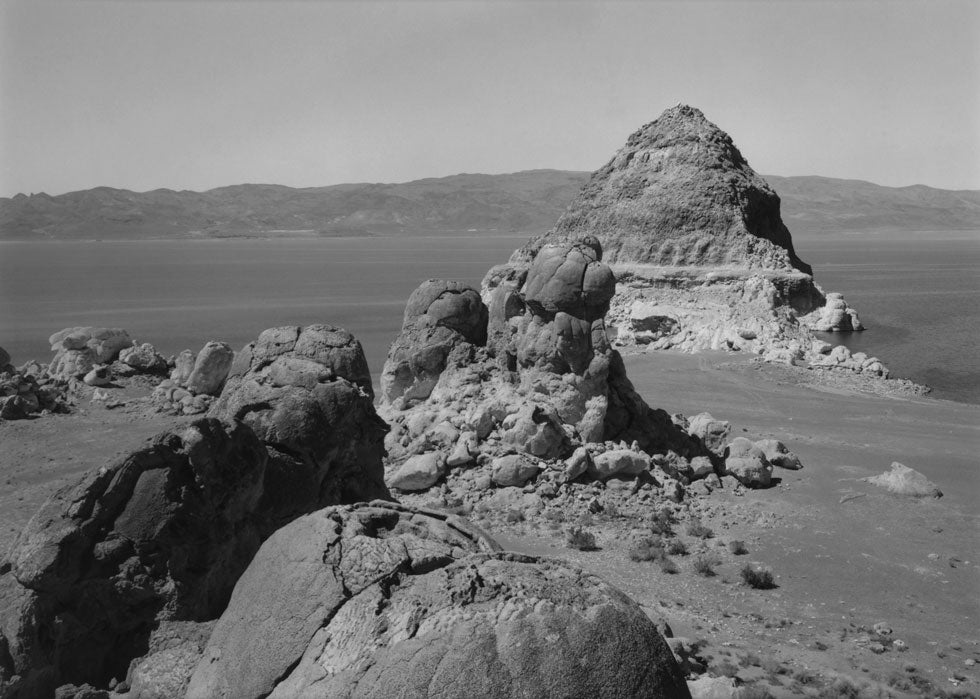 I also wanted to bring up Ansel Adams, because he shows up in one image, but I feel like his prese absence in the book might be more powerful in the way that he’s not present in the book. There are a few photographs that reference him. Half Dome appears twice, but not in the beautiful way that most people might think of it. The Lewis Baltz construction image from Reno also looks a bit like Adams’ “Moonrise.”

The Ansel Adams image is the earliest photograph in the book, it’s from 1944, and it’s really offered to provide some historical context. What most people don’t know about that image is that it is taken from the Southern Sierras, from Lone Pine, which is down near Mount Whitney, and that Ansel Adams went to great lengths to eliminate a large letter-form on the side of that hill—the letters “L.P.” which stood for Lone Pine. In the darkroom, he manipulated that negative to erase the human alteration that was visible in the actual landscape—which is what he did in many of his photographs. So in many ways, that image signifies the human desire to hide or eliminate human marks on the earth that are actually there. That’s one of the reasons that that particular Ansel Adams photograph is so important to the collection.

Baltz has been pivotal to the paradigm shift that occurred in the 1970s, not just with the New Topographics photographs but, also the Dusseldorf school. What you see in this book is that these schools gave rise to a new generation of photographers who view landscapes as a suitable place for social and political inquiry, and that in itself is a really important movement in photography.

I imagine if you tell most people, “here’s a book of landscape photographs,” they will expect to see something like Ansel Adams, but the photographs in this book are depicting a much different reality. Is it still possible to look at beautiful and pristine images of landscapes in the same way?

For the general viewer, or for me? [laughs] I think, or at least my hope is that, after one experiences this book and the images in it, that, no, you probably can’t look at a more conventional landscape photograph in the same way again.