In Courts, his first book, Australian Ward Roberts offers a masterful study in composition and color. His subjects are the... 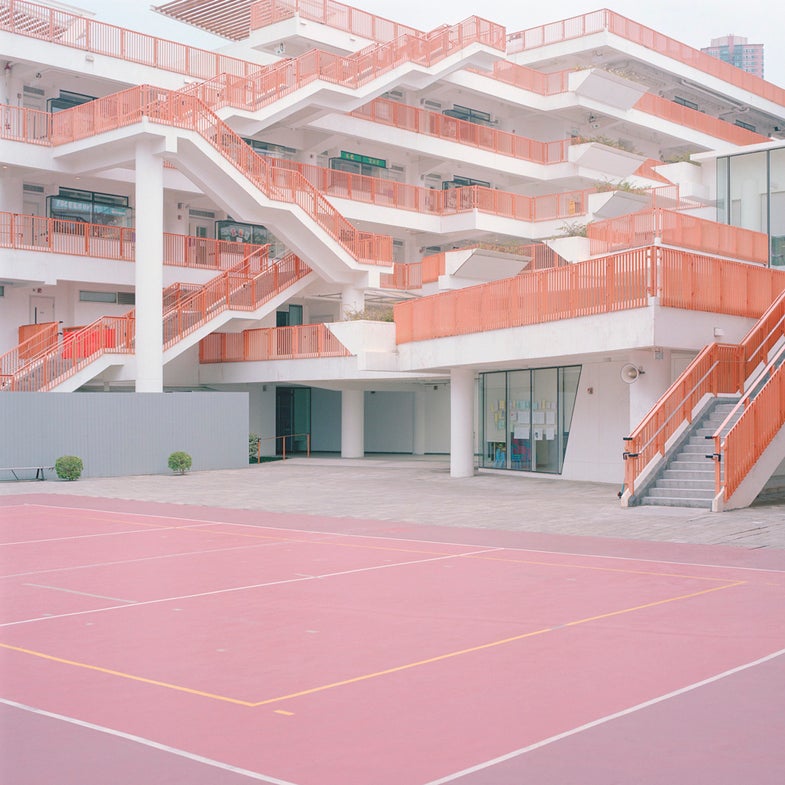 In Courts, his first book, Australian Ward Roberts offers a masterful study in composition and color. His subjects are the public places dedicated to outdoor sports and games. Secondarily, Courts is also a portrait of six cities. Shot in his native Melbourne, his childhood home of Hong Kong, as well as New York, London and Bali, the cities and their unique characteristics play a prominent role.

The star is Hong Kong, where Roberts grew up and went to school as a boy. The city’s schools are often brightly color-coded, with each grade level assigned its own color. Strongly muted pastels (A contradiction! But a truth here—pastels have rarely been so bold) are the dominant palette, with Hong Kong’s smoggy skies filtering the light until it’s soft and fluffy.

In fact, there’s very little overt sunshine in these photos. And zero people, for that matter–two things one might associate with outdoor play spaces. Over the course of four years with this project, Roberts collected images of courts in use in addition to the empty spaces we see here. In describing the project’s conceptual backdrop, Roberts draws a conclusion from the empty outdoor courts he encountered: that their emptiness is a sign of neglect from a more sedentary, plugged-in, indoor society.

But to me, all we see is beauty. It’s hard to glean a story of societal neglect or misdirection from the gorgeous collisions of line, symmetry and color that Roberts focuses on here. Interestingly, when it came time to edit, he says that any people, however tiny in the frame, inevitably became the focal point of the photos of inhabited courts.

Humans are eyeball magnets in photos. And in their absence, the first thing we often find ourselves doing as viewers is creating a human story outside the bounds of the frame. With the players edited out of Roberts’s courts, our mind has to wander a bit further. Mine ended up with the men and women who may have dreamed up these places, colored them so fancifully, and nestled them just so among the landscape of their cities. Bravo to them, and to Roberts for celebrating them here.