Books: Ward Long’s The Day My House Burned Down

One morning in January of 2011, Ward Long woke up before dawn to find the Los Angeles home he shared... 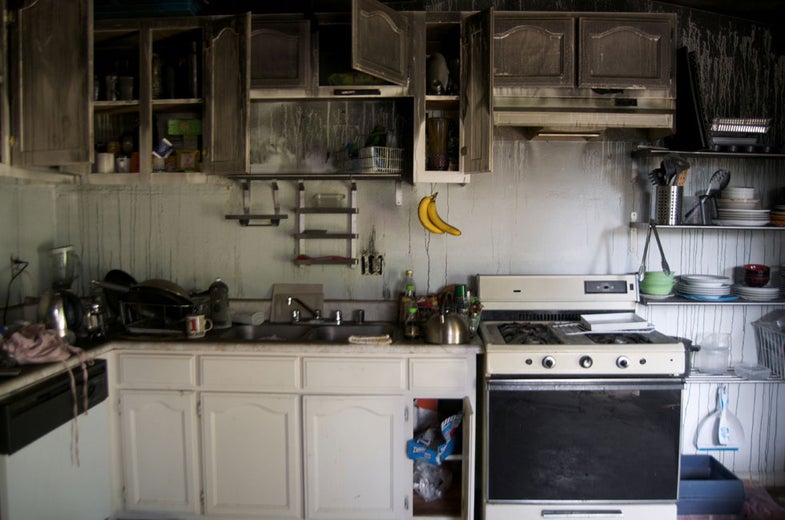 One morning in January of 2011, Ward Long woke up before dawn to find the Los Angeles home he shared with four other roommates immersed in flames. Everyone made it out unharmed (except, sadly, for one of the roommate’s cats), but as anyone who’s gone through an ordeal with a house fire knows, the story continued well after the smoke cleared.

In his photography, Long was already interested in the intersection of autobiography and the latent power of physical spaces, so it was natural that the loss of his own home to fire would become fertile ground for a new project.

Situated on a conspicuous hill in Echo Park, the house already had a certain infamous presence in the neighborhood before Long moved in. After the previous group of roommates broke up “somewhat acrimoniously,” the real estate broker who initially showed the house mentioned that Beck may have once lived there, and that Vincent Gallo used it as a set for one of his films. But it wasn’t just its touches with celebrity that colored the house’s reputation.

“People would say to me ‘Oh, you live in that house? I heard a girl committed suicide up there,'” says Long. “One person who used to live there told me people would always knock on the door thinking it was still a group home, and people fresh from jail would show up. It was like we were living on this haunted burial ground for rehab and failed indie rock bands.”

Looking at the straight photographs of the house before, during (by way of screengrabs of a neighbor’s posting to YouTube) and after the fire, an underlying sense of foreboding may not register immediately. But like any traumatic event depicted in photos, truths can lie beneath the surface, ready for different interpretations. And for Long, this became a powerful, somewhat mysterious narrative underlying the trauma of the event. “I brought some people over [after the fire], and they had said something like “Ward this place was definitely cursed, this was inevitable. This was going to happen.” In ruins, the “stupid crap of our degenerate lifestyle” took on a more ominous meaning for Long.

Several photos from the middle of the book showing the immediate aftermath of the fire Long took with a disposable camera he’d stashed away in his car, ironically, to document damages for insurance adjusters in the event of an accident. With several of his roommates out of town, Long returned several times to the house as it changed and further collapsed, making additional photographs.

“Ruins are always interesting, because photographs of them speak about memory, and impermanence, and they add a little mystery, and all of those things are really appealing to me,” he says. In fact, in a past project “611 Levering,” Long explored similar themes in documenting the ongoing ruination of a home in a college town that went from partied-out frat house to homeless squat.

“I would have been less interested in [ruins] had I known it would happen to me. If I knew that the things that I was interested in were going to happen to me, I may have been more interested in more cheerful things,” he jokes. But ultimately, the images that bookend the narrative, depicting the view from the house’s back porch before and after the fire, suggest that life, in fact, does go on.

For such a simple, straightforward, personal narrative, a book was the only natural output for Long’s project. “I really enjoy the narrative aspect of photography,” he says. “I see a lot of movies, I read a lot novels, and that’s the way I try teach people things with my work, I guess. It’s so much easier to take away a visual lesson, or anything meaningful about life, if it’s presented in a narrative.”

And as a truly 21st-century narrative, the book joins several other portrayals of the story, including video shot by a local news helicopter and the neighbor’s YouTube posting.

“It’s a sequence of images, and a sequence of events that links them together,” says Long. “That’s what I really want to aim for.”