Blow-Up: Behind the Most Famous Film on Photography 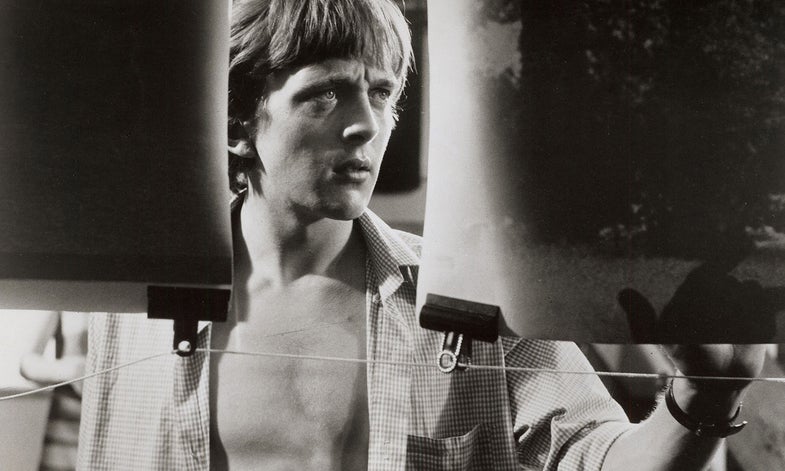 “It’s my job. Some people are bull-fighters. Some people are politicians. I’m a photographer,” says Thomas, the protagonist of Michelangelo Antonioni’s cult classic and best box office-grossing 1966 film “Blow-Up.”

Played by David Hemmings, Thomas is a hip, brash fashion shooter in London’s ‘Swinging Sixties,’ an era when British lensmen dominated and reinvigorated glossy model spreads in magazines. A distant dream for photographers today, he drives a Rolls Royce through the city, and has young aspiring models stalking him to have their picture taken. Despite his success and the hedonistic rewards that come with it, Thomas grows increasingly bored of his commercial work and drawn ever more to the social documentary potential of photography, to reportage and street shooting. After moonlighting, quite literally, spending nights snapping stealthy frames in a homeless shelter, Thomas comes upon a couple embracing in Maryon Park, and kneels to capture a candid moment.

The act provokes intense anxiety in the woman being pictured, played by Vanessa Redgrave, who demands to see the image and attempts to snatch his camera. He replies with our opening quote to defuse the situation. But his curiosity peaked. He locks himself in his darkroom later to develop and enlarge the negatives. Scrutinizing his ‘blow-ups,’ Thomas finds what appears to him to be a man in the bushes with a pistol. A few frames later, he discovers what could quite possibly be the lifeless body of a corpse. Obsessed with the prospect of of having unwittingly captured a capital crime on camera, Thomas rephotographs his enlargement on slide film, and keeps looking closer.

“Photographs turn out to be ambiguous as evidence, however, as enlarging them does not make the motifs any more clear or more legible,” writes Klause Albrecht Schröder, the director of the first ever major exhibition to explore the 1966 film through the sole perspective of photography. “On the contrary, it renders them increasingly blurred and abstract.”

“Only on the surface do the blow-ups serve to build up the suspense of a thriller,” Schröder goes on to write. “Their real purpose is to enable the director to develop a visual discourse on the question of how reality is represented and on the fundamental ambivalence of photographs.”

Nearly half a century ago, in what he called his most autobiographical film, the renowned Italian director Antonioni came to the conclusion that reality through a lens is only ever a construct of the medium, that essential, we see what we want to see. His argument is an artistic premies many contemporary photographers still encode into their work. It also anticipates the crisis of representation we come up against to this day even as critics of photojournalism when we attempt to zoom in and analyze, pixel by pixel, what can be deemed true in a mechanical reproduction of so-called reality.

“Blow-Up: Antonioni’s Film Classic and Photography,” on view at C/O Berlin through April 10, 2015, is a dizzying look into Antonioni’s multilayered exploration of photography. The filmmaker employed it not merely as a plot point, but as a tool for theoretical reflection, “weaved into the very fabric of the film,” writes Walter Moser, co-editor of the accompanying catalog. Published by Hatje Cantz, the 1020-illustration, 280-page book comes packaged, cleverly, with a plastic magnifying sheet.

Featured work in the exhibition and book include storyboarded stills from the film, but also the production stills made by the British photographer Arthur Evans. Antonioni hired him specifically to shoot for the duration of the filming for promotional images, and in certain cases restaged scenes for the stills alone. Several other featured photographers were invited to shoot specific moments, including Terry O’Neil, Magnum’s Eve Arnold, and the Italian paparazzo Tazio Secchiaroli, to name a few.

The exhibition also places the film in photo-historical context, showcasing the work of British fashion photographers David Bailey, Brian Duffy, and Terence Donovan—known as the “Black Trinity”—who Antonioni drew direct inspiration from, sending them and others a curious questionnaire, visiting their studios, observing them in action. For a contemporary perspective, curators also include images by artists who were inspired the film and make reference to in their work to this day.

Finally, there are the photographs that appear in the film itself, on display in Thomas’ studio, such as John Cowan’s “Camel Train, 1966” and Peter Sedgley’s “Cycle II, 1965,” which alludes to the abstraction of Thomas’ supposed crime scene capture. Most interesting though, are the prop images made for the actual blow-ups. For these, Antonioni specifically cast the renowned war photographer and social documentarian Don McCullin for a fee of 500 pounds. Twenty-four of his classic East-London images were also used as stand-in’s for Thomas’ book dummy of documentary work.

For the scene in park, McCullin was on hand to advise the actor playing Thomas how to hand a camera properly, what kind of body language to convey. There, he also crouched down in the same spot as Thomas to capture the couple from the same angle, using the same camera, a Nikon F. Antonioni instructed McCullin what to do, but for utmost authenticity, never explained what was happening. Like Thomas, McCullin knew nothing of the man in the bushes captured his frame before handing over his negatives. Tellingly, in an interview with Moser last year, McCullin described his experience of shooting the pictures on set as confusing—it was “surreal.”

“Blow-Up: Antonioni’s Film Classic and Photography” is on view at C/O Berlin through April 10, 2015. A catalogue of the exhibition is available through Hatje Cantz.

“The Art of Film: Blow-Up”is a five-week Michelangelo Antonioni film screening series at the Seattle Museum of Art, presented with the Northwest Film Forum. Starting with “Blow-Up,” on February 24, the museum will screen a different Antonioni film each Tuesday through March 24, 2014.