Behind the Meme: A Conversation With the Man Behind Self Pop Tart

Now that images can literally travel the globe in a matter of seconds, all kinds of strange photographic memes can... 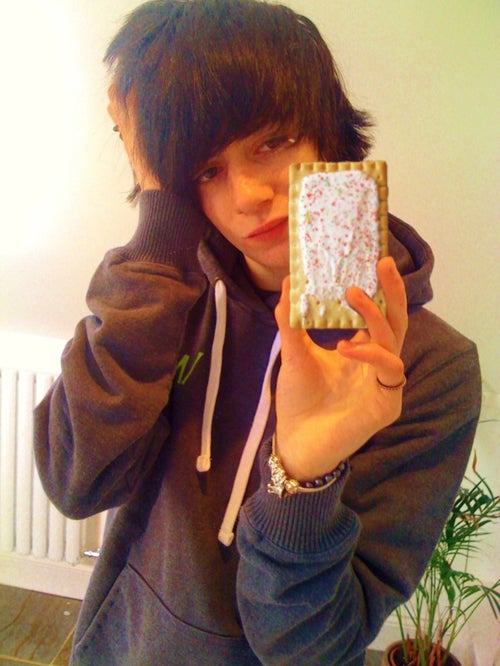 Now that images can literally travel the globe in a matter of seconds, all kinds of strange photographic memes can emerge, spread like wildfire, and flame out—some times over the course of a single day. Planking, one of the more resilient memes that swept the internet earlier this year, is a great example. In the last week or so, a new phenomenon, Self Pop Tart, has, well, popped up. The idea is simple: you upload a photo of yourself (or an unsuspecting stranger) taking a self-portrait in the mirror with a cellphone… except that you’re not holding a phone. No, instead, you’re holding a Pop Tart.

What can we take away from these images? Are they a comment on our narcissitic internet culture? Possibly. Will Self Pop Tart go down in history as a significant movement in the history of American photography? Perhaps not. But even if the Self Pop Tart of a guy in a Pokemon costume may not excite historians, it was liked and reblogged almost 700 times.

We spoke to the creator of Self Pop Tart to see what’s going on here.

My name is Kevin Patrick Hanley. I’m an artist and musician. Sometimes I’m a graphic designer, web developer and flash animator. I’m self-taught on anything involving computers and photography.

What made you think of replacing a phone with a Pop Tart? I mean, in hindsight it seems perfect, but it’s not an obvious leap.

Well, I’ve been wrestling with the self-photography thing for years. It’s funny to me that a serious self-portrait, painted or staged, is rarely thought of as a vain endeavor—yet the artist spends hours and hours obsessing and planning it as some grand statement. On the other hand, when a Midwestern teen takes a candid snapshot of themselves, everyone cries “what vanity!” To be fair, a lot of mirror self-pics are, in fact, vainglorious, ridiculous, and therefore ripe for ridicule.

Fast forward to a month ago: I took a quick shot in a bathroom in Brooklyn because the decor was like something out of Blade Runner, and I wanted to send it to a friend. But I felt silly about the camera being so blatantly present. There’s some stigma attached to the modern digital self portrait, and I started thinking about what to replace the camera with. I eventually arrived at the Pop Tart as the perfect replacement, for the obvious dimensional reason, but also, and more importantly, because nothing is more absurd than a Pop Tart when placed in this context. It functions as a pompousness eradicator. What many would easily dismiss as a moment of absolute narcissism instead becomes a surreal and funny look at modern life.

I’ve had people submit for so many different reasons and it’s by far been my favorite part. (Keep in mind, I had no idea more than two or three of my closest friends would ever see the site.) I’ve had very attention starved (and subsequently scantily clad) folks badger me repeatedly to be posted. There’s been countless revenge plots by bitter ex-lovers and such. I’ve had more than a few people try to get their best friend on the site because they either needed a laugh or a date. People from across the globe have sent photos in and it warms my heart to no end to know that I’ve encouraged them to do something absurd, creative, and self-exploratory at the same time.

Did you imagine that people would Photoshop the Pop Tart in, or was your original idea to hold an actual, physical Pop Tart?

The vast majority of submissions have been non-‘shopped, which has led to me doing most of it. I didn’t have any preconceived notion of whether pictures would come in ‘shopped or not, and again, I assumed most would be coming from a small group of my friends and not an international cadre of lunatics and score-settlers. More than a few have sent in shots where they are clearly just holding an actual Pop Tart. This has led to group analysis and debate as to whether or not it’s a valid “self Pop Tart.” The very idea that someone sending in a photo of themselves holding a real Pop Tart is thought of as fraud by the site’s followers is amazing. I mean, just the thought of someone sitting at their desk, analyzing a Pop Tart… it’s just too much.

Have you had any contact from Kellogg’s yet? I’m guessing they must be aware of the site.

My attorney friend mentioned to me after it blew up that Kellogg’s would either shut it down or not say a word. I like to imagine at least one memo has been sent around corporate headquarters regarding it. As it stands for now I haven’t heard a word.

Again, I’m just thrilled that it happened the way it did. No premeditation, no planning… just a quick snapshot of three very strange weeks in one corner of the internet. And if it made people laugh, look twice and reconsider things a bit, all the better.