Is Artistic Vision Innate or Developed?

The art of getting it 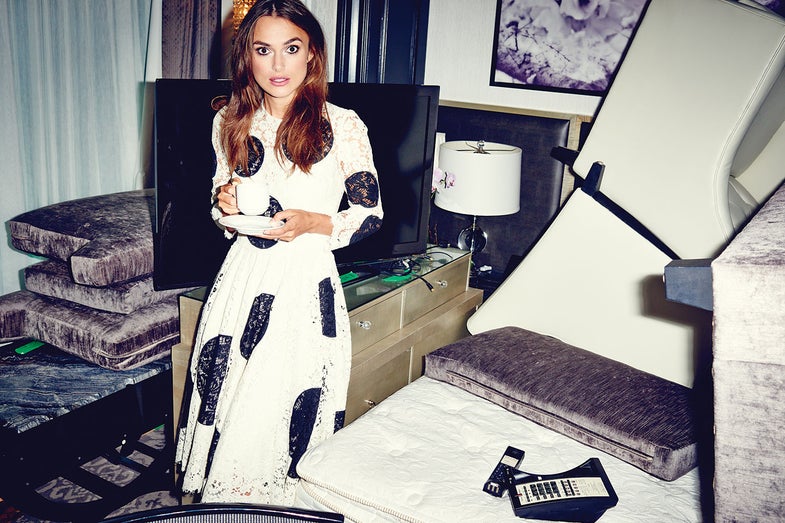 Paul Jasmin and Eric Ray Davidson met and bonded in Jasmin’s photography class at Art Center College of Design in Pasadena, California, in 2001. Jasmin began his illustrious career in fashion and glamour photography at the behest of his friend and mentor, Bruce Weber. Davidson has established himself as a successful celebrity photographer. Here the mentor and mentee discuss portraiture, artistic growth, and how to foster the right chemistry with your subject.

Paul Jasmin: You find out where you belong. You have to grow, and that’s where the work comes from.

Davidson: I don’t know how much stuff originates in L.A., but it does seem like, with the increase in celebrity content, there’s just so much shooting out here. I guess the key in New York is establishing yourself.

Jasmin: The thing about New York is, there are too many photographers there. In L.A., if you’re smart you can get to the right people and show them your work. Art directors and editors kind of like someone who has their own turf and is not too accessible, not right there with the crowd.

Davidson: Once someone has their degree, what’s the best simple advice going into the wild, into the real world? Does going to New York really make a difference?

Jasmin: Well, I think that technology has kind of screwed up that equation because now you can do everything online. I mean, you can make your pictures look good on…

Davidson: On the phone.

Jasmin: You can always make them look good, and you have to know how to edit. You just have to validate yourself. I think that’s why it’s so important to look at those magazines. And I say those—you know the ones, the cool ones—because you’ve kind of realized where you want to go. The same as if you wanted to be an actor and you only saw really bad TV. Well, you’d end up being a bad actor. And you have to know the world that you want to go into. And the only way that you can know that is to go to New York and talk to those people. And when you talk to those people you realize, I’ve got to have my shit together. And I have to know more than they think that I know. You know? There is a great line from the show Gypsy that Ethel Merman had. And it really says it all. In the song “Rose’s Turn,” she says, “Ya either got it or ya ain’t.” You either get it or you don’t. And if you got it and you get it, then you learn to edit.

Davidson: But if you have the foundations of something, how do you put yourself in a situation where you can grow? I’ve always found that one thing I was never afraid to do was fail repeatedly, to learn how to do things right by doing them wrong. Early on I did a lot of stuff wrong but I was never afraid to go there. I remember in one of our first classes together, I did something for an assignment and you loved it! And I did something the next week that was horrible. And you said to me, “I wish you’d never shown me that thing from last week.” [Laughter] And it was true.

Jasmin: There’s a difference between making one thing that’s awful and not having it. Some people don’t have it, and never get it. You have to have style. You look at an early book of Avedon’s work or at Irving Penn’s sense of style, or Mapplethorpe’s flowers. Everybody takes those pictures with them; you realize what style is. Either you get it or you don’t.

Davidson: There are many talented photographers who have a hard time getting in the door. How important is being persistent, ballsy, tough?

Jasmin: It’s really important. Somehow you’ve got to get in that door, but you don’t want to be obnoxious. Well, what you can do is send them one incredible image. “Oh, wow!” People remember that. And if you put it online—a lot of art directors, if they see something there, it’s the same as if you sent them that picture. It’s a moment. A lot of young people don’t even realize when they’ve taken one incredible photograph. I have nine people in my [photography] class. And recently I said, All of you have taken a good picture. And none of you know it.” And I said, “That’s a real problem.”

Davidson: What is your motivation to continue to teach the class? What does being an instructor do for you? What’s exciting about it?

Jasmin: To find someone who gets it.

Davidson: And to be in a position to find someone who’s excited about photography? I know for me personally, there was a point in school where I was beaten down by the process, the competition, the hostility, which comes with being an artist. But you reminded me that photography was a thing to love and to nurture and grow, and that was something to follow. Is that the kind of experience that you’re looking for with your students?

Jasmin: There’s always competition. And now it’s getting tougher. But the other thing is—and by the way, this is why there are so few good film directors—you have to fall in love with the person you’re taking the picture of when you’re shooting them.

Davidson: You have to connect. Does that excite you when it happens? I find that whenever I go to give a little talk at a class—or when I was TA-ing with you and working with you closely—it’s very exciting to pass forward excitement. And it’s therapeutic, But it’s hard to always be positive because of all the bullshit we have to put up with.

Jasmin: I’m real masochistic to keep doing that class. [Laughter] But I realized, how else would I meet people like you? How else would I be in contact with people not of my age? Most of the people my age are so frickin’ boring.

Davidson: What are you excited to shoot now?

Jasmin: I have a show in Art Basel in Miami, and I have to do three new pictures. There’re a lot of oldies but goodies, and those sell now, but I need new ones. And I found a subject yesterday—it took me almost three weeks to find the right boy and the right poses. So it’s, it’s harder for me now. But he has the posture I want. And you really need that.

Davidson: You need someone with the right kind of body awareness. Sometimes, I find, it’s certain actors—they just have incredible awareness of their form. One of the best I ever worked with so far is Eddie Redmayne. He just knows how to sit, how to stand, and how to move and his body.

Jasmin: I think he’s fabulous. And that’s why he’s such a good actor.

Jasmin: You have to do that. Then you can just wander through that environment. I’ve learned that from Bruce [Weber] and others. Not everyone can afford to have the entourage that Bruce brings on his shoots. But he creates, in the food and the environment—people are just in bliss to be there. He creates that and then he goes in and sneaks a picture.

Davidson: A lot of it is the details on set. It’s important for people to feel like they’re eating great food, and the music is good, and the studio has good light, and it’s a good environment. But it’s also observing people and picking up on their nature. And you can get better and faster at making those decisions. I’ve recently found my way into photo shoots that are, you know, five minutes, seven minutes. And in some ways I love it because there’s no fuss. There’s no thinking. But you find that moment.

Jasmin: It’s finding the right people, it’s editing, and it’s casting. And in fast shoots, it’s the intimidation. Somehow in 10 minutes you’re going to break that person down to where they’ll give you the real deal. That’s the picture you want. But you can’t tell them what to do. You have to let them do it.

Davidson: I think my fastest shoot I ever did was with Keira Knightley in Toronto. I was supposed to get her and Benedict Cumberbatch together. She ended up showing up first and I wasn’t supposed to get a single shot. But I did. And we were in a very nondescript hotel room, but the room attached to it was chaos. It looked like a tornado had hit it. There was furniture everywhere. And so I had maybe three minutes to shoot there. And after I took that photo, something about it resonated with me.

Davidson: And it was fun. It’s just reacting and using the space around you to your advantage. Sometimes your space—don’t try to make it something else. Make it an extreme version of what it is.

Jasmin: It’s fabulous. And if you know that you did it and you picked that, that’s the name of the game. It’s all about emotion. Emotion—I think it’s the most important word in photography.